Book Review: Ways to Hide in Winter by Sarah St.Vincent 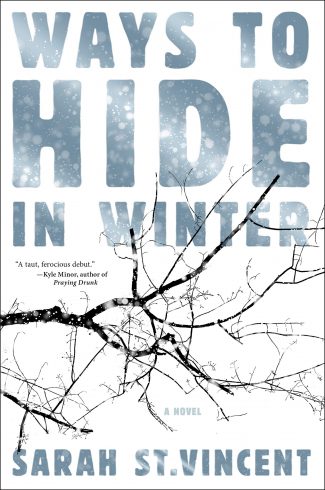 Ways to Hide in Winter

Terror, in all its subtle forms, charges Ways to Hide in Winter, a debut novel by Sarah St.Vincent set deep in Pennsylvania’s Blue Ridge Mountains.

When she meets the young man she will call “the stranger,” Kathleen cooks him an egg sandwich and surprises him by proving his assumptions about her are unfounded.

“My family is Russian. But I’m from Uzbekistan.” He paused. “It’s in central Asia.”

“I know where it is.” The eggs cracked neatly. “Or at least, I have some idea.”

I turned to look at him raising an eyebrow. “Yes, really.” There was, in fact, a map on the wall in my room at my grandmother’s place, one I had tacked up years earlier so I could follow my brother’s deployments.

Kathleen lives near Centerville, Pennsylvania, sharing a house with her crotchety grandmother on the lip of the Blue Ridge Mountains, the rough halfway point of the Appalachian Trail from Maine to Georgia. But her life’s radius feels small: She drives up the mountain every day to mind the store, an outpost for hikers passing through and for the hunters who watch the woods in season. When the stranger, Daniil, arrives one afternoon seeking a place to stay at the adjacent hostel, each of them is vulnerable: Daniil seems conspicuously an outsider, while Kathleen strains to hide the physical injuries she incurred in a mysterious and cataclysmic end to her marriage.

In Ways To Hide In Winter, Sarah St.Vincent wrings slow and foreboding suspense from their meeting, and revives a complicated period in recent U.S. history — winter 2007, in the years where war rumbled on, ideological divides hammered new fractures between rural and urban America, and where terror had become a buzzword for something to be rooted out.

St.Vincent makes us revisit the meaning and associations of that word. Hours after her conversation with Daniil, Kathleen ventures down to the shoreline of a lake and, defiant over the protesting pain in her own injured body, walks out perilously over the ice.

I would never know why I did these things, not really. Most of the time, for the past four years, I had felt as though I were enveloped in a haze of fear, a low sense of terror that hummed and crackled in the background, making me flinch when I lit the gas stove, when I drove in the rain, when I mounted the ladder to fix the gutter.

Terror, the word, captures the tremble of a deer in headlights, unable to move — and where this novel explicitly contrasts attitudes to the terror someone can feel in their home and terror as a tactic in an international conflict and under oppressive regimes, it relies at its heart on how Kathleen and Daniil are indeed stock-still in their lives for a while. Informed by St.Vincent’s focus as a human rights attorney and through her work with survivors of intimate partner violence, Ways To Hide In Winter gives us a human-scale drama that seems a necessary answer to action-focused war and espionage fiction; fraught and unexpected, it rightly rebuts the cliche that world events don’t creep into secluded, sleepy places.

Lying low in one place — to heal, as Kathleen does in her hometown, and to retreat from scrutiny, like Daniil — still means that if the few people you rely on can disappoint you, it can devastate you again. What to do with remembered trauma (and recognizing what isn’t remembered) is one of the book’s strongest through-lines: As Kathleen draws parallels between the newly-reported evidence of interrogation practices at Abu Ghraib and the authoritarian practices she finds reported from Daniil’s homeland, suggestions of America’s own painful past mark the ground around her feet, from a maybe-or-maybe-not Underground Railroad bunker under the hostel, to a U.S. War Department facility that housed German and Japanese prisoners of war.

What do we know? What do we want to know? Do we get to know only what we must? Only what is evidenced? About others? Our country? Ourselves?

These timely questions are carefully unpicked toward an accelerating conclusion. Above all, people’s urge to explain away the actions of neighbors, even at their own cost, is mined here for all its complexity: When Kathleen asks Martin, the owner of the isolated hostel up on a hill, about the prison camp and its rumored purpose, St.Vincent catches the huge difficulty of bringing that kind of horror into casual conversation. Martin, for his part, admits he sides with trusting in others, even when it might mean his own ignorance and huge vulnerability.

“Did you ever hear,” I said eventually, “anything about a sweat box?”

Martin had resumed trying to fit metal pieces together, “A what?”

“A sweat box. Up at the old camp. Like… some kind of shed where they put people in the summer to punish them. To make them too hot.”

“You mean that POW camp they had during the war? No, I’ve never heard anything like that.” He thought about it, his expression puzzled. “Actually, I almost never hear anything at all about that place. Why?”

And a moment later:

“I prefer,” he said, “to have some faith in my fellow man. I assume people are good until I have a reason to believe otherwise.”