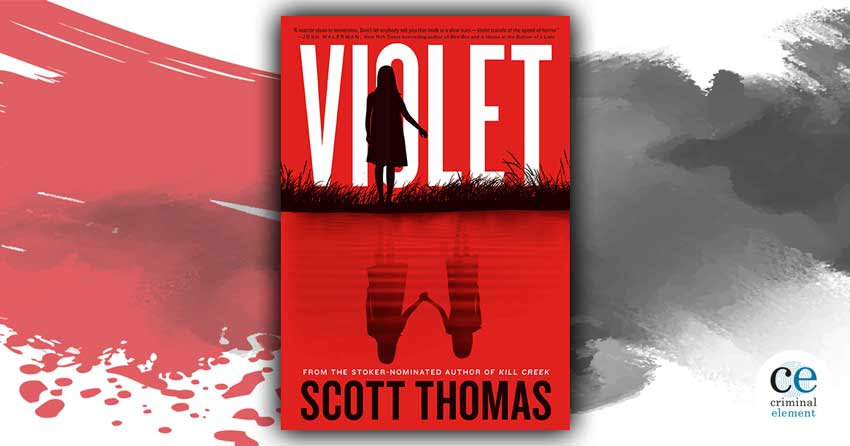 Violet by Scott Thomas is a horror novel about loss, grief, and the power of memories, where a recently widowed mother and her young daughter flee the memories of their past only to encounter even more nightmares.

Scott Thomas’s 2017 debut, Kill Creek, was a fantastic book that was nominated for an Edgar Award. But his latest, Violet, is a story that will linger with readers long after they turn the last page.

A few familiar elements that make really good horror set the scene: an isolated locale and a run-down house that needs some serious TLC. After Kris Barlow’s husband is killed in a car crash, she and their 8-year-old daughter, Sadie, flee Colorado and head to a lakeside cottage in tiny Pacington, Kansas. The cottage holds a lot of memories for Kris. She and her parents—both now deceased—used it as a vacation home when she was a child, and there’s one summer in particular that will never leave her memory.

Kris hopes fixing up the cottage will fix, well, something within her that’s been festering for years and has come to a head after her husband’s death. Sadie has largely stopped speaking and withdrawn into herself, and it’s breaking Kris’s heart. Maybe showing Sadie a place that was the source of so many good (and some very bad) memories might help bring her out of her shell. When they arrive, the house is certainly not what Kris remembers.

There, perched on the edge of a bluff overlooking the water, was the lake house.

Kris stared silently at the structure. Behind her, she heard a click as Sadie unfastened her seatbelt. She could feel the little girl’s eyes peering over her shoulder, staring out, just as Kris was, through the windshield.

For a long moment, neither spoke.

It was Sadie who broke the silence. Her willingness to speak should have thrilled Kris. But Sadie’s voice was hesitant, slightly squeaky, like a door being cautiously opened.

Before them was the decaying wood and stone corpse of the house that had called to Kris over hundreds of miles with what must have been its dying breath.

If Kris thought the outside was rough, the inside is even worse. It doesn’t help that the smell of death permeates the house, which leads to the discovery of a dead bird. Sadie doesn’t need any more death in her life, so Kris makes quick work of getting rid of it. It feels like an omen. Still, Kris decides that some hard work is just what she needs and enlists Sadie’s help in the initial cleanup. The effort seems to awaken a bit of the little girl’s spirit, and a dip in the lake brings out a bit of the joy that’s been so sorely missing from their lives. But the good vibes don’t last long.

Soon, Kris starts seeing shadows where there shouldn’t be any, and Sadie makes an imaginary friend that might not be so imaginary. Then, there are those horrible memories of the summer of ’88, when Kris’s mother was dying of cancer in that very lake house. Kris has never really come to terms with her mother’s death, and each moment until now has coalesced into a swirling vortex of emotions—and something dark and unearthly that’s been waiting for Kris to return.

Violet is a slow burn of a book. Really good slow burns are hard to pull off, but Thomas does it with shocking effortlessness. Every small step taken leads somewhere important, and Thomas’s scene building is profoundly effective.

At the end of the hall, the third door stood half open, just as she had left it after disposing of the blackbird’s corpse. The sunlight in that had been bright then. But the sun had shifted as evening fell. Black lines ran like oil streaks down what little wall she could see. The longer she stared, the more it seemed like one of those shadows was closer than the others, as if it had taken a step away from the wall. It peered at her.

Bullshit. Shadows don’t peer at you. You stare at anything long enough in this house, and you see shadow people behind doors and grinning faces in the walls.

Still, she could not look away. She stared at the shadow behind the door, and the shadow stared back, each waiting for the other to move.

An ear-piercing shriek sent an electric jolt down Kris’s back.

In the pink bedroom, Sadie was crouched down in front of the dresser, her hands still on the round wooden knobs of the bottom drawer.

Kris let out a relieved breath.

Slowly, Sadie pulled the stubborn drawer the rest of the way out. Its warped sides continued to make that god-awful sound, although in a lower register, like a recording of a scream played at the wrong speed.

Kris shook off the shock and started to walk away. But as she reached the entryway to the great room, she paused.

She fought the urge, but the voice in her mind purred, savoring the words:

Sha allowed herself on quick glance, just to satisfy her curiosity.

The sun outside must have shifted, because the shadow behind the door was gone.

As the summer stretches on and Kris keeps pushing back the cobwebs from the house and her memories, the horrible truth that has followed her for nearly 30 years comes crawling to the surface—and it may be connected to multiple disappearances of young girls that have plagued the town for just as many years.

There are lots of moving parts here, and Thomas moves them around in a dreamlike sort of clockwork that is by turns chilling and awash in nostalgia (children of the ‘80s, like me, will thrill to things like the cassette tapes that Kris plays while cleaning house). More than just a horror novel (and it is, to be sure), this is a devastating and masterful study of grief and guilt wrapped in scares both shocking and subtly textured, of things seen just out of the corner of the eye. Scott Thomas should be a household name, and I can’t wait for the next book.