Book Review: Velvet Was the Night by Silvia Moreno-Garcia

August 24, 2021
From Silvia Moreno-Garcia, author of Mexican Gothic, comes a historical novel about a daydreaming secretary, an eccentric enforcer, and the mystery of a missing woman they’re both searching desperately for. 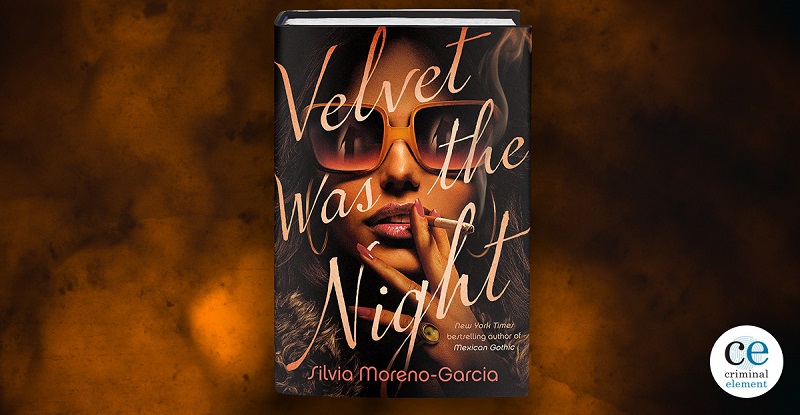 Mexico City in the 1970s was a hotbed of political intrigue, as rival factions struggled for control of the nation. Elvis is a young man recruited to The Hawks, one of the right-wing paramilitary groups sent to infiltrate student organizations suspected of communist leanings. He’s good at his job, though has a strong distaste for the violence that several others in his unit seem to revel in. Personally, he doesn’t really care about politics: he’s just glad for employment. Work prospects have been dim since he came to the city from his rural hometown, and he’s grateful to his boss, El Mago, for giving him the opportunity. Plus he admires how El Mago is a man of wealth and taste, and aspires to be just like him one day.

Maite is a secretary, on the verge of turning thirty and desperately longing for a life of romance and adventure. She’s addicted to the romance comics she buys from the newspaper vendor, to the exclusion of almost anything else. Politics certainly hold no interest for her, even when headlines blare about recent clashes in her own city:

The papers were all talking about the confrontation that had taken place on Thursday. “The president is willing to listen to everyone,” declared Excélsior. She hardly paid attention to the headlines. Sure, she’d heard chatter about the student demonstration, but politics seemed terribly dull.

Love, frail as gossamer, stitched together from a thousand songs and a thousand comic books, made of the dialogue spoken in films and the posters designed by ad agencies: love was what she lived for.

If only love was more for her than a story she reads in comic books! Maite fears aging, loneliness, and poverty, but she doesn’t really know what to do about coming to terms with or preventing any of those things. At least on the money front, she makes a little extra income from pet sitting animals in her apartment building when their owners go away. That’s how she gets acquainted with Leonora, the glamorous student living across the hallway from her.

Leonora hires her for a weekend, promising to be back by Monday at the latest, but when Leonora suddenly calls asking Maite to bring her cat and a box to a certain address, Maite agrees, if less than graciously. To Maite’s dismay, Leonora never shows up for their rendezvous. Maite tries asking around after her and unwittingly gets swept up in the very political chaos she’s never had time for before.

Meanwhile, Elvis has been tasked with finding Leonora and retrieving a camera with incriminating photographs. As he investigates her disappearance, he can’t help noticing the prim, spinsterish secretary whose path keeps crossing his. But men like him don’t have time for romance, not if they want to stay alive in a treacherous world of quasi-legal maneuverings and double-crosses. It doesn’t help that he operates in a virtual alphabet soup of agencies:

Ears were a dime a dozen. Justo had been sniffing around Asterisk for the DGIPS, and this bozo had been talking to Anaya, and there was some Russian fucker too, and for all Elvis knew the CIA and Santa Claus also had spies in that little commie nest. Overkill and a lack of coordination. That was the problem. The DFS hated the DGIPS thinking they were hicks, and the DGIPS thought DFS agents were stuffy pricks.

Velvet Was the Night is a remarkably evocative noir novel set against the backdrop of one of the most turbulent political times in Mexico’s recent history. Silvia Moreno-Garcia deftly maneuvers our two almost-anti-heroes through a dance of revolutionaries, reactionaries, and misdeeds, setting them to chase down the MacGuffin of Leonora’s photographs while each longing for a better life. More importantly, both Maite and Elvis struggle to come to terms with the faults in their own expectations, even as the reader grows to sympathize with these flawed but relatable leads. It’s not quite a romance novel, but it does feel deeply romantic, with a truly wonderful ending.