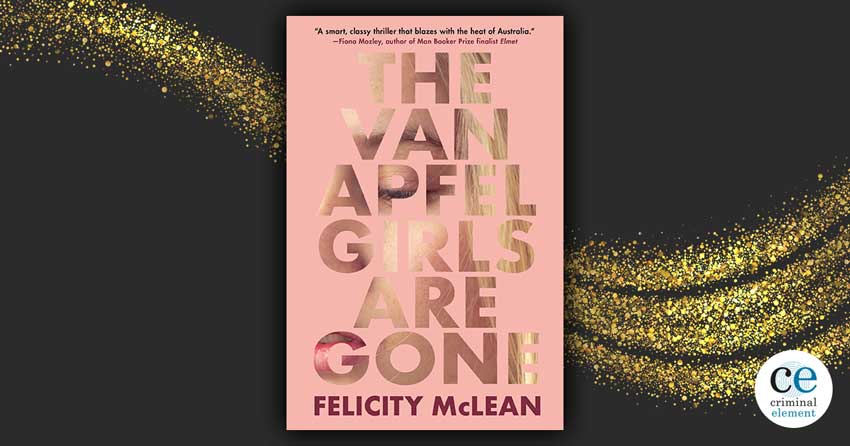 Part mystery, part darkly comic coming-of-age story, The Van Apfel Girls Are Gone by Felicity McLean is a page-turning read with a dark, shimmering absence at its heart.

Thirty-one-year-old Australian transplant Tikka Malloy is living an aimless life in Baltimore working at a lab and finding herself more and more distracted when she finds out her sister, Laura, has been diagnosed with cancer. Tikka hops on a plane and heads home to the neighborhood where she grew up, the neighborhood where three of her neighbors—14-year-old Hannah, 13-year-old Cordelia, and 7-year-old Ruth—disappeared into the bush one transformational night 20 years ago.

Tikka and Laura were friends with the girls and spent many afternoons lounging at their pool. But Tikka was especially fascinated with the precocious Cordie, who seemed so worldly and the one least likely to bend to their father’s iron will. Cordie has continued to haunt Tikka all these years, and her metaphorical ghost has followed her all the way to Baltimore.

I’d seen so many Cordies over the years that it became a nervous tic. Seeing the back of her head. Spotting her in a crowd. I saw her in the line at the supermarket checkout, buying petrol, at the dentist. She surfaced in the lane next to me at the pool, her stroke inefficient but beautiful to watch.

I was unnerved at first. As a kid, I was spooked. But as I got older I found it comforting. It calmed me somehow, and I felt disappointed if too much time elapsed between sightings. On my way to exams and job interviews, blind dates arranged by friends, I’d settle my nerves by trying to find Cordie.

And it was Cordie, always Cordie. Never Hannah or Ruth. Cordie was the one that came back. Who appeared and then evaporated before my eyes.

While in Australia, Tikka looks back on the scorching hot days leading up to the disappearances and relies on her family and a few neighbors to fill in some gaps. Tikka was 11 then, making Ruth the youngest of the group, but Tikka still felt like an outsider much of the time. Laura was best friends with Cordie, and as close as Laura and Tikka were, Laura was not always forthcoming about any secrets she and Cordie might be sharing—and it seems they may have shared a lot. In fact, all these years, Tikka and Laura have been keeping a big secret of their own about the night the girls disappeared, which is hinted at early on.

McLean’s narrative has a meandering, dreamlike feel—as memories often do—and steadily builds a sense of dread throughout. Readers will certainly want to know what happened to the girls—and the sad fate of one of them is actually revealed—but our imaginations are more than capable of conjuring plenty of terrible scenarios.

Mr. Van Apfel was an abusive, religious zealot—Tikka and Laura even witnessed a few alarming incidents—but would he have murdered his own children? A new teacher, Mr. Avery, who was an oddity in a school full of female teachers, was always seen as a little bit “off” and was even frequently spotted speaking with Cordie alone. Could he have been responsible? The girls’ fate is compelling, but what McLean really excels at is capturing what shapes us as children, especially the people that have a certain magic—those whose spirit never quite leaves us even as we grow older and start to forget.

One thing is for sure, the summer that the Van Apfel girls disappeared would change not just Tikka and Laura but an entire town. While no easy answers are offered, McLean weaves a hypnotic story that gives off its own sort of magic as it reveals the darkness that often lies just beneath the mundanity of everyday life. This one is a must-read and marks the author as one to watch.