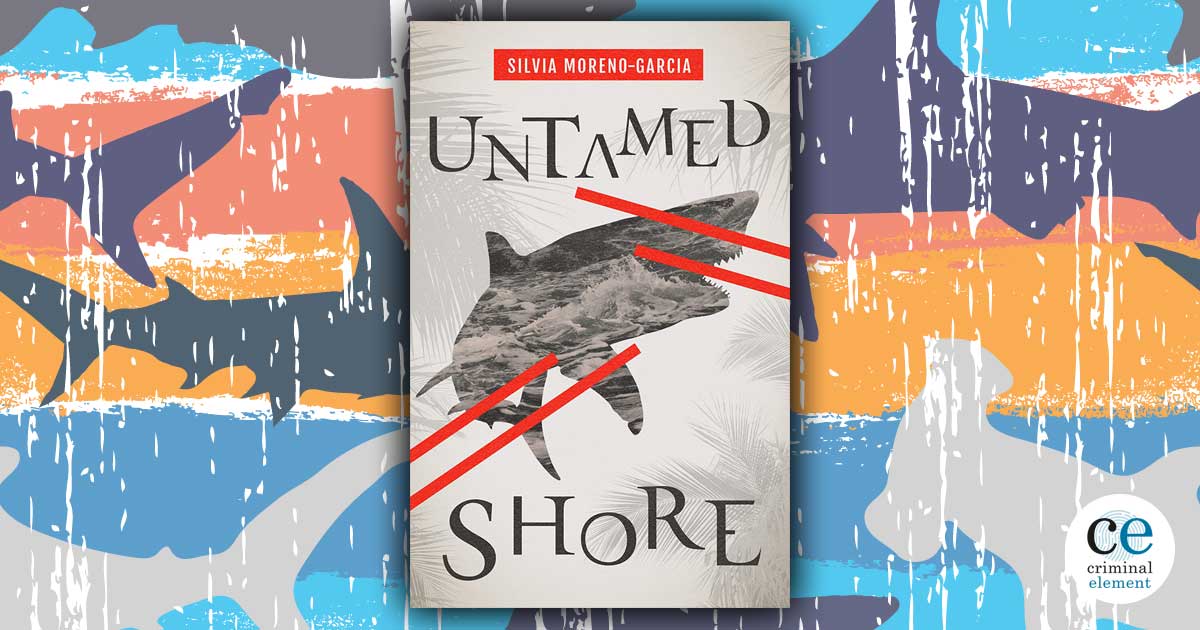 Sharks don’t just swim in the ocean, they can come ashore and slip seamlessly into your life. Untamed Shore attests to this as Silvia Moreno-Garcia juxtaposes the life of Viridiana, local to the sleepy shark fishing town of Desengaño, with the wealthy American tourists who come to employ her. Our young heroine, Viridiana, plays the classic lead trapped in a small town, growing restless for something more. As a film fanatic, Viridiana romances the idea of the Americans saving her from her surroundings, and the life that’s been planned for her. Yet, the romance she stars herself in quickly transforms into a noir when she realizes not everything is as it seems, and maybe the sharks caught on the beach aren’t the only ones she is surrounded by.

Throughout the novel, Moreno-Garcia takes her time painting a picture of Desengaño, and the routine life there that Viridiana craves respite from. She is able to efficiently draw out the suspense by playing on the endless sense of time in the seaside town, where all days feel as though they bleed into one. In doing so, she also shows what this life is lacking—the excitement that the Americans bring with them.

Ambrose, his beautiful wife Daisy, and her equally beautiful brother Gregory bring color to Viridiana’s grayscale world. However, this excitement takes its toll when Viridiana inevitably finds herself caught in their dangerous net of lies. She quickly learns that she will need to play the game in order to survive. Moreno-Garcia first alludes to what is to come in the closing of the first chapter, when Viridiana reflects on a game of chess with her mentor:

“The problem with my technique, Reynier says, is not that I lack talent, but that I persistently deny my blind spots. My technical aptitude is overwhelmed by psychological factors.”

Viridiana moved the microphone away a little.

“I need to see movements more clearly and I don’t see them because I don’t look for them.”

The novel serves as a sort of dark coming-of-age journey for Viridiana. Through her time employed for the Americans, she must come to terms with her relationship with herself. She wants more than the life in Desengaño, and the Americans are her way out. As the story unfolds, we see Viridiana grow from the shy, quiet and innocent young woman she is in Chapter 1 to someone clever, cunning and determined. She is not only faced with emotions she has never experienced, but with dangerous situations she couldn’t have previously imagined and decisions she would have never expected to face. She experiences love, death, and deceit all in the same breath, and emerges differently altogether.

She’d always been so afraid that the land would eat her, but it was obvious now that the answer was you had to eat it.

You have to be the carnivore, the devourer, the one who bites first.

A shark, enormous, majestic, unstoppable, rows and rows of teeth.

Moreno-Garcia frequently references the ocean, sharks, and the fishing town to draw parallels to the situation Viridiana has become swept up in. She does this articulately, able to always bring the reader back to the seaside Viridiana is rooted in. Overall, I found that this book was best encapsulated in one of the final exchanges of two characters, staring out at the ocean:

Weaving suspense, murder, romance, and the throes of young adulthood together, Untamed Shore is a page-turner that will leave you hooked (pun intended) until the very end.