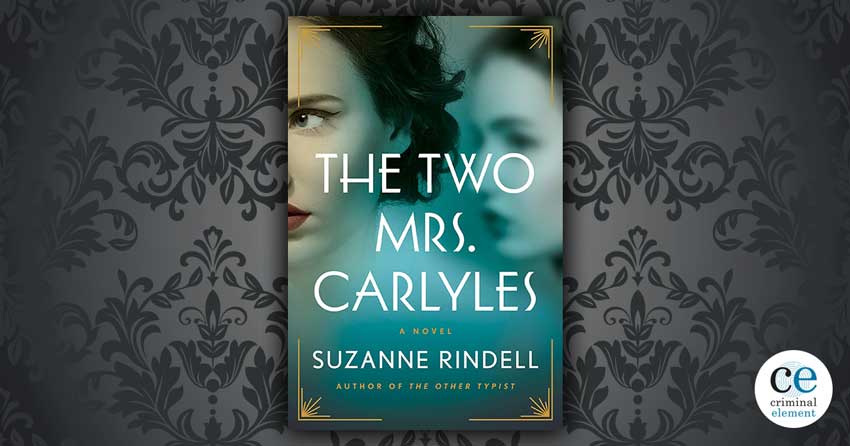 The Two Mrs. Carlyles by Suzanne Rindell is a suspenseful and page-turning descent into obsession, love, and murder in the wake of San Francisco’s most deadly earthquake.

Violet is a woman with many secrets.

After St. Hilda’s Home for Girls burned to the ground, she was left to make her way in turn-of-the-century San Francisco with her only friends, Cora and Flossie. The three teenagers did what they had to do to survive, the older girls working in Mr. Tackett’s dance hall while Violet tended to his boardinghouse where they all lived, cooking and cleaning and mending.

Though none of them enjoyed this life, at least they were together.

But there are those who say that three is an unlucky number, and unluckier still when it comes to groups of young girls. Triangles make for poor allegiances, people will say. After all, a triangle—what is that?

The blade of a knife, coming to a point.

Then, the night of the great earthquake, Violet has one of her strange “spells.” She loses track of everything and returns to reality to find a most gruesome scene.

In the wake of the city-wide devastation, the three women ultimately decide to split up—now armed with enough money to make their own way in respectable society—and vow to never tell another soul what happened that tumultuous night.

Up to this point, Violet’s life was one of bad luck and unhappiness. But then, she crosses paths with Harry Carlyle, one of San Francisco’s wealthiest, most eligible bachelors—an older widower whose gorgeous wife, Madeleine, reportedly died the night of the earthquake. After a whirlwind romance, Violet becomes the second Mrs. Carlyle.

Violet truly loves Harry, not his fortune, and is happy to finally have a stable life. With Harry, she can start a family and find peace. But settling into her new life proves more difficult than she expected—and not just because of the vast difference between her and her husband’s places in society. Harry’s rebuilt mansion is still organized just as Madeleine decorated it. The first Mrs. Carlyle’s beautiful portrait stares down at her from the top of the grand staircase. And the disapproving housekeeper, Mrs. Weber, seems to delight in telling Violet all of the ways Madeleine surpasses her.

Then, strange noises begin to keep Violet awake at night.

I understood that all houses, large and small, are given to a symphony of little noises in the night. Each house is a living, breathing creature in its own right, and makes the sighs and grumblings and groanings that are only natural to its animal state. That’s just the house’s bones settling, say some.

There is something of bones, to be sure, but also of a kind of digestion—as though it were possible that a house might need to work through the events of the day like a heavy meal.

Is the house truly haunted by the first Mrs. Carlyle—or is a living person behind all of the strange occurrences? Could the culprit be someone who knows the secrets of Violet’s past, the horrible truths she’s hidden from her handsome husband?

Does Violet need to fear for more than just her marriage? Should she be afraid for her life—or her sanity?

The Two Mrs. Carlyles is equal parts Jane Eyre and Rebecca, those quintessentially European stories then transplanted to a swiftly changing San Francisco. Just as the city feels starkly divided before the earthquake of 1906 and after, so too is Violet’s story: the first half covers the sordid years spent under Mr. Tackett’s thumb, while the second half details her new and opulent life as Mrs. Carlyle.

As a heroine, Violet is more a successor to the fragile Mrs. de Winter than the indomitable Jane Eyre. With her peculiar spells and uneasiness in high society, there’s always a chance the next shock will break her. But Rindell still makes us root for her, even as we wonder how reliable she is as a narrator.

And while love interest Harry undoubtedly has elements of both Rochester and Maxim de Winter in his makeup, he isn’t nearly as overbearing and rarely as cold as either; as a Byronic figure, he’s far more likable and gentler than most, which is certainly refreshing.

Rindell does a masterful job of mixing (possibly) supernatural otherworldliness with psychological thrills. The lengthy setup establishing Violet’s character and experiences pays off wonderfully when the true meat of the plot begins, leaving us wondering just what exactly is happening and who is truly responsible. Everyone, including Violet, feels more than a little shady and unreliable, and the ultimate reveal is a multi-layered and brutal one.

The Two Mrs. Carlyles is a mystery that combines the best elements of several sub-genres—historical, romantic, thriller, paranormal—into a rather seamless whole that promises to please a wide spectrum of fans. While there are risqué and horrific elements, Rindell never goes into too much detail, well aware that sometimes less is more. And while Rindell has clearly taken inspiration from two of the greatest romantic suspense novels of all time, The Two Mrs. Carlyles is still very much its own story with plenty of surprises. By the time you follow Violet into her new home, you’ll be turning the pages as quickly as you can, eager to see just how everything plays out.