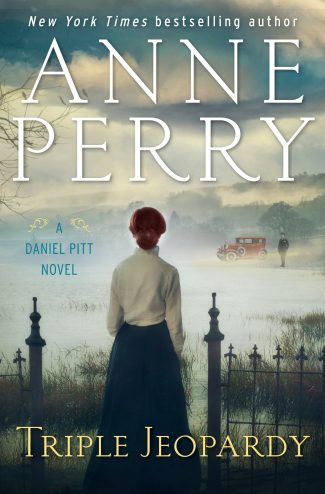 The gang’s all here for Anne Perry’s Triple Jeopardy, her second Daniel Pitt mystery. Readers met Cambridge-trained lawyer Daniel Pitt, Charlotte and Thomas Pitt’s second child, in Twenty-One Days. In that tricky case, his parents were conspicuous by their supportive absence, disappointing fans of the Thomas and Charlotte Pitt series, who feared Murder on the Serpentine (2017) truly was Thomas Pitt’s last hurrah. Not so in Triple Jeopardy: Thomas Pitt’s position as head of the secretive Special Branch is woven into the story. Fair warning—unavoidable spoilers lay ahead.

Jemima, Daniel’s older sister, and her husband and two small daughters are making an extended visit to the Pitts. It’s Jemima’s first time back in London since her marriage four years ago to Patrick Flannery, an Irish-American policeman (A New York Christmas: A Novel, 2014). Patrick asks for Daniel’s help in bringing a British diplomat to justice. It’s complicated.

. . . In Washington, D.C., one of Jemima’s good friends has been assaulted and her treasured necklace stolen. The perpetrator appears to be a man named Philip Sidney, a British diplomat stationed in America’s capital who, in a cowardly move, has fled to London, claiming diplomatic immunity. But that claim doesn’t cover his other crimes . . .

When Philip returns to London, he is arrested for embezzling funds from the British Embassy. Patrick wants Philip to have a good defense . . . well, an adequate defense is perhaps a better way of phrasing it, because he hopes Philip’s more serious transgressions will emerge in the trial and that justice will be served. That’s not a lawyer’s role, as Marcus fford Croft, “the founder and head of the firm,” reminds Daniel and his older mentor Kitteridge, before barraging the younger lawyer with questions. Marcus sums up Daniel’s dilemma:

“So, you are sitting between a sharp rock of family loyalty and the very hard place instead of the truth? You know your sister, but I’m guessing you don’t know this brother-in-law of yours all that well. And since he is American, you are not likely to. Have I got that right?” Marcus’s white eyebrows rose.

“Why are you doing this? To protect your sister?”

Daniel knew there was no benefit in anything but the truth. Less than that would come back to bite him, probably very hard.

He admits that at this point, he wishes he “didn’t know anything about it.” Alas, it’s too late. The inexorable wheels of justice are turning . . . and Patrick and Jemima have a little three-year-old daughter: “Marcus sighed. ‘Ah! That explains everything.’”

For an instant, Daniel remembered Miriam fford Croft, Marcus’s daughter. She was thirty-nine now, fourteen years older than Daniel, brilliant, irrepressible, eccentric, and, underneath it, Daniel had glimpsed, vulnerable as well. He had not seen her since the Graves case, three months ago. Perhaps Marcus did know about little girls? “Thank you, sir,” he said quietly, and escaped to see what he and Kitteridge could do between them.

Miriam is one of Anne Perry’s most interesting characters. A brilliant forensic pathologist, she is denied the opportunity to work in her field because of her sex. She does occasionally work as a consultant, however, and Daniel appreciates and respects her skills.

As the embezzlement scandal heats up, Daniel takes his questions to intrepid scientist Miriam fford Croft, who brilliantly uses the most up-to-date technologies to follow an entirely new path of investigation.

Miriam swiftly identifies which of Philip Sidney’s signatures are forged, a crack in the case. Other than spotting discrepancies in the evidence, her most important contribution is exploring why Philip is being framed. Why is there so much evidence against a low-level diplomat? The charges mount: a) assault and theft of a young woman in her bed chamber b) taking advantage of diplomatic immunity c) embezzlement, and lastly, d) murder. And Miriam sees the obvious. Perhaps her status as a professionally trained outsider and the daughter of an esteemed lawyer, make her insightful? Someone(s) wants this young man buried forever: who are they and what are they afraid of?

Technological advances play a big part in bringing justice to Philip Sidney. Cables and wires between London and Washington, DC, cars that allow Miriam and Daniel to be detectives miles away from London, and forensic advances are a few examples. Technology works in tandem with the heightened observational ability of Daniel (and his extended family).

Anne Perry uses humor and sustenance to lighten the tension of Philip Sidney’s grim trial, as his Daniel’s team races to find evidence to clear him. Young men are always hungry, and lawyers work long hours, but the public houses of London have a remedy. With their ales in front of them, Kitteridge and Daniel unpack developments, Kitteridge making the unwelcome suggestion that Daniel ask his father why the Foreign Office is involved. Food is a welcome diversion from “embassy politics” and “international” concerns.

He bit into his sandwich. It was really good—fresh, coarse bread, crusts crumbling, thick-cut mutton, and just enough horseradish to give it a tingle.

Triple Jeopardy explores the many facets of loyalty, particularly the relationship between grown-up siblings, when one is married. Daniel recognizes that his father’s skills can’t be overlooked, ignored, or underplayed, and that using his father to save a man’s career is not wrong and doesn’t make him less of a competent adult.

The crux of the mystery foreshadows the First World War and the myriad ways that England, an island nation, is forever changed by that epic event. Triple Jeopardy is an absorbing addition to the Daniel Pitt series, inevitably making readers wish the next in the series comes quickly.

Read our review of Twenty-one Days, Book #1 in the Daniel Pitt series.