Book Review: Through the Evil Days by Julia Spencer Fleming

October 30, 2013
Through the Evil Days by Julia Spencer-Fleming is the eighth novel in the Clare Fergusson/Russ Van Alstyne series set in upstate New York, in which a house fire leads to homicides and the kidnapping of a seriously ill little girl. 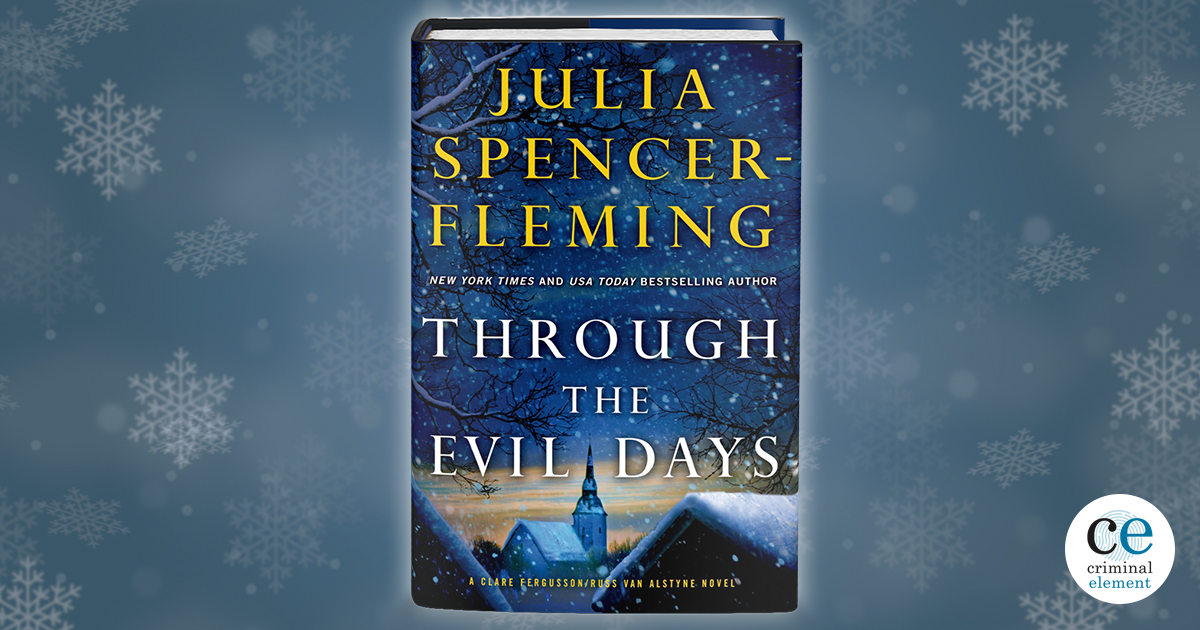 Through the Evil Days maintains Julia Spencer-Fleming‘s reputation for penning engaging police procedurals that feature strong characterizations. Plenty of bad actors people her new tale, one that soon expands out of closely-knit Millers Kill to a lake fifty miles north, during deep winter, a season Spencer-Fleming always evokes with great realism. Bitter cold backs every scene like an inescapable returning character, one soon joined by ice, ice, and yet more ice.

While providing a story that will meet her fans’ expectations, however, Spencer-Fleming offers subtle shifts in her paradigm. In addition to creating a more densely-layered plot, a critical time element is introduced early in the book.  That, and the early patency of the culprits responsible for setting the action in motion, swings the emphasis away from that of straight-up mystery.  She has given the book a nudge into thriller territory.

The second development is Spencer-Fleming’s continued deepening of story lines related to characters other than Clare and Russ. The relationship between the Episcopal priest and the Millers Kill Police Chief continues to anchor the series in a way her fans will certainly appreciate. Indeed, their bond has developed to the point where, minus any mystery whatsoever, the pair could surely carry a book on their own. Yet, in the same way that Spencer-Fleming enriched the interactions between them in her previous book, One Was a Soldier, by examining Clare’s service in the Middle East, she now takes us deeper into Russ’s backstory:

“Is this about what happened to Linda?” [Clare] knew Russ’s late wife had lost several pregnancies.

“Five. Two were early, before we’d told anyone she was pregnant . . . It was always something different. Infection. Failure to develop. Cord death—Jesus, that was a hard one.”

She put her hand on his cheek and turned his face toward hers. “There’s no reason to think any of that will happen this time.”

“So instead we get to burn ourselves out and risk your mental health taking care of a dependent special-needs kid?”

Their relationship, while deeply integrated into the action, no longer constrains it. Their recent marriage informs the plot in ways that seem close to tangential at points, quite a departure for this series. This is possible, at least in part, due to the pressing developments involving other members of the Millers Kill Police Department.

Among these is the significant attraction between officers Kevin Flynn and Hadley Knox, who earlier enjoyed what seemed an ill-advised fling. Kevin, the hometown boy who appears to have come into his own during the series, learns a great deal more about his colleague Hadley in Through The Evil Days.  She also learns quite a bit—about herself:

[Hadley] strode across the room and grabbed them both in a too-tight embrace. Behind her, she heard Flynn’s hands on the garment bag, unzipping, rustling through clothes. Search and secure possible weapons, the first rule when responding to a domestic.

“What are you doing here?” Hudson asked.  He backed away and sat on the bed. Genny was still twined around her legs.

“I’m here to take you home, babies. Get your things.”

Flynn had moved on to the closet.  She heard the ting and scrape of hangers sliding across a bar. She looked back toward him. He nodded. All clear. He held up a Hello Kitty suitcase. “Genny, did you borrow this from your mom?”

Genny ducked her head and giggled.

. . . She gulped. Domestic. She sounded like one of those pitiful women they pulled away from their husbands on Saturday nights. If she didn’t stay in cop mode, she was going to lose it completely.

Her distress will grow by leaps and bounds in the ninth book in the series, one can be sure.  Not least of the reasons for this is the way in which Hadley suspects Kevin has acted to help free her from her past. Well-intentioned as his act may have been, he faces a choice at the end of this book that is likely to leave readers rooting out loud for him to make the once they see as best. The decision he does make, however, resolves nothing.  It will leave readers hard-pressed to summon patience enough to last until book nine hits the presses.

There are so many cliffhangers at the close of Through the Evil Days, in fact, that it reads like the season-ending episode of one’s favorite television drama.  That will have to content Spencer-Fleming fans who need to stretch their endurance at waiting. There are so many matters left wide open to keep readers busy all year guessing what might happen next to the folks from Millers Kill.

Review of Hid From Our Eyes by Julia Spencer-Fleming