Book Review: Three Shots To The Wind by Sherry Harris

March 31, 2022
In the third installment in this Agatha Award-nominated series series, Sherry Harris's Three Shots To The Wind portrays Chloe's search for the murderer of her ex-fiance after he was found floating facedown in the lake next to her house. 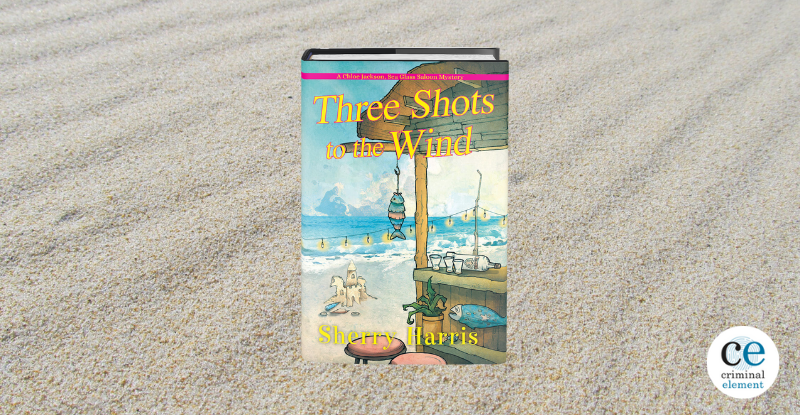 It’s another balmy winter’s day in Emerald Cove, Florida when bar owner Chloe Jackson starts receiving a series of weird surprises. At first, she thinks that the plane flying overhead with the banner proclaiming “I LOVE YOU CHLOE JACKSON” is someone’s expensive idea of a joke. But then her favorite out-of-season flowers arrive at the Sea Glass Saloon, followed by a magnum of her favorite sparkling wine. She’s pretty sure that none of this is the work of Rip Barnett, the guy she’s recently started seeing, but who in her life otherwise would go to such lengths to wow her?

Her fellow bar owner-employees, Vivi Slidell and Joaquin Diaz, quickly help her figure out that the person most likely to have set all this up is the ex-fiance she left behind in Chicago. She and Perry Franklin have been broken up for almost two years now, and apparently he’s decided that going all out with lavish expressions of love is the best way for him to win her back (they’re not, and this incompatibility is only part of why she dumped him.) Chloe just can’t believe that she’s the only reason he’s down south though, given what she knows of him:

The water on the bay was choppy, stirred up by a north wind that blew not only cold air down here but snowbirds who were probably still out on the beach. Was that why Perry was here? Had he wanted to get away from the Chicago winter? It was so unlike him. He loved Chicago as much as I did, and it was one of the few things we’d had in common. A desire to always live there. Perry must have been shocked when he’d heard I’d moved to Florida.

He’s not the only one who’s shocked, however, when they finally come face to face once more. Unhappily for them both, this reunion occurs when Chloe is asked to identify his body as it’s being pulled out of the coastal lake next to her home. Someone unknown has shot Perry three times before leaving him in the water. Now he’s not only dead, but clutching a photo of her, as if in testament to his undying love.

Chloe can’t believe anyone would want to harm her mild-mannered and even, in her opinion, dull ex. The cops, however, quickly call in Rip to question him as to his whereabouts that day. Apparently, Rip and Perry had gotten into a very public altercation in Emerald Cove that was recorded and subsequently posted to the Internet. Chloe knows Rip would never murder anybody, but now she has more than one impetus for finding out the truth behind what happened to Perry.

Her investigations lead her to several uncomfortable realizations about the man she once loved and left, especially during an awkward exchange with a woman who recognizes her as Perry’s ex:

“How do you know that?” I could have tried to finesse an answer out of her, but I just blurted out my question.

“I helped pick up the pieces of Perry’s shattered heart after you left him.”

Whoa! That was almost to the word what Suni had said to me at the hotel. “I’m glad he had someone there for him.” Now I was saying almost the same thing I’d said to Suni. I was glad, but I was starting to wonder just how many women were picking up pieces of Perry’s supposedly shattered heart. Not only that, but I was wondering if his heart was shattered, or if anything I’d ever thought about him was true.

This, of course, leads to Chloe questioning her own instincts, as she learns so much more than she bargained for about a man she thought she knew really well. The secrets she uncovers shake her not just because of what they mean for Perry’s personality, but also for how she always viewed their relationship and, to a certain extent, all her relationships with men. It’s a fascinating look into how personality skews perspective, handled deftly by Sherry Harris as she spins this entertaining yarn.

Also entertaining was Vivi’s continuing dislike of Rip and the lengths she’ll go to in order to set Chloe on a better path with, in her opinion, a better man. The main characters are all very endearing as they each do what they think is best for Chloe. Ultimately, though, Chloe’s focus is on clearing Rip’s name and, perhaps, letting herself actually fall in love once more.