August 31, 2020
Three Perfect Liars is a new suspense novel about three ambitious women whose lives are turned upside down in the aftermath of a horrifying fire, which threatens to expose a tangled web of lies. 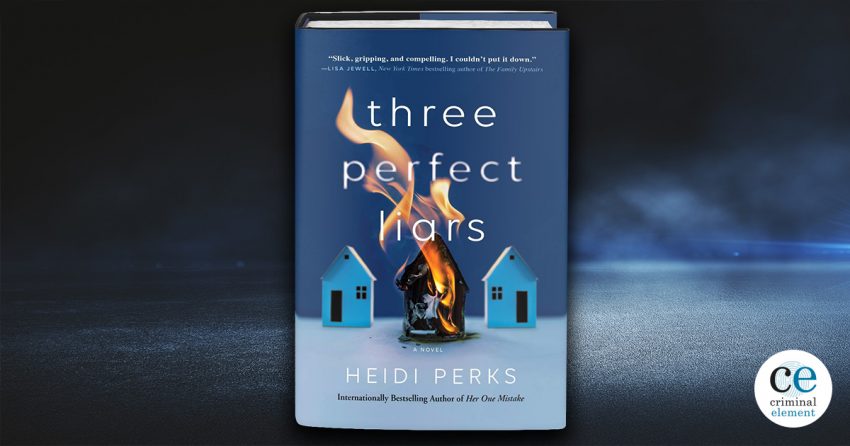 The glamorous, water-side headquarters of the Morris and Wood advertising agency in Lymington burnt to the ground. Lymington is on the west side of the Lymington River in the New Forest district of Hampshire, England. Who is responsible? Did anyone die? Heidi Perks distances readers from the smoldering embers by leading with fire investigators questioning employees. The hook is in the title—Three Perfect Liars. The “three perfect liars” are Mia Anderson, a new employee, Laura Denning, a long-time executive who is returning to work after a six-month maternity leave, and Janie Wood, wife of Harry Wood, a named partner. The glue that connects the women is the advertising agency, but their stories, as becomes clear, intertwine on and off the job.

It’s every returning-to-work new mother’s worst nightmare: that the someone who was supposed to be a stop-gap while you were on maternity leave, is the new you. Mia, Laura’s 20-something temporary replacement, is comfortably ensconced at Laura’s desk.

As she neared it, she felt instant relief to see her desk in the same place it had always been—until Laura realized someone was sitting at it. Someone with a bright pink pencil pot and a Gucci handbag, a gray cardigan slung over the back of Laura’s chair, and, for whatever reason, some Christmas paper chains still hanging over the top of the computer screen, even though it was the third week of March.

Worse yet, Harry Wood, Laura’s boss, mentor, and friend, tells her that Mia will not be relinquishing Laura’s major account. It’s reminiscent of All About Eve, where “a seemingly timid but secretly ruthless ingénue insinuates herself into the lives of an aging Broadway star and her circle of theater friends.” Is Mia the new Eve Harrington, seeking to replace Laura’s Margo Channing? Underlying Laura’s distress is that she thought Harry would always have her back (not in a back-stabbing way).

Long-term employee Henrietta is asked about Harry during her interrogation.

Henrietta: Harry Wood is a good CEO, I suppose, but I didn’t have much to do with him on a day-to-day basis. Of course all the young girls love him. By “young” I mean the ones in their twenties. Not that I’m old, for God’s sake, I’m only forty-two, but you feel it sometimes, you know? Especially when everyone around you wasn’t even born when you were leaving school. (laughs) Anyway, I think they like him because he’s always very nice, and of course he is handsome. Even I can give him that, but I guess they’re blinded at that age, aren’t they?

Marlow: How do you mean “blinded”? Do you think you saw things they didn’t?

Henrietta: I’m sure I did.

Henrietta: (sighs) Such as the way he only really has time for his own, I suppose. The people who work directly under him. He makes a show of speaking to us all, of course, but it always feels a little—off. I think he’s happiest when he’s around the board table with the senior directors.

Laura Denning’s reaction when she finds out she’s not the only woman on the board anymore, that Mia Anderson has been elevated to the lofty level of senior director, is visceral. Mia had told Laura she only wanted to stay in the area for six months, making her a perfect fill-in. What changed her mind? Is it money—is there something off with her home life? Why does she step out of important meetings to take calls from her mum? Mia is a cipher and the more Laura uncovers, the more suspicious she appears, particularly when Mia makes some unforced errors in her important campaign. But Laura is prejudiced, isn’t she?

How does Harry’s perfect, elegant wife fit in? Janie is known for her annual Lady Bountiful everyone-is-invited firm garden party. This year’s party, coming a few days before the fire, is a disaster, due to a huge blow-up between Mia and Laura. Five years ago Janie was a successful defense barrister. She left her career behind when Harry built the firm’s headquarters in Lymington. Was there more to her decision—was she part of a questionable legal judgment? Hints are dropped but answers are murky. She’s now a full-time stay-at-home mum to daughters Lottie and Ella, albeit with the assistance of a nanny. She has the mid-life is that all there is blues, especially when members of her coffee klatch start to peel off and return to work. In the past, Harry relied on Janie to smooth over uncomfortable sex-harassment situations at the firm (always favoring the men involved). Mia spoke up for a female co-worker—is that why Janie asked Mia to lunch? The “bubbly” Mia Janie had met before is missing. Janie is a talented observer, priding “herself on seeing people, on cutting through the thick outer layers that sometimes cloaked the reality beneath.”

Anyone with Janie’s knowledge of fashion would see immediately that Mia’s Gucci was a fake, and that the rose gold bangles that hung around her wrist were the same ones Ella had recently bought from a cheap accessory shop.

It’s clear that the lives of these three women are intertwined and not just in the aftermath of the fire. Mia was desperate to work at Harry’s ad agency. Laura is her family’s breadwinner, and she and her house-husband Nate have just purchased a three-bedroom house. The job she needs is slipping out of her grasp. Janie is questioning the trajectory of her life.

Three women, at three different stages of life, all careening on the edge of desperation—Three Perfect Liars is a compelling summer page-turner!