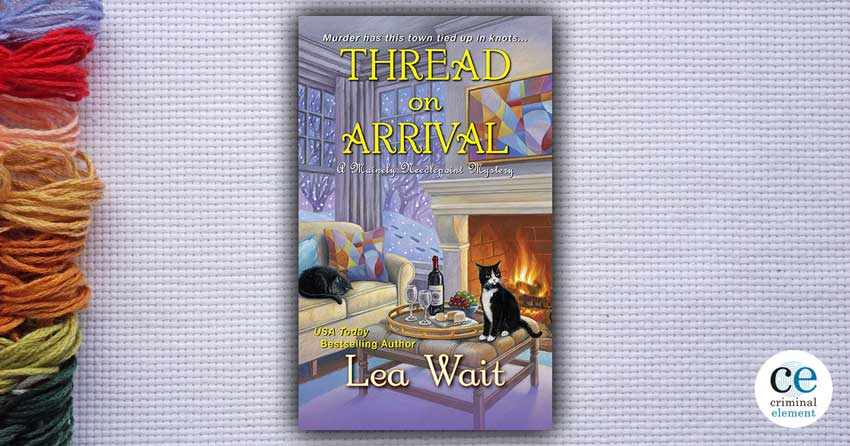 Thread on Arrival by Lea Wait is the eighth book in the Mainely Needlepoint cozy mystery series.

“It takes a village.” In this case, Haven Harbor, a small, oceanside village in Maine. Since Angie Curtis’s return from Arizona to Maine, she’s shown an affinity for crime solving. Angie’s day job is to coordinate the needlepoint efforts of the local craftspeople—there’s a market for attractive, Maine-themed pillows.

Every April, the town gathers by the harbor for the Blessing of the Fleet, a poignant ceremony at a granite memorial that is carved with the words “LOST AT SEA NOT FORGOTTEN.” Over the years, 123 men lost their lives. Angie and her boyfriend, Patrick, are in the crowd.

Like most Harbor residents, I’d attended the annual reading of the names and Blessing of the Fleet since I was a child, walking down from our house on the Green with Mama and Gram. Walking from the same home two of those men hadn’t returned to.

Patrick notices a “gray-haired man who was bent over and dressed in layers of torn and stained sweatshirts.” Angie tells him, “Ike Hamilton is a part of the Haven Harbor community just like anyone else, though he’s fallen on hard times and has to make do on disability checks and deposit bottles.” Their friend Dave, a biology teacher at the high school, chips in that five cents a bottle might not move the needle for most, but it’s a vital supplement to Ike’s monthly check. Dave is surprised that Angie hasn’t noticed Ike doing his rounds.

“Guess I never paid attention,” I admitted. “Maybe I should be saving bottles for Ike too.”

“It’s a good deed,” Ruth agreed. “When he stops to pick up my bottles, we chat a little. He always has a story to tell, or a bit of gossip he’s collected along with his bottles. I suspect he stops at my house about lunchtime because I always invite him in to have a sandwich with me.”

“Who’s the boy with him?” Patrick asked.

Haven Harbor residents are nothing if not concerned for their neighbors. The town has a police force and a Chamber of Commerce, but there’s an informal safety net as well. Is that what leads Dave and Angie to introduce themselves to Ike’s scruffy young companion? Ike tells them, “Leo’s my friend,” and Dave asks Leo his age with the clear implication that Leo should be in school. Before “wicked shy” Leo vanishes into the crowd after flatly stating he won’t attend high school, Dave reaches out.

“I understand,” said Dave calmly. “But if you should change your mind, or if you need help for any reason, come and see me. I live in the yellow house on Union Street. Ike knows where it is. Where’re you from?”

Leo avails himself of Dave’s offer the very next day. He’s out of breath, and his hands and shirt are “covered with blood.” Leo tells Dave and visiting Angie that Ike is dead. Suddenly, Thread on Arrival morphs into a mystery that hinges on homelessness, poverty in plain sight, and elder abuse.

Dave and Angie believe Leo’s account that he returned to Ike’s rundown garage after taking a shower at the local Y only to find an awful sight. Leo’s been “cut, bad, on his face and head and neck. There was blood all around him.” Leo has blood on his hands because he attempted CPR.

Most of the townspeople think the young transient killed Ike. It couldn’t be anyone local. But Dave suspects Leo is a runaway, one of society’s “throwaways,” a boy with no family, no prospects, and no hope. But he’s not a murderer. Leo tells the police that he made his way to Haven Harbor because he was curious to see the ocean. He had no money, so like Ike, he turned to collecting bottles.

“He said I could stay with him if we collected together, if I helped him,” Leo hesitated. “I needed a place to stay. And Ike couldn’t carry as many bottles as I could, or bend as well to pick ‘em up. He was pretty old and his back hurt him. He said we could be partners.”

Where does Leo come from? She finds a few clues online and uses her business as an excuse to find out more. Angie calls up a customer, asks her if she’d like to have her “Save the Cormorant” pillows delivered in person, and off she goes to Dexter, Maine. An older woman at the high school tells Angie that Leo’s parents died in an explosion. Leo was cleared of the accusation that he murdered his parents, but he became an unhappy cog in the child welfare system.

Once Angie and Dave gain Leo’s trust, he gives them a glimpse into Ike’s last days. Angie starts to wonder. What about Ike’s sore back? Was he suffering from old age, or could it be something more sinister? Angie may have been unaware of Ike’s bottle collecting circuit in the past, but to find out what he might have gleaned, she decides to retrace his steps. Perhaps the old man knew too much—and shared his suspicions with the wrong people.

Angie and her friends’ ruminations on the nature of crime make for interesting reading. Dave is spot on with his description of what probably happened in Ike’s garage.

“Murder investigations focus on suspects who have MOMs: motives, opportunities, and methods. No one needed to bring a murder weapon to Ike’s garage. The bottles and the knife were probably already there. So the murder probably wasn’t premeditated. Someone went to see Ike, got angry, and picked up whatever was close at hand.

Angie has the how, but it will take persistence and a certain flair and ingenuity to sort out the murderer from a rather large cast. It seems Ike might have “threatened to tell someone something the suspects would rather have kept quiet.” But as Shakespeare stated so succinctly in The Merchant of Venice, “Truth will out.”