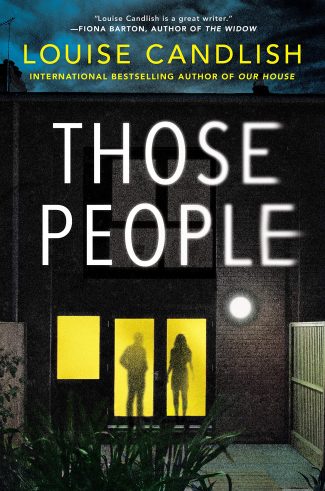 From Louise Candlish, author of the international bestseller Our House, Those People is a story of domestic suspense that asks, “Could you hate your neighbor enough to plot to kill him?”

There are bad neighbors—people who, say, let their dogs use your front yard as a toilet or start their yard work a little too early on weekend mornings in the summer. And then there are bad neighbors, existentially bad, the sort of people whose every action is a transgression and who, by being so awful, make you call into question everything about yourself.

Louise Candlish’s latest novel, Those People, concerns the latter. A dreamy London suburb, Lowland Way is the domestic ideal for the families who live there. Naomi Morgan and her husband, Ralph, are the neighborhood’s de facto leaders. Naomi organizes events and is the brains behind Play Out Sundays, a weekly event in which the neighbors agree to keep their cars off the road so all the children can play in the street without concern. Lowland Way is full of families and a charming Airbnb and dogs and baby swans in a nearby park. It’s perfect.

Until Darren and Jodie Booth move in. When the Booths take up residence in Lowland Way, life goes downhill fast, at least for the Morgans and their friends. Booth begins a series of loud, disruptive renovations on his new home—and starts what seems like a used car business in his front yard. Old cars clog the streets and a beat-up camper appears in front of the Morgan’s house. Booth blares heavy metal music at all hours, ignores Play Out Sunday rules, and rudely brushes off anyone who complains. He’s a sort of lower-class snake in a suburban Eden, forcing Lowland Way’s residents to think and act in ways they never have before.

Actually, that wasn’t quite true. The conversation with her erstwhile paramour had been struck up, the offer of the first drink, precisely because of Booth. Everything was because of Booth now—if it wasn’t in spite of him.

It’s a premise ripe for suspense and Candlish delivers. Her follow-up to last year’s Our House, Those People takes Candlish’s usual themes—the hundreds of small things that fracture relationships, the secrets kept between families and friends, the endless pursuit of skyrocketing property values—and applies them to a whole neighborhood. The cast is sprawling and each chapter of Those People follows one of the players, giving us insight into how bad neighborly behavior affects each character. Sissy Watkins’ Airbnb business—the only thing keeping her in her home following a bitter divorce—may go under if Booth keeps up his noisy renovations and brutish behavior. Meanwhile, the Morgan’s attempts to corral booth only manage to drive a wedge between them and Ralph’s brother, Finn, and his wife, Tess, who live next door. And Anthony and Emma, who live directly next to Booth, see their marriage crumble as a result of Booth’s behavior. Within days of moving in, Booth becomes the sun around which Lowland Way revolves.

See also: Review of Our House by Louise Candlish

“What next, Ralph?” she said, and for a horrible moment he thought she was talking about them, their marriage. His unvoiced response was shameful: I can’t be the one whose marriage falls apart, that’s other people, people like Ant or even Finn. But not me. Mine is the good marriage, the great one.

“Seriously, you’re going to arrive at a five-star hotel this evening with a beat-up face? Is that the plan? To look like some two-bit thug? How does this help us?

“Who cares what a few hotel waiters think?” He adjusted the bag of frozen beans on his face, brought it over his closed eye. “Come on, Nay, no one else is going to take him on, are they?”

“No one else should take him on, at least only through the proper channels. Leave it to the police.”

“The proper channels are meaningless now. The police are idiots.”

Candlish keeps the narrative flowing smoothly. Her talent at juggling multiple characters and voices, on display in Our House, flourishes here. Each character’s voice and motivations are distinct and easy to empathize with. If you’ve had to deal with bad neighbors before, you’ll likely see echoes of yourself in each character’s response, from the awkward attempts at civility to the grinding routine of avoidance to the messy confrontations.

And there are plenty of dust-ups. Fistfights, furtive text messages, dog poop left on front steps, hurled bricks, police reports—it all builds and builds until a horrible accident meant to send a message to Booth instead results in a young woman’s death. But as the police make their rounds in Lowland Way, it becomes clear that the accident was intentional, and someone in the neighborhood was behind it.

Candlish cleverly seeds some political subtext underneath the domestic suspense and suburban schemes. Booth’s brash arrival in Lowland Way, and his failure to adhere to the most basic of neighborhood norms, echoes the ongoing dramas of the Trump presidency, the Brexit debacle, and all the other political nightmares of the era. How do you respond when someone with values so far removed from your own upends your life? What do you do when the traditional systems—police, the government, the media—fail completely and make the situation worse? Can you bridge a seemingly unbridgeable divide? And if not, what’s the alternative?

It all feels organic and earned—Candlish lets her characters do the work and seal their own fates, and there’s a certain enjoyment in watching them do so…

Those People doesn’t provide any pat answers. By the book’s end, everyone is guilty in some way, and Booth, an unrepentant jerk, generates some sympathy. There are a few twists and a nice, nasty surprise at the end, but it all feels organic and earned—Candlish lets her characters do the work and seal their own fates, and there’s a certain enjoyment in watching them do so, even when the reader can all too easily see themselves making the same mistakes.

This is Candlish’s second U.S. book, though she’s well-established in the U.K. Those People should cement her reputation not just as a master of domestic suspense but as a top-notch thriller writer. She takes the comfortable and subtly makes it disturbing—and in doing so, calls into question ideas and values long-thought as settled. She’s not unlike Darren Booth in that way. In this case, though, that’s a good thing.

Check out our Q&A with Louise Candlish