Book Review: This is How I Lied by Heather Gudenkauf 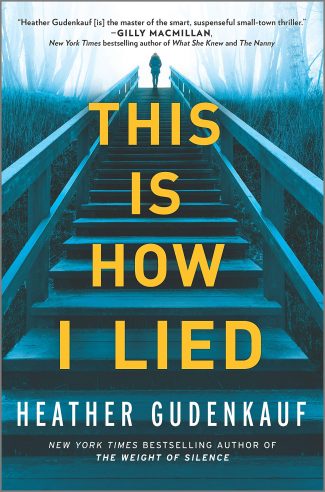 This is How I Lied

With twists and turns that will leave readers dizzy, This is How I Lied follows Detective Maggie Kennedy-O’Keefe as she delves into the past to solve the murder of her best friend.

Critically acclaimed author Heather Gudenkauf is back with a paperback original titled This is How I Lied. Before this novel is over, I guarantee you will be dizzy from all the twists, turns, and red herrings this mesmerizing story throws at you. Like many other mysteries, This is How I Lied jumps between the past and the present. Other writers do this because it’s stylish, but this novel needs to do this as there are many unsolved mysteries from the past that still need to be resolved.

The prologue gives us sixteen-year-old Eve Knox on the day she died — December 22, 1995. She is facing off against an unknown person in the caves nearby her home in Grotto, Iowa. One of the last thoughts that will go through Eve’s head before she is murdered is: “Dark places made it so much easier to be cruel, to exact revenge.” The present portion of the novel begins on June 15, 2020, with Grotto Detective Maggie Kennedy-O’Keefe. Maggie is very pregnant.  She was also best friends with Eve Knox and one of the last people to see her alive.

Eve Knox’s murder had never been solved. This is a sticking point with Maggie, not only because of her relationship with Eve, but also due to the fact that for most of the 25 years her father had been Chief of Police. Since Maggie is about to be relegated to desk duty due to her condition, she requests to look into the Eve Knox case. One of the main suspects was Eve’s boyfriend, Nick Brady. They could never pin anything on Nick even though he was known to be abusive.  Maggie also knew that Eve had technically broken up with Nick, even though he refused to accept that fact. When Maggie speaks with Nick at his family-owned store in town, he still claims his innocence and suggests that their next-door neighbor, Cam Harper, might have something to do with it. Maggie used to baby-sit for the Harpers and it is later revealed that she had an inappropriate relationship with Cam.

Floating through all of this as a pure wild-card in the story is Nola Knox, Eve’s younger sister. Now, Nola is a veterinarian. In the past, she was the weird girl who cut up small animals and had issues socializing with her peers. She also attacked Nick Brady at one point in their school, grabbing him and hurling both of them into the glass trophy case. Maggie has always had a difficult relationship with Nola and not much has changed in twenty-five years. Someone is making Maggie’s investigation very difficult, even going so far as to trap her in a barn that was then set on fire. The past is still very much alive in Grotto.

Excerpts from the past reveal that both Maggie and Nola may have been in the caves with Eve on the day of her murder — but this murder-mystery puzzle is one that will require much more digging and prove a difficult one to solve. Gudenkauf is so great at portraying small-town angst and creates characters that are fully developed and real. This is How I Lied provides much-needed escapist fiction that we can all use right now!