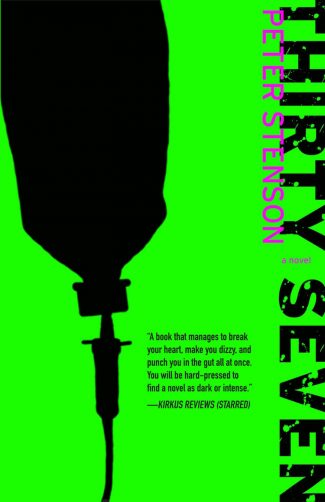 Part Fight Club, part The Girls, Peter Stenson’s Thirty-Seven explores our need to belong. Our need to be loved. Our need to believe in something greater than ourselves, and our ultimate capacity for self-delusion.

When Mason Hues ran away from his adoptive parents at the age of 15, it wasn’t because he was deprived. In fact, his material needs were met, and then some. But his father has been doing things that led Mason to believe that sexual abuse at his hands wasn’t far off, and he had to get out. So, he fled into the mountains of Colorado until he came upon a cabin. To describe it as a cabin is too modest. It was actually a large and beautiful masterpiece made of glass and cedar.

I pressed my face to the glass next to the oversized front door. I saw five or six people, all bald, all skinny, all wearing black scrub-like outfits. I focused on two sitting on a leather couch, a man and woman, the woman holding the man, the man’s face wincing, the woman whispering into his ear, rubbing his chest in circular arcs, this sight the most intimate thing I’d ever witnessed.

It’s right about then that the cabin’s owner drove up, catching Mason at the window. He’s bald just like the others. Mason wonders if the group of people are all going through chemo. They are. Sort of. The man calls himself One and each of the others in the group are also assigned a number. Mason will be Thirty-Seven. What follows is a horror that most of us can’t imagine going through, even in the search of any sort of enlightenment. The group ingests Cytoxan, which is used in chemotherapy. It makes them very, very sick, a process that One says is necessary to get them as close to death as possible. It’s only through this grueling process that they can better appreciate life and achieve perfect Honesty-so says One. For Mason, it’s the first time in his life he’s felt like he was genuinely part of a family. It’s weeks before Mason is allowed to take his first dose of Cytoxan.

One stood up. We all watched. The flames illuminated half of his face. He didn’t wear his beanie. Half of his head shone. He talked about this being the most special of nights. He said it was the most heroic action a young man could take. He said the universe bringing me to their door was proof that their way of life was gaining momentum. He looked at me. I had to fight back a smile. He said, “Thirty-Seven is poised for greatness. The capacity for Honesty in him is as immense as I’ve ever seen. Inversely, so too is his capacity for deceit. It is our job as his loving family of his own choosing to guide him in this transition. We must be diligent in feeding only his wolf of Honesty.”

Right about now you’re rolling your eyes. These are obviously the ravings of a madman, but One is deadly serious, and it shows in the events that follow. Mason makes it through his trials, and they’re as horrific as you can imagine and more. Then the DEA shows up. They probably should have sent more than two agents. That bloody visit only begets more bloodshed, and Stenson doesn’t reveal the full horror of that until the very end of the book. You’ll want to brace yourself.

Supposedly, Mason survives that horrific night and is put into a juvenile facility. As the times and crimes of The Survivors “cult” become media fodder, Mason moves through three years of juvie and psychiatric treatment. He’s now 18 and on his own in the modest apartment that a small settlement has paid for. Those funds aren’t going to last forever, though, and he needs a job, which brings him to Tally’s Tatters, a used clothing store. His new boss, Tally, sees something in Mason, and he soon becomes something more than just her employee.

What Tally and Mason have is not a romance. This is definitely not a love song. Tally is searching for something, just like all of the members of the cult dubbed “The Survivors.” As Mason takes readers through his unique relationship with Tally, he also doles out information from his time with One, aka Dr. James Shepard, and the rest of his “family of his own choosing.” It’s pretty obvious that Shepard sprinkles his truths with plenty of lies, and later on in the book, the truth about who he is and where he’s come from comes out. Does Mason know this? This reader thinks he does. Unfortunately, Mason is so scrambled that it’s hard for him to separate the truth from the lies. When Tally finally finds out just who Mason really is, she soon decides that Mason can be One, and they begin their own sort of cleansing. It’s a terrifying spiral and Stenson spins a feeling of dizzy helplessness as Mason and Tally eventually go off the rails completely.

Stenson pulls off something I’ve always thought was pretty hard to do: he makes Mason simultaneously profoundly sympathetic and undeniably confounding and distinctly disconcerting. It’s easy to see why someone like Mason would seek something better, something outside of himself and his family. What’s not easy to see is how someone could involve themselves in something that would drive them to shocking acts of violence. And Stenson does deliver the shocks, but I never felt like any of the events were portrayed in the interest of gratuity. That would have been a disappointment from an author that I already knew was capable of great things (see 2013’s excellent Fiend.) It’s obvious that Stenson did his research: this felt like a real confessional, and Mason’s struggle with life on the outside after a few years of institutionalization is very real and something that is often skimmed over in books and television.

Thirty-Seven works on multiple levels. It satisfies the nearly insatiable fascination with cults that we have as a society and what drives people to join them, bringing a very personal viewpoint to a harrowing story. Mason is the most unreliable of narrators, another thing we readers tend to love, and Stenson throws in a few believable twists at the end that will cause readers to question their impression of things (at least I did.) It also works as a thriller—and it is thrilling. Mason is a great guide into the deep, disturbing dark, and things do get very, very dark. Be careful. Once you pick this one up, you’ll loathe to put it down, so set some time aside. Stenson is a great talent, and one of the best-kept secrets in transgressive fiction, and fiction in general. Hopefully that won’t be the case for very long.