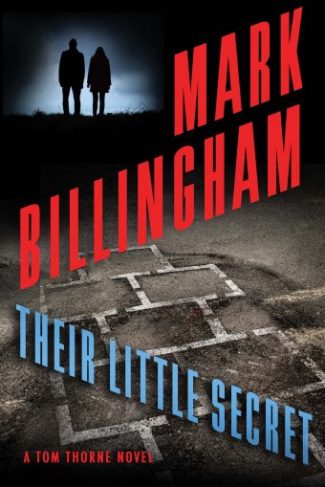 In Their Little Secret, the latest Tom Thorne thriller from internationally best-selling author Mark Billingham, a seemingly straightforward suicide turns into a sinister story of obsession, deception, and murder.

There’s something comforting about returning to a recurring series of novels with characters you have grown very familiar with. It’s exciting to see your favorite protagonists thrown into different places and circumstances, having to rely on the personal history and particular traits to solve the new problem they face.

Welcome back to the long-running Tom Thorne series from British author Mark Billingham. The Thorne novels are always a cut above and provide both returning and new readers the opportunity to dive into a murder mystery series that consistently balances between Thorne and his team of London crime-fighters against killers that are always unique.

‘ …not only can I tell you why my sister jumped in front of that train,  I can tell you the name of the man responsible for it’.

In Their Little Secret a routine assessment of a suicide, DI Thorne feels there is something much deeper at play. A young woman by the name of Philippa Goodwin threw herself in front of an underground train. When Thorne questions the sister of the victim he is chilled when she states: ‘ …not only can I tell you why my sister jumped in front of that train,  I can tell you the name of the man responsible for it’.

What Thorne is able to dig up is the fact that Ms. Goodwin was the victim of a ruthless con-man who not only tore her down emotionally but took everything she had and humiliated her. It is easy to see how her sister felt this man may as well have pushed her in front of the train himself. The game now for Thorne was to locate this con-man who may very well have turned his attention to his next victim.

That brings us to Sarah. She is a seemingly normal single mother on the surface but beneath that facade has much darker motivations. Sarah is in search of thrills in her life and bears both dark secrets and chips on her shoulder that will slowly be played out amongst the pages of this ticking time-bomb of a thriller. She takes up with a man who calls himself Conrad. It will appear to the reader that there is something altogether odd about their relationship. It is no secret that Conrad is the very con man responsible for Philippa Goodwin’s death. He has also left a string of shattered women in his wake. However, Sarah is not the meek creature Conrad may think she is. They fall into a far less than ordinary relationship—one in which Sarah seeks to save Conrad from himself. Conrad recognizes that Sarah is not easy prey and would like nothing more than to get out of this situation and move on to the next victim. The problem is that Conrad has changed Sarah’s life in ways he will never imagine and the secrets she holds make her more than a match for his con games.

The title of the novel, Their Little Secret, can represent both the Sarah/Conrad relationship as well as the partnership between DI Throne and his colleague Tanner. I won’t give away any more than this and will leave you in the very capable hands of Mark Billingham who has put together yet another complex-thriller in which Thorne’s own personal and work lives take on a life of their own and need to be dealt with in order for him to bring down another sinister killer.