Book Review: The World Cannot Give by Tara Isabella Burton

March 16, 2022
Tara Isabella Burton's latest novel, following sixteen-year-old Laura Stearns, is about queer desire, religious zealotry, and the hunger for transcendence among the devoted members of a cultic chapel choir in a prestigious Maine boarding school. 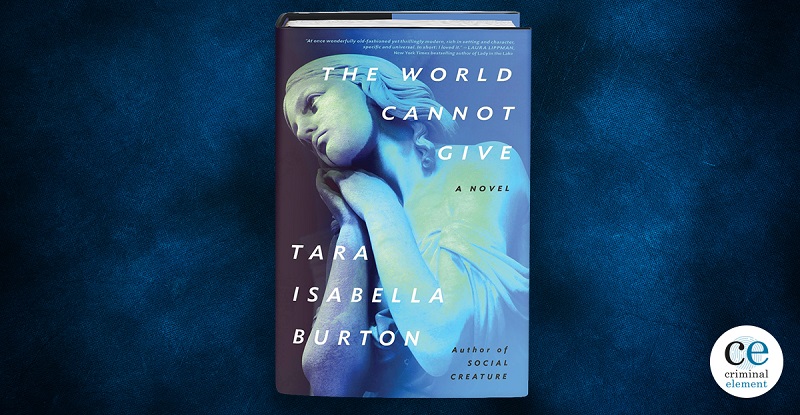 Oh, this book stabbed me repeatedly in the memories of my own adolescence, when I too was a young woman searching for transcendence and meaning and ran headlong into immovable orthodoxy instead. My situation was different, however, from the teenagers’ experience at the heart of this book. Where I gradually fell away from tradition, repulsed by a dogma that in practice enforced injustice and misery, the young choristers of St. Dunstan’s Academy instead hold more tightly to the beliefs that grant them exclusivity, under the wild-eyed leadership and control of the impossibly beautiful, austere Virginia Strauss.

It’s into this rarefied circle that sixteen-year-old Laura Stearns steps, a transfer student to the very school where her idol, Spencer Webster, set his masterpiece before running away to fight and die in the Spanish Civil War. Webster’s sole novel, All Before Them, is one of those books that appeals to the young idealist searching, like its protagonist Robert Lawrence, for the shipwreck of the soul that will galvanize them into righteous action. The vast majority of sensible people will, of course, have little time for such nonsense. But silly, sensitive Laura finds kindred spirits in Virginia and the boys of the chapel choir, as well as beauty in their Evensong:

They sing it together: My soul doth magnify the Lord, Laura’s deep voice and Virginia’s light one. The strangeness comes over Laura once again: how two different melodies can become at once single and disparate, something that overflows, as if there is too much of itself for a single note to bear. They go on to And my spirit hath rejoiced in God the savior; then, Laura is no longer Laura, but only a vessel for whatever overflowing thing is passing through her, and the sound is both hers and not hers, and she is and is not part of it, and Virginia’s hair smells like candle wax, and Laura thinks, This, this is the sound Robert Lawrence heard; this is the thing that could shipwreck your soul, if you only let it[.]

Soon, Virginia is molding Laura into the kind of serious person she herself strives to be, someone who forsakes sleep and food in pursuit of academic and spiritual perfection. Never mind that many of their fellow students, led by the charismatic Isobel Zhao, think them weird, snobby, and stuck in the past with its outdated, autocratic traditions. The beauty of choral song and Webster’s legacy bind the choristers together as deeply as the vows of any secret society would, even in the face of their peers’ hostility.

But when the new choirmaster, Reverend Lloyd Tipton, begins to push back against Virginia’s iron grip, citing his pastoral responsibilities to the community as a whole, a spark is ignited that will quickly engulf the whole school. Students take sides as the conflict escalates, to the point where even Laura begins to second guess the motives of the girl she admires and loves so dearly. Her decision to stand up for herself, however, falters in the face of Virginia’s unexpected reaction to her defiance:

Whatever resistance she’d planned wavers. She had expected Virginia cruel, Virginia righteous, Virginia exultant and terrible, her face as hideously triumphant as it had been in those few, horrible moments outside the Wayfarer.

Laura tells herself this is true.

But what will Laura tell herself when not even Virginia’s instinctive ability to manipulate the choristers can keep them all together? As the two girls grow ever closer in the face of opposition, what lengths will each of them go to when threatened with a broken heart or, worse, a mortified soul?

This exquisitely modern examination of the adolescent need to give oneself over to beauty and certainty, heedless of reality or consequences, is one of the best boarding school crime novels I’ve ever read! The World Cannot Give is also transcendent in its treatment of the beauty of choral singing, reminding me of my own school days in that, as well as in the shifting loyalties and sudden heartbreaks of its painfully realistic depiction of troubled, yearning teens. I greatly enjoyed Tara Isabella Burton’s previous book Social Creature, and find the continued riff on toxic female friendships here even more relatable than I did there. Laura, unlike Social Creature’s Louisa, is motivated less by an ordinary desperation than by an existential hunger for romance and meaning. Both protagonists, however, serve as cautionary tales against reckless desire and the folly of unfettered self-absorption.