Book Review: The Woman in the Library by Sulari Gentill

June 10, 2022
Sulari Gentill's The Woman in the Library is an unexpectedly twisty literary adventure that examines the complicated nature of friendship and shows us that words can be the most treacherous weapons of all. Read on for Doreen Sheridan's review! 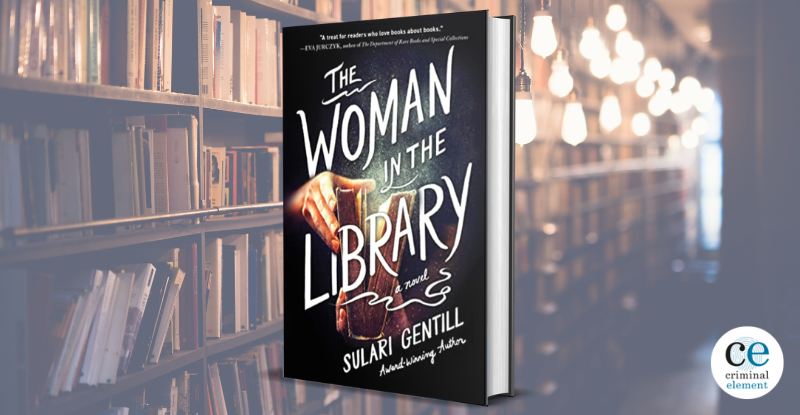 What a delightfully meta-textual examination of writing in the 21st century! With The Woman In The Library, Sulari Gentill has written a truly thought-provoking modern crime fiction novel—one that entertains and enthralls at a high level while still keeping at least one foot grounded in reality.

The book’s core is the story of four people brought together by a hair-raising scream while they’re all seated in the Reading Room of the Boston Public Library. Our narrator, Freddie, is an Australian author who’s received a fellowship to research her next novel in the United States. She’s idly glancing over her fellow Reading Room occupants and giving them nicknames in her head when a scream rends the air. Forced to stay put while the authorities search the building, Freddie and three others strike up a friendship that inspires Freddie to finally start writing her book:

The story is still coming in waves, surging ideas crashing onto the page faster than I can type. I’ve not yet found actual names for Handsome Man, Heroic Chin, and Freud Girl, but it doesn’t seem to matter. Perhaps it’s because I am not yet ready to diverge them from their inspiration, to stem that momentum of discovery, the excitement of new friendship that seems to form a story of itself. The narrative is strange–unlike anything I’ve written before. The library takes on a consciousness of its own, watchful, patient, dangerous. The scream becomes a motif, an echo of each character’s silent cry for connection and friendship, for help.

Outside of Freddie’s head, Freud Girl is actually Marigold, a heavily tattooed psychology grad student who seems to be developing a crush on Heroic Chin, or Whit as he’s more commonly known. Whit is doing his best to flunk out of Harvard Law so that he won’t have to follow in his parents’ footsteps and join their law firm. Finally, Handsome Man is Cain, who is also a writer researching his next novel, depicting the life and death of a homeless man surviving on the cold Boston streets. As the foursome begin to build stronger relationships based on their initial rapport, they’re each excited to have found genuine new friends. Trouble is, one of them is a murderer.

As the story builds, we’re made aware that Freddie’s tale is actually a fiction created by the renowned Australian author Hannah Tigone. Further, while Hannah is stuck in pandemic lockdown in Australia, she’s in direct correspondence with a Bostonian fan, Leo, who’s more than happy to help research her setting. Leo starts out friendly, if a little pushy, often offering unsolicited advice as he reads each of the chapters Hannah sends. Some of this advice is actually quite canny, as when he’s talking with Hannah about race or about COVID-19 :

I notice that you have not once in this novel made any reference to the global pandemic. I understand of course. We’re all sick of it and all it entails. But I think it is the responsibility of writers to bear witness to the darkness as well as the light. Without any mention of the virus, your novel risks being dated before it’s released.

You could of course be setting this novel in the future, at a time when all this is behind us. But if you don’t mind me saying so, that’s exceedingly optimistic. I suspect that a world without disease will need to feature flying cars and victims dispatched by laser guns. Writing a contemporary novel without the pandemic is surely more fantasy than mystery.

As Freddie’s story grows more and more complicated, so too does Hannah and Leo’s. The cat and mouse games between the various characters lead to several thrilling surprises, and a tense, satisfying ending for Hannah and Leo’s story. I was a little less clear on what was signified by the end of Freddie’s tale, though I did think that the whodunnit overall was successfully executed.

Overall, I found the book to be a wonderfully nimble play on the relationships between writer and reader, and writer and muse. While Ms. Gentill is perhaps best known for her terrific Rowland Sinclair historical mystery series, this standalone novel is an excellent addition to her canon, tackling complex literary issues with both wit and panache.