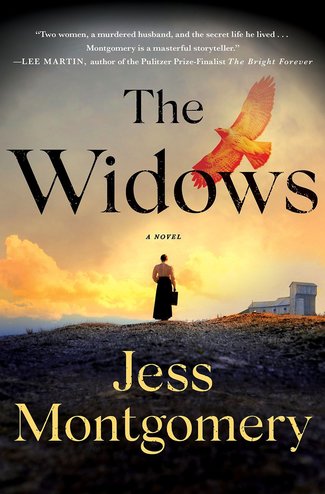 Inspired by the true story of Ohio’s first female sheriff, The Widows by Jess Montgomery is a powerful debut about two women’s search for justice as they take on the corruption at the heart of their community.

The characters in Jess Montgomery’s debut novel, The Widows, wait for signs. The cry of a hawk wheeling in the Kinship, Ohio sky, the ominous hoot of an owl in darkness—these omens and others guide Montgomery’s characters. It’s no wonder; in the hardscrabble mining town of the 1920s, there was little that the workers and their families could control. Sudden cave-ins, the capricious whims of cruel mining companies, or an outbreak of disease could upend everything. A warning, however obscure, could mean the difference between life and death.

But for Montgomery’s protagonists, Lily Ross and Marvena Whitcomb, there are no warnings that can prepare them for widowhood. Lily’s husband, Daniel, is the sheriff for Kinship and the adjacent mining town Rossville, where his brother Luther runs the mine. As the book opens, Daniel is killed during what should have been a routine prisoner transport. Town officials appoint Lily the acting sheriff—a purely ceremonial position, they believe.

But unwilling to drown in grief, Lily sets about solving the mystery of her husband’s death. She’s joined by Marvena, whose husband died in a mine collapse a year earlier and whose daughter, Eula, has disappeared. Like Lily, Marvena is carrying on her husband’s legacy and is Rossville’s lead union organizer. But Marvena has a past with Daniel, and as the two women grow closer, they must contend with the legacy of a man who kept secrets from both of them.

There are plenty of secrets in The Widows, and Montgomery creates a layered, rich mystery that makes the most of its historical setting. Her prose is captivating and sharp, in tune both with the natural landscape and the human corruption that haunts the mountains. It’s a world in which things are equally dangerous and beautiful, where the landscape itself is a warning and an invitation.

All she can think of is Daddy and how he, along with Marvena’s husband and several other men, had not been pulled out. There was a marker for Daddy at Kinship Cemetery but nothing to bury. She wonders if Marvena has a marker somewhere for her husband or if he’s memorialized only in memory.

Her only moment of rest is in this moment, staring at the top of the hill, bashed in like a skull, its crown of thorny headstones destroyed. It is as Jolene feared. A child had foreseen it.

The Widows is deeply researched, and Montgomery’s writing carries with it the confidence of truth. Little details about the clashes between miners and bosses in the late 19th and early 20th Century, how mines operate, and the daily domestic rhythms of 1925 Ohio give the narrative some additional heft.

Read an Excerpt of The Widows Now!

But even without that research, the book would be a thrill to read. As Lily and Marvena dig deeper into Daniel’s murder and Eula’s disappearance, they dredge up their community’s darkest secrets. This is Appalachian noir, as bracing as a shot of Marvena’s famous moonshine, and Montgomery sets this seedy world in sharp contrast with the region’s natural landscape. Pinkerton thugs and mob enforcers stalk the two protagonists, and the specter of a bloody battle between the beleaguered miners and Luther’s minions haunts the book. No one is to be trusted—friends and family can be bought off easily, and the law, from the lowliest cop to the highest court, is always on the mine owner’s side.

That is, except for Lily. Montgomery’s created a great protagonist here—Lily is tough, a crack shot, and a determined investigator. She’s also compassionate and brave. Lily wouldn’t be out of place stalking city streets with other noir heroes, but she’s her own person and doesn’t settle for living in her husband’s shadow.

“The prisoner’s name. I want his name.”

“But wouldn’t Luther know? Since the prisoner was a miner?”

“Not likely. Luther’s men handle the miners who get out of line. Lily, let it be. Martin, Luther’s men, others—they’ll find him. If he’s to be found.”

This new notion, Daniel’s killer going free, twists Lily’s stomach. It is so easy to disappear in these hills.

One of the book’s best sequences finds Lily rushing into a mine collapse to save a young boy. Here, Montgomery’s skills are on full display—the pacing is tight and the details are so strong that it’s impossible not to feel as if you’re stuck in the cave with water rising around you.

The Widows is a fantastic debut. Montgomery’s created a protagonist who readers will eagerly follow through future installments of the series, and a historical mystery that’s both fully realized with period detail but also surprisingly contemporary in its themes. It’s a good sign of things to come from this author.