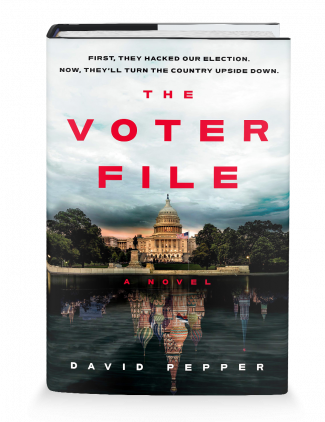 In the latest political thriller from David Pepper, rogue reporter Jack Sharpe is back and investigates election meddling of epic proportions.

Remember when national politics used to be about issues, and good people of all ideologies could come together to triumphantly uphold the ethical principles America was founded upon? David Pepper’s page-turning latest thriller The Voter File hearkens back to those days, positing an alternate reality where a female Democratic president was elected after twelve years of Republican control but still faces pushback by vested interests against her anti-monopolistic economic agenda.

That’s the backdrop for the third installment of the Jack Sharpe series, with the veteran reporter coming to terms with his recent acrimonious parting of ways from the Republic News channel. Now considered untouchable by most of the larger media outlets, Jack is on the hunt for the next big story to get his career back on track, as well as to pay the bills. Towards this end, he’s finally gotten in touch with a young woman named Tori Justice, whose claims she can upend the entire political system as we know it.

Tori is a graduate student who served as a volunteer for a recent successful judicial election campaign. She was put in charge of entering data into their voter file: a database of local voters linking back to the national party’s resources that helps to establish the likelihood of any given voter choosing their candidate in the upcoming election. Campaign efforts could thus be spent on reminding and aiding likely voters to get to the polls, a practice enthusiastically embraced by Democrats and Republicans alike.

As such, she was uniquely positioned to notice that, by all indicators, her candidate should have lost. Her concerns were shrugged off by everyone she brought them to until Jack finally paid attention to her story. But hacking voter files seems like such a subtle piece of manipulation that would only really work in local elections, and to what end? Tori and Jack have some ideas:

“So it may be easier to steal statehouse seats than any other positions,” she said, sitting up straight. “But that again begs the question: What do you get out of statehouses that’s so important nationally?” Her question took me back to Columbus, Ohio, the state capital that I knew best, both as a reporter and as a son. Even when Dad had served there, the sausage making wasn’t pretty. But it was worse now than ever. Gerrymandering had long ago meant that few of the pols walking the halls of the statehouse had had to win a general election to get there; they’d simply emerged successfully from their primary. And all they had to do to stay in office was stave off any challenge in their next primary. Then came term limits. As popular as they were, they’d changed the place, and not for the better. With politicians cycling in and out of Columbus rapidly, lobbyists now ran the place.

As Jack and Tori dig deeper, they discover that the conspiracy is further reaching than they thought, involving international cartels and a certain Russian oligarch Jack thought he’d never have to deal with again. With the help of Jack’s former colleague at Republic News, the resourceful Cassie Knowles, they’ll figure out the whos and whys…but at what cost? With hitmen leaving a trail of dead bodies behind them, Jack and Tori will have to go on the run in order to bring the truth to light.

Meanwhile, the woman at the center of the conspiracy, the mysterious Katrina, will be doing her best to outwit our heroes. She has a pretty good head start, if a decidedly jaundiced view of our political processes, as she discusses with a subordinate what our heroes might have already seen when they pulled their original campaign’s suspect voter file:

To achieve the desired outcome in Wisconsin and elsewhere, [Katrina and her team] had to actively manipulate the losing campaign’s data. While accessing and understanding the winning campaign’s data was important, nothing needed to be altered.

“Yes. There should be no discrepancies from anything they’ve seen before.”

Katrina sat back down and eyed her screen. “You’re right: no exports. So all they will see is that their tactics and targeting proved highly effective, correct?”

“Exactly. We can only hope they don’t talk to their opponents.”

Katrina smirked while standing up again. “This is American politics. That won’t happen.”

Unlike Katrina, Mr. Pepper has a greater faith in both the American people and in America’s systems to do the right thing to make sure that justice, insofar as it can be dealt given the realities of the process, is served. The Voter File is a wonderfully non-partisan look at the way things are supposed to work, regardless of criminal interference. Most of all, it’s an engaging page-turner that will both satisfy series fans as well as make new fans out of readers, like myself, who are just now discovering these terrific books.