March 4, 2022
The Verifiers by Jane Pek introduces Claudia Lin, a sharp-witted amateur sleuth for the 21st century, who works for a dating detective agency in New York City. Check out Doreen Sheridan's review below! 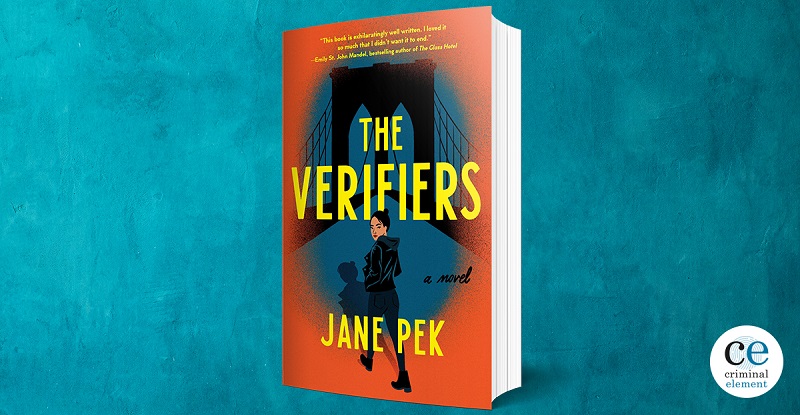 Claudia Lin was more than happy to leave the stodgy world of corporate finance behind her in order to work at Veracity, a firm that seeks to help the lovelorn verify whether the potential matches they’re talking to online are actually who they say they are. Obsessed with mystery novels since she was a child, Claudia loves the investigative aspects of her new job, where she works in a small office under the supervision of her bosses, Komla Atsina and Becks Rittel:

At my verifier interview, when Komla explained what Veracity did and I said, with maybe a tad too much enthusiasm, “Like a detective agency?”, he looked vaguely perturbed[.] A detective agency might seem like an obvious parallel, he said, but he tried to dissuade clients from viewing Veracity as such. The verifiers didn’t solve crimes, and they didn’t intervene in the course of events beyond reporting their findings to their clients. Think of us, said Komla, as a personal investments advisory firm.

A month into the job, it’s obvious to me that all our clients think of us as a detective agency.

One of their latest clients is Iris Lettriste, who presents two interesting conundrums for Veracity to look into. The first is a man who goes by the handle Charretter, who seems enthusiastic about chatting online but demurs every time Iris suggests meeting in person. The second is a Captain Bubbles, whom Iris actually has met in person. However, she thinks he’s hiding something significant from her and wants Veracity to find out what.

Since Claudia is the company’s newest employee, she’s given most of the tedious legwork to do in what seem to be fairly straightforward cases. She’s also the person responsible for trawling through all the in-app conversations between Iris and her matches, as Veracity has behind-the-scenes access to a significant number of the most popular matchmaking apps on the market. Her investigations come to a screeching halt, however, when Iris not only turns up dead but turns out not to be who she claimed she was at all.

Komla and Becks are ready to write off Iris’s bill as a loss before promptly forgetting about her, but Claudia feels that there’s much more to this story. The more she investigates, the more she learns about what her bosses are hiding from her. Will she jeopardize the job she loves in order to get to the truth? And will she find herself risking more than just her job in her pursuit of justice for Iris?

The Verifiers is a really terrific debut novel that melds a borderline techno thriller mystery with a contemporary comedy of manners. The depiction of Claudia’s own complicated personal life, balancing her typical 20-something-year-old situation as a 21st-century American woman living in New York City with the more unusual pressures she faces as the youngest daughter in a Taiwanese immigrant family, make for really absorbing—and to me, relatable—reading. Claudia is smart, funny, self-aware, and loves a good mystery as much as I do, constantly referencing the (fictional) Inspector Yuan series as she investigates:

Right then it comes to me that I’m in the information-asymmetry scene in every Inspector Yuan novel where one out-of-the-loop character keeps asking questions so everyone else can reveal important information in a vaguely naturalistic way. And, goddamnit, that character is me! My curiosity and my pride tussle for a few seconds. Curiosity ends up on top, as it usually does.

I really hope this is only the first in a line of mystery novels featuring Claudia and crew. While I did find both her mother and her sister insufferable, I understood Claudia’s sympathy for them, and love the empathy she shows throughout this book. It was really nice to see how empathy is shown as an invaluable trait in detecting, as Claudia uses it not only to sort through various suspects’ motivations but also to get closer to the truth, whether it be through interviewing witnesses or piecing together clues. Claudia is such a great, fresh detective protagonist, and I’m very eager to read more of her ongoing adventures.