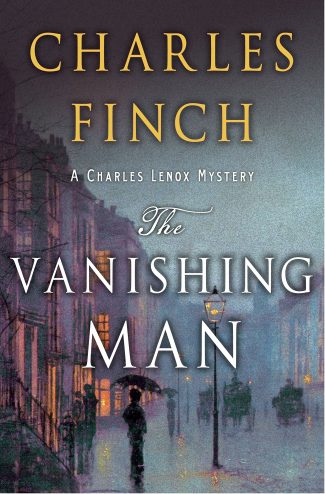 Charles Finch’s The Vanishing Man is a prequel to his Charles Lenox Victorian series in which the theft of an antique painting sends Detective Lenox on a hunt for a criminal mastermind.

…His eyes returned to the much smaller, smoky painting. Number five.

It was in a wood frame, not gilt like the others, and its sitter wore a plain dark shirt, open at the neck. He had a small gold earring, in the fashion of the 1810s. But the painting looked a bit older than that to Lenox’s (deeply untrained) eye. He held a delicate flower by its stem, though his gaze was directed at the viewer.

There was an intelligent watchfulness to him. In the empty space next to him on the canvas were a few lines of cursive writing, as you sometimes saw in old French pictures of Christ or his mother.

“Who is this, then?” Lenox asked nodding toward the painting.

Dorset smiled, at last. “There you ask to know something that Ward does not know—that, if I am not mistaken, three people on earth know. I suppose you think I may rely upon you to be the fourth.”

“I will certainly keep it a secret, Your Grace.”

“Very well,” Dorset said. “That is the only existing oil painting from life of the writer William Shakespeare.”

Fitting, since a portrait of the Bard is at the center of the tangle.

The Duke of Dorset, the third most powerful figure in England, reluctantly turns to Lenox when a painting of his great-grandfather, the 13th Duke, goes missing. The confounding thing is that the stolen picture is essentially worthless, and Dorset is convinced that the thief intended to steal the priceless Shakespeare his family has kept hidden and secret for generations.

Hidden for very good reason, because family lore has it that the painting contains a clue that will lead a clever man to one of the Bard’s lost plays. Unfortunately, the Dorsets have never been able to solve the riddle.

At twenty-six, in London for barely eighteen months, the private investigator still has a lot to learn. He spends his Saturdays at Bedlam interviewing the inmates to understand the insane and criminal mind. His mornings are devoted to pouring over papers with valet/right-hand-man Graham clipping out useful stories for his files. He’s still reeling from the recent loss of his father, but his friendship with neighbor and childhood companion Lady Jane Grey is a constant source of comfort.

And Lenox is perplexed by the details of the Dorset case. Given the obvious differences between the Shakespeare portrait and the other paintings in the Duke’s study, how could the thief have made such a stupid mistake? Did he really escape via the opened window—or was that just a smokescreen?

Then there’s a kidnapping; a shooting; a conveniently sickly heir; a spinster daughter; a distant wife; a missing maid; a mysterious Bedlamite. Is money the motive, or revenge, or fame? Is the culprit driven by a mania for Britain’s greatest playwright, or is there something more personal at work here?

At times like this he felt a sort of nausea of confusion, the feeling a doctor must have when a diagnosis lies just beyond his grasp, a writer when the plot won’t come together.

It inclined him to despair, on such an unforgivingly hot night. He was twenty-six—how soon hath time, that winged thief!—and had achieved nothing. The police despised him, and any man or woman of his own class might dismiss him without a thought for this odd folly of his profession.

“Yes?” Lenox replied, looking up after a beat out of the oceanic lethargy of his thoughts.

“I’m going to fetch a glass of water from the kitchen, if you’d like one.”

“Oh. Why, all right. Thank you, Graham.” He mustn’t give in to melancholy. “I would eat some of that cold plum pudding if it happened to be in the larder, too.”

The Vanishing Man, in true Lenox fashion, has a nice balance of mystery, history, and humorous charm. While certain stakes are sky high—this is Shakespeare we’re talking about, a man who was already mythic even in 1853—they never become too personal or dangerous for our hero. This is a tale that strolls at a comfortable pace, giving us a nice view of the scenery and colorful characters, without stressing our nerves or heart overmuch.

That isn’t to say that The Vanishing Man isn’t substantive. Charles Finch fills the space between plot-pertinent clues with plenty of intriguing etymology and history, bringing Victorian England to life in that pleasant, conversational way we’ve come to know and love.

The supporting cast is as fine as ever: standouts include the enigmatic Bonden—an ex-naval man with an almost supernatural gift for locating missing items and disappearing into the scenery—and Lenox’s twelve-year-old cousin, the ironically named Lancelot, who’s staying with the detective and wreaking havoc with his peashooter and precocity.

Lenox was just going to cross the hall to intervene when Lancelot said, in a tone that was more anthropological than anything—scientific—“You’ve got a perfectly enormous mouth.”

The duke looked startled. “Excuse me?”

“You’ve got a huge mouth!” Lancelot bellowed. Then he added, with sympathy, “My great-grandfather is deaf, too.”

The duke reddened to the roots of his hair. “I’m not deaf. I’m fifty-seven.”

“Have you seen how many grapes you could put in there?”

“Of course I haven’t,” he said. Dorset’s hand went involuntarily to his mouth. “It’s a normal-sized mouth.”

“Are you that duke?”

“I am the Fifteenth Duke of—”

“I bet you could get ten grapes in there without any problem at all. After that it would be tricky.”

“It’s a once-in-a-lifetime opportunity. We’d simply be throwing it away not to try,” said Lancelot. “Shall I ring and ask for some grapes?”

The duke, who had existed for many years without the encumbrance of a living soul disobeying his wishes, looked wholly bewildered.

It may be a prequel, and we see plenty of familiar faces, but The Vanishing Man still adds new depth and layers to Lenox and his world, making it a must-read for old fans. At the same time, it’s fresh enough to be a great launching point for any newcomers to the series.

Finch’s light touch makes for a compelling if leisurely read, a nice palate cleanser if you’re coming off something dark and heavy—and the perfect antidote to a grey and chilly February.

Listen to an audiobook excerpt below: