March 30, 2022
The temps at Delphi Enterprises are underemployed, underpaid, and now trying to survive the apocalypse while trapped inside an office complex. Don't miss Andrew DeYoung's thoughtful exploration of legacy and survival in The Temps. 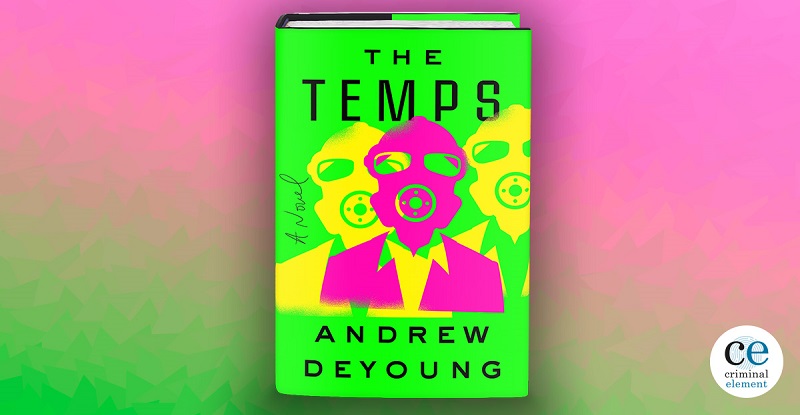 Delphi Enterprises is the kind of conglomerate so sprawling that no one can really say what it does, besides make money for its founder and owner, the mysterious Tristan Brandt. Headquartered in a vast complex of buildings, it’s the kind of place that constantly hires temps, such as the four main protagonists of this novel, to help supplement its large and varied workforce.

Readers are first introduced to Delphi by Jacob, an overeducated and under-employed 25-year-old, whose intellectual dominance in college did not translate well to the post-graduate world:

Jacob once felt that he was destined for some kind of greatness, had dreamed of fame as a writer or intellectual of some sort, but the past three years had taken their toll. Now, the thing he craved most was the same thing he’d once disdained: a white-collar job as a cog in the corporatist/ capitalist machine, with a salary, health benefits, and a 401k. And so, when notification of the temp listing—a job in an office, requiring no skills or experience—had buzzed on his smartphone, he applied for it at once. It may have been beneath him, may have been at a company whose business he didn’t even understand (the website said something about research, and intelligence, and analytics), but it was at least adjacent to the kind of life he wanted: not quite fame and fortune, but not another unpaid internship or fast-food job, either.

On his very first day in Delphi’s mailroom, he’s given a ground-floor route by his harried supervisor, who then hurries off herself to attend a mandatory meeting of all Delphi’s permanent employees in the complex’s outdoor amphitheater. Jacob is a little spooked at how empty the place seems with only a handful of temps left indoors as he delivers mail from cubicle to cubicle, but that’s nothing to what he feels when he decides to linger by a window with a view of the amphitheater to spy on what he’s missing. As Brandt himself takes the stage to thunderous applause, a strange yellow mist suddenly descends, turning all the exposed employees into wild-eyed killing machines, before drifting off, presumably to infect other innocent people with the same murderous rage.

Emotionally shaken but physically safe inside the climate-controlled complex’s walls, Jacob collects a handful of other temps as they try to make sense of what’s happening in the world outside their air-filtered buildings. Lauren is a former classics major who now writes breezy online psychological pop quizzes. Swati is a yoga teacher with anarchist connections. And ambitious Dominic is the one most ready to adapt to a scarcity mindset…at least until the foursome realize that they aren’t the only people left in Delphi.

As the foursome navigate the seeming end of the world, they have to contend not only with clashing personalities amongst the survivors but also clashing visions of what kind of future is worth constructing from the rubble. Some of the other survivors aren’t even convinced that an apocalyptic event has actually happened, but are willing to tough it out in order to prove (presumably to a secretly watching Brandt) that they’re worthy of being raised up by him to some sort of inner circle, with an island paradise being only one of their rewards. Swati scoffs at this weird deification of a presumably dead tycoon, even as she acknowledges how typically human a reaction it is:

“Oh, come on. Isn’t this basically what people have been doing for hundreds of years, with religion? Some absent, all-seeing god is watching— and if you do certain things, do them exactly the right way, that god will rescue you, bring you into paradise.”

Sort of like that? Swati thought it was exactly like that. That there were no supervisors, no company to work for, transformed the temps’ pointless typing, emailing, and copying into ritual. The language they used— remembered phrases like “I’ll have that to you by end of day” or “Let’s take that question offline” or “It seems like we’re having some version control issues”—now seemed like incantations, wards against death and despair.

Andrew DeYoung has written a fascinating and entirely believable allegory for how modern capitalist societies might cope with the end of the world. The novel uses anthropological touchstones to explore 21st century humanity’s relationships with society-building and the meaning of the common good. Our four main characters are each vastly different people, but are all believably flawed human beings doing the best they can in the face of catastrophe. As much as I found Jacob’s woe-is-me personality irritating, I absolutely empathized with his compulsion to investigate further, to find out why he and his fellow temps were left unscathed by external events, as well as to unearth the extent of Delphi’s involvement in what happened and what could happen next.

The mystery at the heart of this novel lays the groundwork for a really thoughtful meditation on legacy and survival, compromise and integrity. As with all the best speculative fiction, it makes the reader think long and hard about the future we want to build, and our own moral obligations towards fulfilling that vision.