Book Review: The Stranger in the Mirror by Liv Constantine

July 19, 2021
From Liv Constantine comes The Stranger in the Mirror: A diabolically twisty, psychologically unsettling novel about a woman with no recollection of her past. 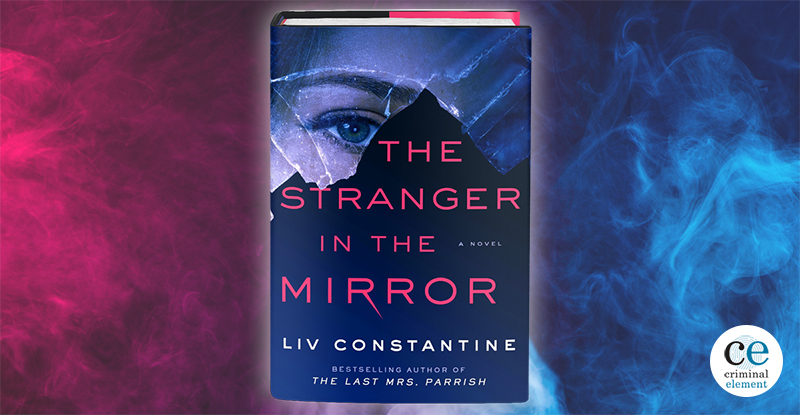 Addison Hope is planning a wedding and launching a photography career—all without knowing who she was two years ago. She was discovered walking along the highway when a kind truck driver, Ed, offered her a lift. Realizing she didn’t know who she was, where she came from, or what happened to her, Ed and his wife, Gigi, try to help her establish a new life.

She meets her fiancé, Gabriel, at work. He falls in love with both Addison and her artwork. Together they navigate Gabriel’s pushy mother, Blythe, who doesn’t 100% believe Addison’s story. Blythe hires a private investigator to dig into Addison’s past. But digging into a non-existent past is harder than it looks. Addison has no recorded fingerprints, no DNA on file, and no history beyond flashes of a violent night.

However, who should walk in when Addison’s new photography exhibit goes on display…but Addison’s real husband, who had been looking high and low for her.

The Stranger in the Mirror is the newest suspense-filled novel from Liv Constantine, the pen name of dynamic duo Lynne and Valerie Constantine. Throughout this novel, the reader—and Addison—must always ask the question: What is true? Addison is a character who knows nothing about herself. Therefore, she, and we, must trust the information provided by the people who care about her. (Or the people who are nosy enough to dig into her.)

Addison remembers skillsets easy enough. She knows how to write, how to read, how to drive, and how to take photographs. It’s her personal information that appears to have vanished. This could be a trauma response, evidenced by the small flashes of a violent confrontation she gets from time to time. But she also wonders if she is the one who caused the violence?

This self-doubt leads her to question whether she should pursue a life with Gabriel, her fiancé. Gabriel is the kind of understanding, amazing man every woman wishes she could find. He’s handsome, rich, and genuinely seems to care about Addison. When she melts down, he’s there to pick her up. When she doubts herself, he’s there to offer support and a friendly ear. Because of his many, many admirable traits, Addison has fallen in love with him and believes she can make a go of it with him. In spite of everything.

But her niggling doubts rush to the forefront on the night of her exhibition. With her art on display and her new friends and family surrounding her, in walks Julian, a man who calls her “Cassandra” and claims to be her husband. He shows her photographs.

I lean against the wall as I try to make sense of what I’m seeing. It is me, that much is obvious, but I don’t recognize the man or the child with me. Husband. The word reverberates in my mind. I try and connect to it, but there’s nothing. I look up at him, trying to place his face. He is looks are the opposite of Gabriel’s. Thick blond hair, crystal-blue eyes, and a strong jawline. He’s handsome, almost too handsome. He looks like he might be in his late thirties or early forties, tall and slender and elegantly dressed. I glance at his hand and see the gold wedding band on his finger. Why can’t I remember him?

I look down at the phone again, my heart beating so loud I’m sure everyone can hear it. I stop scrolling when I get to a photo of a little girl. She’s beautiful. Long dark hair, alabaster skin, and emerald-green eyes. Eyes like mine. The memory of the little girl crying comes crashing back to me. I want Ellie. Was it her I was remembering?

I turn to the stranger who says he’s my husband. “Is this…is she…”

He smiles at me. “That’s Valentina. Our daughter. Do you remember her?”

He doesn’t understand how she could forget their daughter, Valentina.

The crazy dynamics of this novel are wonderfully navigated. It could be easy to get lost in the mix of characters and their interlocked pasts. But Constantine walks us through the motivations and emotional triggers by creating distinctive characters and presenting necessary information in alternating POV chapters.

Through Addison, we see the flashes of her past. Through Julian, we see how he views his Cassandra. Through Blythe, we see the doubts and questions surrounding Addison from a more cynical, protective mother viewpoint.

And just when you think you’ve figured out the truth—you discover you’re wrong.

The Stranger in the Mirror is a great addition to your beach bag this summer. Liv Constantine has done it again—creating multi-dimensional characters with some very deep psychological issues. Highly recommended for readers who enjoy twists and turns.