September 3, 2021
A secret staircase. A long-dead body. A present-day murder. As Kate Hamilton attempts to renovate a historic house, she realizes that real dangers lie in digging up the past. Read a review of The Secret Staircase by Sheila Connolly! 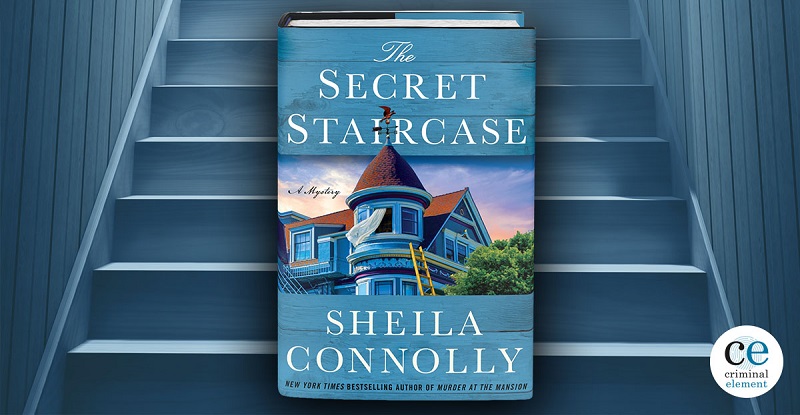 Sheila Connolly’s third Victorian Village mystery, set in the fictional town of Asheboro, Maryland, straddles a fine line between the past and the present. The town fathers and mothers asked Kate Hamilton to come home to save Asheboro from bankruptcy. She has made a worthy start in achieving her lofty goal to return Asheboro to the Victorian village it once was. To understand Kate’s mission, consider Old Sturbridge Village in Massachusetts, “an 1830s New England Living History Museum.” Kate’s newest project is the restoration of the stately Barton Mansion, once the home of Henry Barton. Other than the kitchen, the mansion is in pretty good shape. To succeed, Kate must ensure she has generous long-term funding for her re-creations, which translates into wine and dine her donors.

It was a perfectly preserved Victorian kitchen, but what would it really take to make it work? Could the antique spirit be preserved if all the pieces actually had to function? Would it be worth the expense, or should I just find a good caterer and let them bring everything in themselves? I realized that caterers would still need an electrical supply for some elements of their work, and running water was a basic sanitation concern. And then, if there was a bar—which would certainly facilitate the writing of generous checks—there would have to be ice, and a way to keep wine cold . . .

It seems her decision has been made. Kate needs a competent contractor who will respect the integrity of a pristine Victorian kitchen. Unexpectedly, the contractor Kate hopes to hire discovers a secret staircase in the kitchen—and inside the staircase is a body. This is not the smooth kick-off to construction Kate needs. Due to earlier encounters with dead bodies (Murder at the Mansion and Killer at the Carriage House), Kate knows local Detective Brady Reynolds rather too well. She shares her theories with Reynolds—might the man have died in a fall?

“But then somebody walled him in. I’m guessing the kitchen was remodeled about 1880, based on the utilities, so if he got walled in, he had to have died around then. And that is the sum and total of what I know.”

“I can’t speculate on the circumstances without examining the scene. Who did you say was with you there?”

“Morgan Wheeler, the contractor.” I realized I hadn’t actually offered Morgan the job, and we had barely talked about it, before this interruption. I’d need some time to think, which was in short supply at this moment. “A potential contractor, I mean. I interviewed two others today, but they didn’t comment on the state of the wall. So . . . now what?”

“It’s an unexplained death, so we have to investigate. We’ll try to identify the man. That might not easy, if the body’s from the Victorian era.”

Kate reassures Brady that it’s not Henry Barton, who didn’t die until 1911. The police autopsy results show that the man was murdered and that he died around the time of the 1880 kitchen renovation. That puts a damper on Kate’s project.

A conversation with Frances Carter, the doyenne of the Asheboro Gazette, gives Kate a perspective on the town that she had been lacking. When Kate tells Frances she’s looking for Morgan Wheeler to lead the kitchen renovation, Frances says she thinks she knows him.

“You might think so, dear. But keep in mind, young people of your generation and a bit older have been moving away from this area in droves, finding work elsewhere, never coming back. But before that? Folks stayed put.”

Not only did folks stay put, but “memories are long in quiet places—old loves, old feuds, they tend to get handed down through generations.” How disquieting, thinks Kate, but she moves on to asking questions about Henry Barton and his wife Mary.

Morgan Wheeler assembles an experienced local crew to do the renovation but there’s tension. Plumber Steve Abernathy, a man with a “lizard smile,” rubs Kate the wrong way from the get-go. Steve is abrasive with Morgan and electrician Bethany Wallace tells Kate that Steve is in her space, making her feel uncomfortable, even stalked. Kate worries Steve will venture into parts of the mansion that are not in his purview: does she need to lock down the silver? She calls him on it early one morning when she runs into him in the kitchen.

“Steve, what are you doing here? And how did you get in?” I reminded myself to talk with Morgan about access for the workers; I had given him a set of keys for when we started work, but I didn’t want people just wandering in at will.

Steve snorted. “I grew up around here—I know the back ways. Could be you know them too, if you went to school in town.” His face formed a smile that was part snarl. Was he trying to mock me? And what did he mean exactly?

After Steve turns up dead in the kitchen basement—murdered according to the police—Kate wonders if the present-day difficulties in the contracting crew have a long tail—one going back generations. Is she putting herself and others in danger by digging up the past?

The Secret Staircase will appeal to fans of the venerable This Old House show and the newest HGTV sensation Cheap Old Houses. Enjoy all the magic of historic renovation with none of the dust and bills.

There’s an elegiac tone to The Secret Staircase, a recognition that the past has its ways of impacting the present. Sadly, Sheila Connolly passed away in the spring of 2020. May her memory be eternal and her books be treasured.