Book Review: The Secret in the Wall by Ann Parker

February 14, 2022
In the eighth Silver Rush mystery from Ann Parker, Inez Stannert's investigative skills are put to the test when a skeleton tumbles out of the wall of her latest business investment... 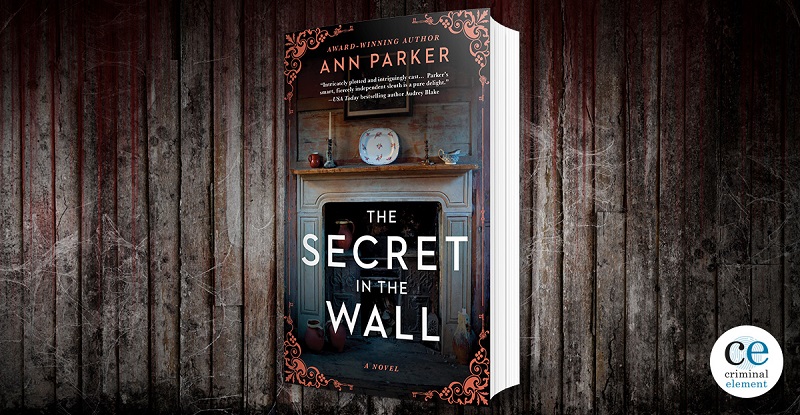 Inez Stannert has fully established herself in her San Francisco music store. However, these days her thoughts are more often on her side venture of giving small loans to local businesswomen. Her latest investment has been in Moira Krause, the hardworking if superstitious boarding house owner who wants to expand to the empty property with which her establishment shares a wall. Determined and ambitious but also kind, Moira is exactly the kind of person Inez wants to help succeed.

Their business relationship is further strengthened by the fact that they’re both the sole caretakers for young girls of similar ages; Moira’s daughter Charlotte and Inez’s ward Antonia. The girls’ fast friendship entails not only helping each other with their schoolwork but also whispering about stories of pirates and adventure. Antonia, especially, longs for a far more interesting life than the one she currently leads as a respectable young girl in late 20th century America:

Since she’d started reading Treasure Island, she couldn’t stop thinking what it’d be like to find a secret treasure map, hop aboard a ship like the Hispaniola, and sail off to an island where she could fight the bad pirates, befriend the good pirates, and uncover a chest with doubloons or pieces of eight.

To Antonia’s great delight, what should be the happy if somewhat staid occasion of celebrating the purchase of the Krause’s neighboring property, is enlivened by the discovery of a skeleton in the wall they’re tearing down in order to connect the buildings. Even more intriguingly, the skeleton is clutching a bag filled with gold. This thoroughly captures the young girls’ imaginations, leading them to perhaps more adventure than they ever bargained for.

Moira and Inez are certainly not as thrilled as their children are by any of these developments. The caretaker of the property was already being difficult about handing over the keys and now wants to take legal action to rescind the sale altogether after this discovery. Inez is determined not to lose her investment, so she begins to investigate in order to find out who the dead person could have been and what they were doing with such a substantial sum of money. But when a fresh corpse is found outside the property, she’ll have to consider whether the dead man’s secrets are worth risking not only her life but her beloved Antonia’s.

Inez’s devotion to the young girl she’s raising as her own is one of her best qualities, even if, as with other parents of the time, she isn’t the most demonstrative. Though she wants to comfort a troubled Antonia, she allows her ward to cut short an important conversation:

“I gotta go or I’m gonna be late for school.”

“Well, we can’t have that, can we?” She wanted to give the girl a hug, tell her that all would soon return to normal. That she would protect and care for Antonia with every fiber of her being. That she would always be there for her. Instead, she smoothed and straightened Antonia’s collar with a gentle hand before moving aside and opening the door. “I’ll see you after school,” she repeated and watched Antonia clatter down the stairs and out the street-level door.

This engaging mystery has readers traveling through 1880s San Francisco with Inez and Antonia, from Chinatown to Alcatraz and Russian Hill, as our heroines individually and together seek to get to the bottom of the mystery of the long-dead skeleton and his much more recent counterpart in death. Incorporating actual historical events with the fictional proceedings makes for a thoroughly engrossing, believable novel with a unique villain and relatable leads. Though this was the eighth book in the series, I had no trouble whatsoever familiarizing myself with the cast and their stories as someone brand new to these books. This is a great jumping-on-point for a historical mystery series with strong female leads that promises more intrigue to come in the future!