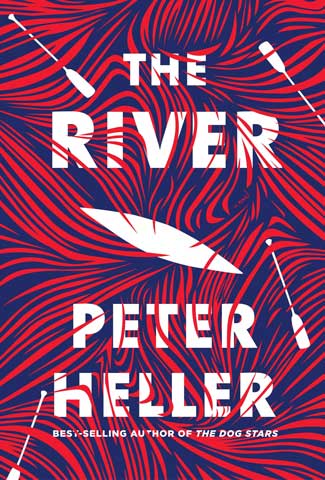 The River by Peter Heller is the story of two college students on a wilderness canoe trip and a gripping tale of a friendship tested by fire, white water, and violence.

If you haven’t yet read a book by Peter Heller, you’re in for a treat. The River clocks in at only about 250 pages, but it packs quite a punch. Jack and Wynn have been best friends since their college days at Dartmouth, sharing a love of books and the outdoors. Jack is compact and pragmatic. Wynn is a big guy with a big heart, always eager to see the good in everyone. They’ve taken countless canoeing and outdoor trips together, so a canoe journey down the Maskwa River in northern Canada seems just like heaven.

They had paddled many rivers together in the two years they’d known each other and climbed a lot of peaks. Sometimes one had more appetite for danger, sometimes the other. There was a delicate but strong balance of risk versus caution in their team thinking, with the roles often fluid, and it’s what made them such good partners.

And it is heaven, at least for a while. They have plenty of supplies, are both good fishermen, and the blueberries, which they both love, are plentiful. Now, though, Wynn and Jack have a big problem.

At first they thought it was the sun, but it was far too late for any lingering sunset and there were no cities in that direction for a thousand miles. In the farthest distance, over the trees, was an orange glow. It lay on the horizon like the light from banked embers and it fluttered barely so they wondered if it was their eyes and they knew it was a fire.

They’re not sure how fast the fire is moving, but they do know that it’s nothing to take lightly and decide to cut their trip short. Unfortunately, fate has a few other things in mind. On their third day, they hear voices coming from the shore. They couldn’t hear any words, but it sounded like a man and woman arguing. Frankly, though, it wasn’t any of their business.

The incident does contribute to a sense of unease felt by both Jack and Wynn after encountering two drunken men a way back that seemed less than friendly. Even so, they’re going to enjoy things while they can. After all, they’re on borrowed time. A fire is coming.

Not too long after, they decide to turn back and warn about the fire. But when they help a man in a canoe up on the shore, it’s immediately clear that something is wrong.

He was young, maybe midthirties. Mussed dark curly hair, a few days of beard, red-rimmed blue eyes, a stunned look, maybe panic or shock. The man did not thank them for the help in landing the boat. He did not speak. He looked from one to the other.

“Maia,” he said. It was a croak. “Mai—” Like it was hooked in. The word. Hooked in like a half-swallowed fly.

The man, Pierre, claims that his wife, Maia, went missing in the fog. It’s a dubious story, but at this point, Jack and Wynn have no reason not to believe him. He also has some sort of wound on his leg but claims it’s just a scratch. So Jack and Wynn do the exact thing you’d expect them to do—they offer to go back and look for Maia. What they find is horrifying.

A person crawled in the weeds. A woman on her right side, stretching and bunching like a broken caterpillar. She had lost blood. Her head was oozing over the left temple. Her face was a mask. The blood had dried and cracked. She crawled in the tall pink flowers and her rain jacket was open and her down vest was soaked in dried blood and covered in bits of dirt and moss. The blood was almost black and the fireweed blossoms trembled against it. Her eyes were half open and swollen and her mouth worked but uttered no sound. Wynn’s first thought was, Jesus, a bear. She surprised a bear in the fog.

They assess the damage, which is extensive, and help the woman as best they can. The only thing they can do is get her into their canoe (and by canoe, I mean 19-footer) and get her to medical help as quickly as possible. She’s not talking, so she can’t tell them what happened. Yet. But Jack suspects that Pierre most likely had something to do with it, and this suspicion shows itself when Wynn attempts to use a Walkie-Talkie to radio back to Pierre that they found her. Jack slaps it out of his hand, worrying that they just gave away the fact that Pierre’s murder attempt failed and that they know what he did.

Wynn, of course, doesn’t yet believe that Pierre hurt her (she could have fallen, a bear, etc.), but when they arrive at their previous camp, the tension—already high—climbs to a fever pitch. Pierre is gone, and their supplies are in ruins. Wynn throws out the bear theory again, but to Jack, the scene and the destruction of their supplies look like something staged by a person to look like a bear.

Jack’s instincts are eventually borne out, and now they must get Gaia to safety before Pierre can finish what he started. What follows is a generally unrelenting, sometimes unbearably tense race to outrun not only a killer but a vicious, fast-moving forest fire. This is the stuff of the very best thrillers, and Heller balances quite a few dynamics in the process—not the least of which is the friendship between Jack and Wynn and the unbalancing of it when Gaia and Pierre come into their lives. And then there’s that fire. There’s a memorable, visceral scene of animals fleeing the fire. It will give you chills.

I had to resist attempting to construct this almost entirely of quotes because it is such a ridiculously quotable book. The prose is gorgeous, and the author’s poetry chops show, especially in how he writes about the river and the natural world.

They both paddled on their knees to keep the center of gravity low. It was exhausting. Then the wind died all at once as if throttled and in less than half an hour the lake glassed off and they felt suspended in fog. They moved within a moving nimbus in which only a few yards of black water were visible in any direction, and the pale fog drifted in tatters like stubborn smoke. The water whispered along the hull and it had a silver sheen that reminded Wynn of rayon. All of it was dreamlike; he thought of a Poe novel he had read in which the castaways are pulled toward the South Pole and the current they are riding gets warmer and calmer as they go.

Heller writes with deep respect and empathy for not only nature and its inhabitants but also of human frailty, friendship, loyalty, and love. This exquisite book made me feel so many things—terror, sorrow, excitement—and isn’t that what it’s all about? Heller packs a ton of adventure and emotion in this short novel, and I dare you to put it down once you’ve picked it up.

Stunning, beautiful, life-affirming, and heartbreaking. What else can I say?