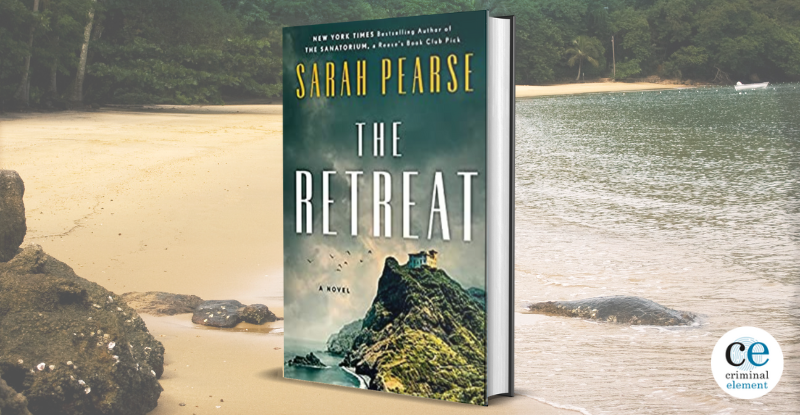 Detective Sergeant Elin Wagner is back on the force, ready and eager to do her job. Well, perhaps more eager than ready, as the newly reassigned Detective Constable Steed has been brought in to help and support her, particularly in cases reminiscent of the one that nearly forced her out of her job after a serial killer came close to adding her to his tally of victims.

But there shouldn’t be anything too traumatizing in the latest case she’s caught, out at an island retreat off the South Devon coast where she lives. Never mind that her fiance Will designed the resort, or that his sister Farrah is a manager there. A young woman, seemingly inebriated, has fallen off a cliffside. CCTV shows that it was likely accidental, but the more Elin investigates, the less sure she is that it wasn’t murder. There’s something about this island that feels deeply off, a feeling that’s affirmed for her by the resort employee who originally discovered the woman’s body:

‘Yes. The artist that did the piece in reception told me he went to the old school here, the one that burned down. Said he’d come to see his piece, check out the retreat,’ Michael continues. ‘Loved it, but he said…’ He pauses, his features frozen for a moment in thought. ‘He said he could still feel it,’ he says finally. ‘The evil here.’

Farrah shakes her head at his words, the melodramatic delivery, but as Elin thanks him, closing her notebook, she can’t dismiss what he’s said so easily. She, too, can feel it the longer she’s here–a presence and an energy that goes beyond all the stories.

Something intrinsic to the island itself.

Long before the resort was built, the island hosted a campsite that saw a string of gruesome murders. Before then, the premises were occupied by a school that became notorious for the abuse of its residential students. Now it seems someone is intent on continuing the island’s legacy of pain and sorrow. Could the young woman’s death somehow be a part of this, or is Elin just reading too much into an unfortunate accident?

As Elin investigates, she gets to know the victim’s traumatized family better. They had all come to the retreat in an effort at family bonding, though some were more enthusiastic about it than others. Hana, our other main viewpoint character, is definitely on the less enthused end:

Keep calm and carry on.

It’s all she needs to do. One week together and then they can go back to minimal contact. Now she’s an adult, she can decide how often she sees her sister, the kind of relationship they have.

It’s one of the few good things that came out of what happened. Hana had realized these past few months, after everyone had drifted away, left her alone in her grief, that if she can survive Liam’s death, then she can survive anything.

Hana just hasn’t been the same since the death of her beloved husband. While some members of her family think the trip will be a good distraction for her, others are more accepting of and patient with her grief. But as more and more of her party start dying, and a storm begins to bear down on the island, Hana must rouse herself to cooperate with Elin’s investigation while attempting to grapple with her own unresolved emotions in the face of so much new and unrelenting trauma.

The Retreat carries over many of the same themes as its predecessor in the series, The Sanatorium. There’s the remote location, a police detective with limited resources, and fractured family dynamics. Fans of the first book will be thrilled. I did enjoy seeing Elin grow as a person, and I really enjoyed how her relationships with Farrah and Steed developed over the course of this novel. I wish I could say the same for her relationship with Will, who is an awful fiance. It was nice to see Elin take steps to reclaiming her independence though, despite his disapproval. Hopefully, she’ll only keep growing stronger as the series progresses.