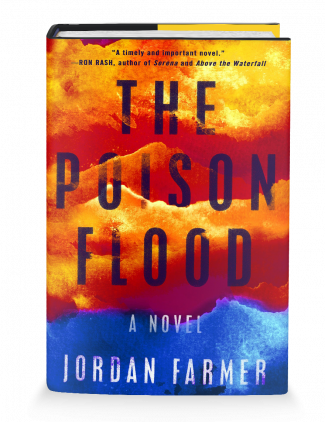 The Poison Flood by Jordan Farmer is the gritty story of a reclusive musician and the environmental disaster that threatens his small town and changes his life forever.

I’ve been fortunate in recent weeks to read and review several outstanding novels that place a spotlight on underrepresented communities in American fiction. To the examination of modern political chicanery in backwoods South Carolina of Steven Wright’s Coyotes Of Carthage, and the chronicle of hardships faced by Indian immigrants in early 20th century California in Rishi Reddi’s Passage West, can be added this moving tale of isolation and environmental disaster in remote West Virginia, The Poison Flood by native son Jordan Farmer.

Our hero is Hollis Bragg, the hunchbacked child of a hellfire-and-brimstone-spouting mountain preacher, who lives alone next to the burned down remnants of his deceased father’s church. Rumor in Coopersville County deems Hollis a near-mythical, monstrous figure, an image he’s happy to cultivate as it allows him to pursue his love for music in peace. Every once in a while though, a student braver than the rest will come asking for lessons. The latest of these is Caroline, the pretty junkie whom Hollis can barely believe deigns to share his bed in addition to spending time learning guitar from him.

Hollis, however, has a secret. He’s the uncredited writer for the hit songs performed by his childhood friend Angela Carver and her band The Troubadours. He’s behind on his work for her upcoming album, though, and finds himself increasingly distracted by music that he wants to keep for himself.

Enter Russell Watson, a local musician who’s somehow found out about Hollis’ history with Angela and proclaims himself a huge fan of their music. Russell also happens to be the scion of a local mining family whose investment in dangerous chemicals and negligent practices has stirred the ire of county residents and out-of-towner protestors alike. Eager to prove that he’s not his father’s son, he invites Hollis to watch his band perform live. Hollis agrees only because he’s afraid Russell will expose his secret otherwise. Little do either of them realize that events will quickly spiral out of control, beginning with a Watson Chemical plant spill that poisons the local water and culminating in a series of dead bodies that has Hollis on the run, wanting only to return to his isolation and his music.

While The Poison Flood is a thriller with short, sharp spikes of violence and a healthy dose of Appalachian grotesque, it’s also a poignant meditation on music, love, and belonging. Mr. Farmer writes so movingly on so many subjects in this book, but perhaps his most luminous prose comes from describing the one thing Hollis feels he can always rely on:

The guitar won’t fit my body while standing, so Caroline pulls a stool over from behind the counter. Once I’m seated, it happens the same as always, my fingers proving they are the only part of my body that hasn’t betrayed me. While the rest of my genes are hell-bent on destroying themselves, my hands feel noble grasping the rosewood neck. They slide up and down the frets independent of thought, instinctually aware of the right sound to create in the quiet. Music begins to provide, the way it always does, and for one blessed second, I’m not a hunchback playing in a pawnshop. There is no separation between my imperfect flesh and the sublime sounds emitted from the amplifier that crackles out the notes.

Music has always been Hollis’ solace and salvation, but it can’t shelter him from the reality of living in a place where tap water burns the skin. He does what he can to remedy the situation, but being poor and isolated and disabled doesn’t make him an idiot. He knows help isn’t coming, and he knows why:

There’s no sign of the Red Cross and FEMA representatives that should be crowding the street, either. I’m not surprised by the lack of assistance. In many ways, we’ve always been on our own, addressed only when the rest of the country requires our resources or needs something to mock. Relief isn’t coming, but that’s what most of these people voted for. An old-world version of self-reliance that cuts programs of aid, environmental regulations and other safeguards against days like today. Perhaps they did it out of feelings of desperation. You could argue that the poor don’t have the luxury of conservation, but I think those shortsighted notions have always been our weakness.

The Poison Flood is an even-handed look at the realities of life in rural Appalachia, especially for those who don’t fit the mold of what it means to be “normal”. Hollis’ tale is gripping as the perils of his uncertain present force him to examine the shameful secrets of his past and his own role in creating the state of isolation he claims to crave. It had one of the most satisfying endings I’ve read in a while, capping what was overall one of the best novels I’ve ever read of modern-day rural America.