May 18, 2021
Hailed as "breathtakingly suspenseful," Jean Hanff Korelitz’s The Plot is a propulsive read about a story too good not to steal, and the writer who steals it. 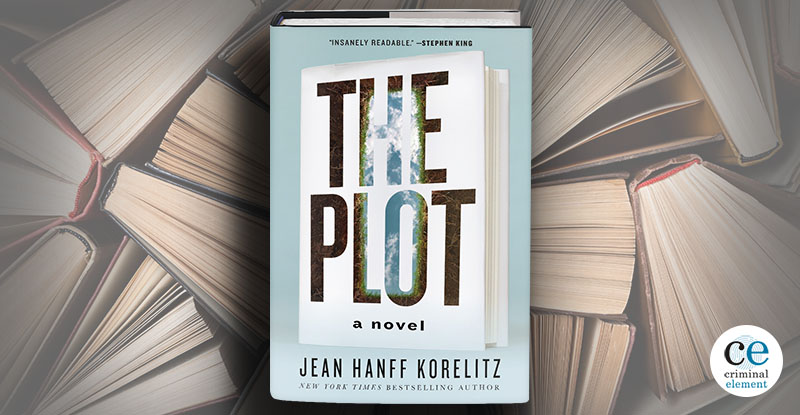 The plot of The Plot is compelling and believable. A failed novelist appropriates a brilliant plot and before you can say New York Times bestseller list, he’s “back in the high life again.” Of course, nothing is ever that simple.

Novelist Jacob Finch Bonner was once a rising star in publishing. His first book received critical praise and his future looked bright. Years later, he’s a visiting author at the third-rate Master of Fine Arts (MFA) Ripley Symposia. But what advice can a writer who hasn’t written in a word in years give to students? Jake is phoning it in, barely able to muster enough politeness to play his part.

Most of all, he was not looking forward to pretending that he himself was still a writer, let alone a great one.

One of the students is Evan Parker, a belligerent, self-confident young man. Students at the Ripley Symposia are expected to comment on their classmates’ works in progress. Not Evan. He’s incredibly tight-lipped, claiming that his plot is to die for. Evan allows Jake to read the first chapter of his book, after which he recounts the rest of the tale. Evan may be an arrogant prick, but he’s not wrong: the plot is mesmerizing, quite unforgettable.

Time passes and Jake’s life gets worse and worse. He leaves New York City for a job, one where he’s a concierge for a writing program slash boarding house. He’s so broke, he’s not sure he can replace his car if it dies. Is it the sensation of hitting rock bottom that inspires Jake to look up Evan Parker? Over the years, he’s wondered half-heartedly why he hadn’t read about Parker’s meteoric success. Nothing pops up immediately.

Then he saw, at the bottom of the page: “Searches related to ‘evan parker.’”

And below that the words: “evan parker obituary.”

Evan died just a few months after the writing workshop. It doesn’t take long for Jake to arrive at an inevitable conclusion.

Later, of course, Jake would go back to this moment. Later, he would recognize it for the crossroads it was, but already he was wrapping this stark, years-after-the-fact set of circumstances with the first of what would be many layers of rationalization. Those layers had not much at all to do with the fact that Jake was a moral human being with, presumably, a code of ethical conduct. Mainly they had to do with the fact that he was a writer, and being a writer meant another allegiance, to something of even higher value.

Which was the story itself.

After all, not only is Evan dead, but his book is also moribund. There’s more than a whiff of self-justification: “Good writers borrow, great writers steal, Jake was thinking.” Even that thought is unoriginal, it is attributed to T.S. Eliot.

Even if Parker’s manuscript actually existed at the time of his death, Jake had never seen more than a couple of pages of it, and he remembered little of what he had seen: the mother, the daughter, the ring of pineapples around the door of the old house. Surely what he, alone, made from so little would belong to him and only to him.

Jake convinces himself that his decision to write Crib isn’t really theft. Fast forward three years—there are “over two million copies in print” of Crib. Jake’s life is everything he once dreamed. He’s so busy he’s barely lived in his newly purchased apartment. The only thing that causes him discomfort is a specific question: “How did you come up with your plot?” One day Jake opens an email that causes the bottom to fall out of his world: “… though the message was brevity itself at a mere four words, it still managed to get its point across. You are a thief, it said.”

Horrors. It’s not like Jake hasn’t ruminated about famous literary frauds. At the deepest level, he knows he was not the creator of Crib.

All of it, at any time, might be ripped away from him—rip, rip, rip—and so quickly that Jake would find himself helpless and annihilated even before he knew what was happening. Then he would be relegated to the circle of shamed writers forever and without hope of appeal: James Frey, Stephen Glass, Clifford Irving, Greg Mortensen, Jerzy Kosinski . . .

This is not a club anyone would want to join. Understandably, with his life and reputation on the line, Jake doesn’t fess up to his readers and publishers. He decides to find out “more about his late student, and what he discovers both amazes and terrifies him. “

I’m not going to give away the plot of The Plot—I won’t have to, because readers will race-read to find out the truth behind the plot of Crib.