May 24, 2021
Mary Dixie Carter's The Photographer is a slyly observed, suspenseful story of envy and obsession, told in the mesmerizing, irresistible voice of a character who will make you doubt that seeing is ever believing. 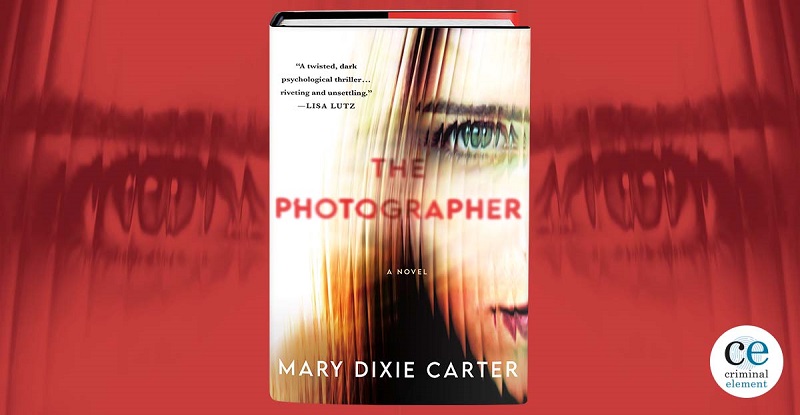 What makes something real? Is it something tangible, or is it the feeling something evokes? Mary Dixie Carter poses this question in her psychological thriller, The Photographer. This novel follows a photographer, Delta, who becomes engrossed in the life of her clients, and in doing so seems to create her own version of reality. However, when Delta begins to will that reality into existence, her worlds start to collide. The lies she has armed herself with throughout her life cannot coexist, and the fragile constructs they are built on begin to crumble.

From the onset, Carter establishes her main character as someone who sees the world through her camera lens, and in doing so can only envision her life through that same lens.

Many people don’t realize that I use my camera to interpret the world around me. It’s another set of eyes.

Delta is portrayed as an outsider, someone who looks in on the life of the wealthy and elite but will never live that life. Until she encounters the Straubs—they are everything she’s ever wanted. Delta’s world is upended upon meeting this seemingly picture-perfect family, and she instantly feels the need to be a part of their lives. And she knows that she can be if she curates this new friendship as carefully as the photos she takes for them.

I paid attention to the minutiae until it became second nature. I didn’t want to appear to be striving for something that I wasn’t inherently given at birth. Yes, I’d been born into white trash. But I myself had a drastically superior mind and sensibilities.

The need to become a part of this family starts slowly, first innocently sharing a glass of wine, then progressing to babysitting the Straub’s daughter, and finally, Delta becomes a staple within their home. However, the reader also sees Delta’s character develop from someone in need of acceptance to someone on the brink of madness. She can’t help but visualize herself in their lives—best friend to the wife, lover to the husband, mentor to the daughter. Carter starts to foreshadow Delta’s unraveling throughout the novel, hinting at the consequences of what she is doing.

I sat down to read an article on a gang of counterfeits from Lima, Peru. I learned that master counterfeiters are artists with a terrific desire for recognition. They’re so hungry for praise that they often give themselves away inadvertently.

As her obsession evolves, she continues to devolve. Carter purposefully unveils that Delta has a dark side—an insatiable need to belong coupled with the unstoppable motivation to get what she wants. However, Delta seems to have created so many realities for herself that the reader begins to question which, if any, are the truth.

Overall, The Photographer is an experience that takes the reader on a fast-paced psychological journey, where the more you learn about the characters, the more you question them. As a loyal fan of unreliable narrators, this book had me hooked from page one, and it would be an understatement to say that I could not put it down. Carter’s debut novel is dark, compelling, and thrilling—and most certainly not one to be missed.