March 16, 2022
The Patient's Secret by Loreth Anne White follows the stories of three women whose lives intertwine after a brutal murder turns their idyllic lives in Story Cove upside down. 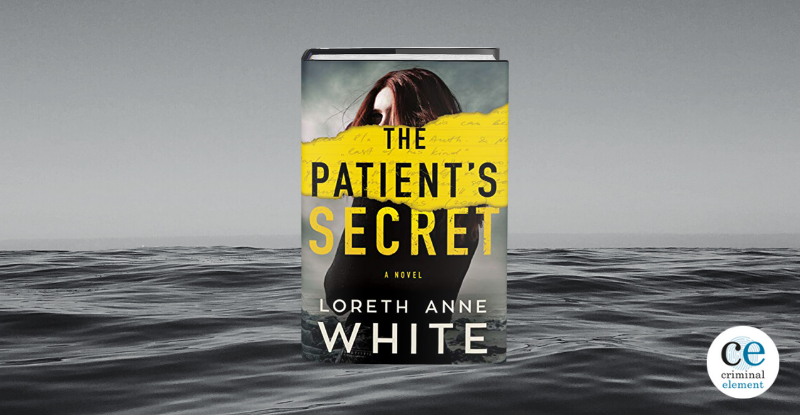 Early one morning a female jogger runs for her life. She’s terrified because the person coming after her is relentless. She tries to hide in the underbrush but “he’s almost upon her and she can’t take it.”

She screams, bolts up out of her hiding place, and staggers forward like a wounded deer.  Suddenly she’s out of the trees and there is black emptiness before her. She’s reached the edge of the forest. The cliffs. The ocean. She spins around, but he’s right there. She’s trapped.

The Royal Canadian Mounted Police (N.B. the story is set near Victoria, British Columbia) don’t ride to her rescue: there is no happy ending. She loses her footing: “A scream surges from her chest as she falls and spins and spirals downward in the lashing rain and driving wind,” and dies, a crumpled broken body on the pebbled shore.

Dr. Lily Bradley is a psychotherapist with an active practice which she operates out of her home in Story Cove, an affluent ocean-front community (fictional). Lily is all about being organized and maintaining a rigid routine.

“Stacking” her habits to build a perfect life is what gives Lily control over her world. She needs routine.

On Monday, June 20th, Lily leans into her hard-won sense of order more than usual because she and her husband, Professor Tom Bradley had a wicked fight at a neighborhood barbeque the day before. Is that why he’s off running at 5:30 a.m., “in the dark of a storm?” Lily reflects that Tom’s early morning run is not the norm.  She switches gears to meet with an early morning patient, a teenager named Tarryn Wingate. After Tarryn was arrested for shoplifting, her wealthy parents decide to send her to the neighborhood psychologist. It’s no ordinary morning—there’s commotion outside and loud running in the house—and both Tarryn and Lily “see something” but only Tarryn “says something.”

Lily sees Tom rushing down the driveway toward the approaching cops. He wears an orange rain jacket over his running pants with reflective strips—not his usual red jacket. His hair is soaked—plastered to his skull. His running shoes are caked with black mud.

“Jesus, is that your husband?” says Tarryn. “What are the police doing at your house?”

Tom and Lily’s young son Matthew is the hidden chronicler of Story Cove, taking endless pictures from his attic eyrie. When he spots his distraught father, he springs into action, grabbing his digital camera: “Matthew could use a cell phone to take photos, but he’s going to be a famous reporter one day.” The last member of the Bradley family is Phoebe, a youngish teenager who presents as a somewhat alienated Goth, changing her hair color frequently. Tom is at least a decade older than his wife but the Bradley clan is not that unusual a nuclear family.

Rulandi “Rue” Duval, takes Tom in for questioning.  In the wake of a string of “deadly sexual assaults on female joggers,” Rue was the police liaison with the press—a high-profile detective.  Things are not as they seem in the world created by suspense novelist Loreth Anne White. The Patient’s Secret is “inspired by a horrific true crime” and there’s an undercurrent of palpable accuracy to the events.

It seems to both Lily and Rue that everything was copasetic before “sensual and free-spirited Arwen Harper” came to Story Cove. Arwen is a grown-up hippie with a sixteen-year-old son in tow. She drives the favored car of an earlier era—a “hand-painted VW van.” She gets a job as a waitress at the local watering-hole. Charming and provocative, Arwen is a catalyst for change, particularly among the men (including Rue’s habitually philandering husband). Does Arwen “know” her new neighbors better than they know themselves? After Arwen arrives in Story Cove, Lily receives missives from a stalker who seemingly knows a lot about her past—is it a coincidence or is there a connection?

The dead woman is Arwen Harper. When the news is released, everyone in Story Cove looks askance at their neighbors. Arwen’s son is dating Phoebe Bradley, much to the dismay of Dr. Lily. Tentacles emerge connecting Arwen to many inhabitants of Story Cove, no longer an idyllic community, given the rifts and suspicions that are rife.

There are spoilers ahead; be warned. The Patient’s Secret is loosely patterned on a true life Canadian crime—a horrific familicide.  Loreth Anne White lives in the province of British Columbia, switching between Victoria on Vancouver Island and the mountain town of Whistler and that familiarity informs the descriptions of the fictional Story Cove. Like her earlier thriller In the Deep White delivers a complex, multi-layered tale that will have readers stunned by the twists and turns in the plot.