February 8, 2022
The Overnight Guest by Heather Gudenkauf explores what happens when true crime writer Wylie Lark gets trapped in a haunted and isolated farmhouse during a snowstorm. 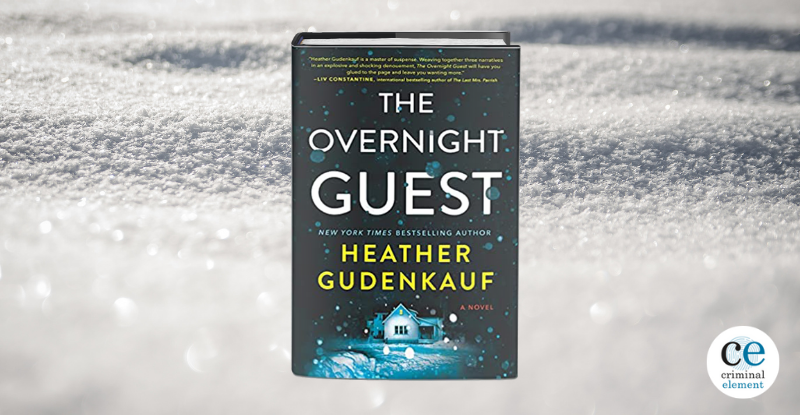 Wylie Lark is a true crime writer. Her latest project has her renting an old farmhouse in Burden, Idaho, in order to better research her next book. Several decades ago, middle-aged couple William and Lynne Doyle were brutally murdered in that very same house. Their teenage son Ethan went missing, as did the best friend of their daughter Josie, a tween girl named Becky Allen who was sleeping over that night. The only remaining survivor of the massacre was 12 year-old Josie herself, who ran into a neighboring cornfield to hide soon after the shooting started.

Josie was never able to identify the shooter, but suspicion quickly fell on sixteen year-old Ethan, who’d hit a rough patch in his relationship with his parents. While police and press speculated as to whether Ethan and Becky had plotted the murders and run off a la Bonnie and Clyde, a traumatized Josie maintained the innocence of both her brother and her best friend, even if she sometimes doubted her own convictions.

Now in the present day, Wylie is looking into the still-unsolved murders and lingering far longer in Idaho than she’d originally intended. Much of this is due to her conflicted feelings regarding her own teenage son Seth back in Oregon:

Wylie wanted to talk to her son. She wanted to apologize for just taking off. She had been so frustrated with him, so tired of the arguments, of Seth pitting her ex-husband against her. And when he took off that night and didn’t come home–that was pure torture. She didn’t know where Seth was, who he was with, didn’t know if he was alive or dead.

Wylie had taken the easy way out as a parent. Seth’s words had hurt her so much. He hated her, wanted to go live with his father. Wounded, she used finishing her book as an excuse, came to this sad, lonely place.

With a blizzard closing in on Burden, Wylie is resigned to holing up in the farmhouse for just a little while longer, even as a series of unfortunate events cuts off her contact with the outside world. She has enough firewood, though, so should be fine… at least until her dog finds something unusual out in the snow.

At first, Wylie is terrified that the small form nearly frozen to the ground is already dead. When she sees that the little boy is still breathing, she quickly brings him inside. The near feral child regains consciousness but is extremely mistrustful of her, even as she urges him to wait inside where it’s warm while she ventures forth to see where he might have come from. She discovers a crashed truck and an unconscious woman trapped in barbed wire a short distance up the road… but when Wylie returns with wire cutters in order to free her, the woman has disappeared.

Deeply unnerved, Wylie decides to concentrate on helping and connecting with the silent child in her home. Something extremely strange is going on, and she’s determined to protect him from whatever harm may come. But will her own fears hamper her when the crucial moment arrives?

Her rational mind knew that she had nothing to fear, but she couldn’t think. Beads of cold sweat popped out on her forehead and a low hum filled her ears.

Unsteadily, she sat down on the top step. She couldn’t catch her breath; the air wouldn’t fully enter her lungs. It was blocked by something that had lain dormant for years. Something black and oily slid into place and took hold.

Wylie pressed her fingers to her throat as if she could pry away its cold grip. Night had finally found her unprepared, and Wylie felt she might suffocate.

Interspersed with Wylie’s story are the events of the Doyles’ murder, told from Josie’s conflicted, guilt-stricken point of view. In addition to these is the tale of another girl trapped in an unimaginable captivity. The way these threads intertwine makes for compelling, if nightmarish reading, as we cheer Wylie on not only to uncover the truth but also to prevail against horrifying odds in order to see justice done for both past and on-going crimes.