October 16, 2019
The Off-Islander is the first book in Peter Colt’s gritty new series set along the New England coast featuring Andy Roark, a Boston-born Vietnam veteran and P.I, who is hired to find a missing father—but may find far more than he bargained for . . . 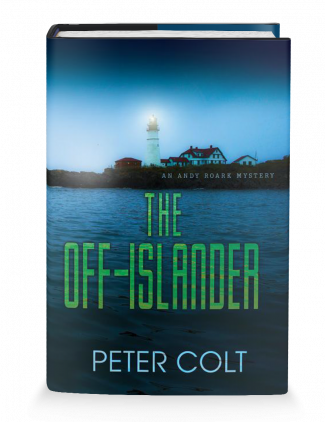 Reviewing a great book is easy. Reviewing a bad book is easy. Reviewing a book that walks the fine line between those two subjective terms is much harder. Peter Colt’s The Off-Islander inhabits that space. On one hand, it is an interesting narrative about a man suffering from PTSD who ran away from his family and the private investigator that’s tasked with hunting him down. On the other, it is a slow, clichéd narrative packed with repetition that tries too hard to be a classic noir.

Andy Roark is Vietnam veteran that has been struggling to gain a sense of normalcy and belonging in his life for a decade. First, he was a cop, but that didn’t work out. Now he makes a living as a private investigator who mostly works infidelity and insurance fraud cases. Unlike Roark, his childhood friend Danny Sullivan made something out of himself despite sharing Roark’s same Southie roots. Sullivan, a lawyer, hires Roark to help one of his clients, Deborah Swift, with an important case. Swift’s husband is trying to make waves as a politician in California politician, so Swift is trying to track down her father, who ran away from home when she was a little girl and was last seen on Cape Cod. She wants to take care of anything that might affect her husband’s aspirations if his opponents go digging. Unfortunately, Swift’s father vanished a long time ago, moved around a lot, and left behind no trace after receiving a couple of checks at an address. Other investigators have found nothing, but Sullivan and Swift are convinced Roark’s local status will make people talk to him. When Roark follows a lead to Nantucket, he finds himself involved in a case that goes deeper than he imagined, and that might be far more dangerous than any of them could have thought.

As mentioned above, there is a great story at the core of The Off-Islander. There are also a healthy dose of intrigue and a few scattered action sequences that are a treat to read. However, the novel’s pacing is slow because the narrative is bloated thanks to overwritten passages. For example, Roark never drives from point A to point B; there are always longwinded descriptions of each drive, and most of them include something about the weather…and about his car:

The wind drove the rain hard at the Ghia, and when I went over the bridge across the canal, the wind blew the deer all over the bridge. The public radio station out of Boston was a mix of static and faint jazz. It didn’t matter, because it was hard to hear over the rain beating against the roof of the Ghia. On the curves, the Ghia hydroplaned a little, and my having been drinking steadily since noon didn’t help. The roads were mostly empty, save for a delivery truck or two.

The Ghia, which is named time and again, is only the tip of the iceberg in terms of redundancy. In fact, there are passages when the story is so repetitious it’s hard to place the blame on Colt because there are plenty of things an editor should have noticed and helped fix. The same goes for mixed words, the best example of which is a moment were Roark is talking about a woman’s enunciation and what’s written is “annunciation.”

While pacing and repetition are two problems that will bother most readers, there is one that will only be an issue for some: that the author tries to hard to drive home the point that this is a noir. Constant rain, perennial drinking, thinking about a fedora (not a joke), jazz, cigarettes, more scotch, and more cold, rainy weather, and shrugging in and out of coats while walking in and out of bars make this a tribute to classic noir that tries too hard:

I poured a drink near the window, looking out at the cars, sipping scotch, and smoking a cigarette. The headlights of the passing cars went by, their lights defying gravity and crawling up the walls and impossible angles. The trees on the avenue were swaying back and forth like a couple of drunken dance contestants. Leaves floated by and spiraled down to the wet ground. I sipped my scotch and smoke my cigarette and was just as alone as when I had woken up. Charlie Parker was playing his saxophone music on the radio.

As mentioned above, The Off-Islander has a few elements going for it. The first is the story itself, which could have made for a superb novella is the fat had been trimmed from the novel. The other two are the way Colt writes about PTSD, which is something crime fiction needs more of, and the way he talks about what happened in this country after Vietnam: “America was like a family and a holiday dinner that just got over a big fight and was pretending that it hadn’t happened, that everything was normal.”

A great story is necessary for a great book, but one that is surrounded by overwriting, recurring themes and words, and a few racial slurs is a story that will have a hard time pleasing readers. Roark is a likable character and Colt is a writer who can craft a plot. This means Roark has a chance at becoming a solid series, but only if these major shortcomings are dealt with.