March 1, 2022
From the author of the breakout thriller Every Last Fear, comes Alex Finlay's electrifying next novel The Night Shift, about a pair of small-town murders fifteen years apart—and the ties that bind them. Read our review! 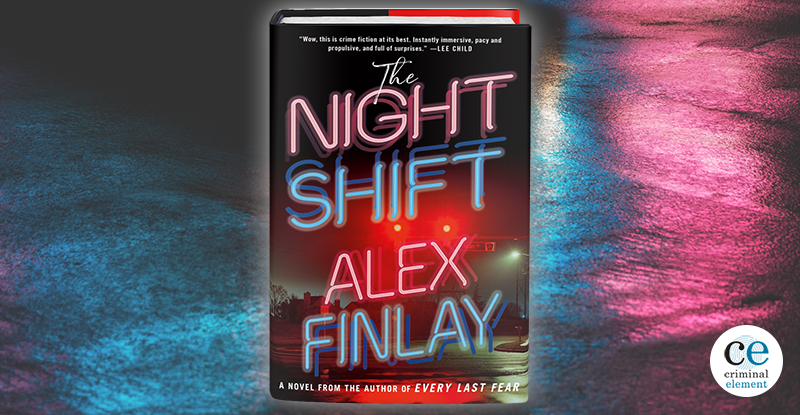 Pseudonymous author Alex Finlay made an impressive debut with last year’s Every Last Fear. That book—about a family tragedy that wasn’t the accident authorities claimed—won over readers and reviewers alike and made numerous Most Anticipated/Best Of lists. Finlay’s work has been translated into more than a dozen languages and optioned for television and film. His eagerly awaited second novel of suspense, The Night Shift, drops this March.

The book opens with a prologue. It’s New Year’s Eve 1999 in Linden, New Jersey, and Ella Monroe is working at Blockbuster with friends Candy, Mandy, and Katie, and their manager, Steve. With the whole world anticipating a Y2K-related calamity, the girls just want to get through closing. But an assailant with a knife has other plans for them, and only Ella survives the attack. An acquaintance of the victims, Vince Whitaker—known around town as a small-time drug dealer—is later charged with the crimes though he disappears before the case can go to trial. The presumption of guilt follows him, and the tragedy soon fades from the headlines as those involved find ways to go on with their lives, albeit forever changed.

Fifteen years later, in the same small town, it happens again—this time at the Dairy Creamery. Four girls, three of whom are dead. Ella, now a counselor, is summoned to talk to the sole survivor, troubled foster child Jessica Duvall, in hopes that their shared experience will help to move the investigation forward. And Jessica reveals a bombshell—the words her attacker whispered: “Goodnight, pretty girl.” The same words Ella’s attacker spoke before making his escape. Given the similarities to the earlier crimes, FBI agent Sarah Keller (a scene-stealer in Every Last Fear)—very pregnant with twins—is also called in to assist the local authorities; she is partnered with an eager young detective and tasked with reviewing the earlier case to make sure nothing was missed that relates to the present-day slayings.

The Night Shift is one of the year’s most buzzworthy books, and for good reason.

Following the prologue, the story is presented over three days and through three perspectives: Ella’s, Keller’s, and Chris Ford’s; Chris is Vince’s younger brother (he took a new last name following his adoption), a public defender with (questionable) involvement in Jessica’s legal representation. This structure not only begets a sense of urgency but allows readers intimate access to the characters (and their innermost thoughts), all of whom possess some knowledge and agenda(s) that remain otherwise unseen. The pacing is frenetic, but Finlay offsets this with a series of gut punches that land heavily as past and present collide in nightmarish ways. It’s entertainment, for sure, but not without casualty and consequence—which honors the profundity of real-life violence and its aftermath.

The Night Shift is one of the year’s most buzzworthy books, and for good reason. With a humdinger of a hook that demands immediate, and absolute, attention, Alex Finlay proves that he’s no one-hit wonder. In fact, readers may prefer this one to his debut simply on premise alone—though the execution of the idea lives up to its promise. If you’re looking for an up-all-night, eyes-wide-open experience this is the book for you.

Read an excerpt of The Night Shift by Alex Finlay