April 15, 2022
USA Today bestselling author Carter Wilson's The New Neighbor is a chilling psychological thriller about Bury, NH, and a crossover to his previous novel The Dead Husband. 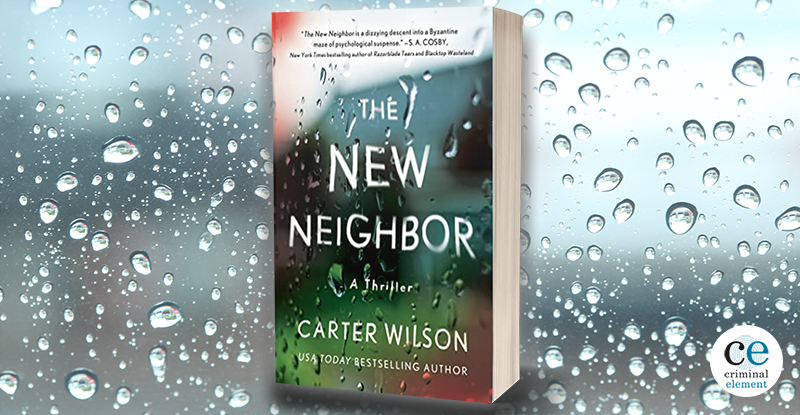 What happens to Aiden Marlowe and his seven-year-old twins Maggie and Bo is almost unimaginable. On the same day that they bury Holly, his wife, and their mother, Aiden wins the Maryland Powerball, using the same numbers he’s turned to for fifteen years. Thirty million dollars before taxes. He’s a superstitious man from Ireland, a land where there’s a superstition for just about everything. N.B. Maryland is one of the few states that doesn’t reveal the names of lottery winners.

Aiden is grief-stricken and can’t conceive of staying in Baltimore. The money will give his family a fresh start. Or will it?  Irish writer Jamie O’Neill (At Swim, Two Boys) sums up Aiden’s dilemma.

“They do say money is the root of all evil.”

“I thought that was supposed to be the love of money.”

“There’s neat for you. ‘Tis them without it that loves it best.”

It’s apropos: Aiden met Holly when he was an impecunious, feisty bartender at Marlowe’s, his dad’s pub in Dublin. Aiden had put his dreams of studying English at university on hold when his dad asked him to help get the bar on a steady financial footing. When Holly walked into Marlowe’s, he felt a “tingle of energy.”

She sat at the bar and ordered a Guinness.

It’s my first time in Dublin, so I wanted to have an authentic experience, she’d said. I thought a Guinness in a local pub would be a good way to start. Her American accent was gentle and unrecognizable. Definitely not Texas or New York, the ones I could identify the easiest.

I poured her a draught and placed it in front it in front of her, catching her scent along the way. Like flowers, brand new to the world. And her eyes, dark but gleaming. Sounds mad but she seemed to glow.

Aiden is a goner for Holly. A painful pleasure of The New Neighbor is hearing Holly come alive in Aiden’s memories. She never put up with any of Aiden’s guff, calling him out at their first meeting for fresh bruises on his face and torso from recent bar fights. He tries to sluff it off but Holly isn’t having it: “From that first moment, Holly wasn’t a person I could hide from without serious effort on my part.” Aiden doesn’t know how he’ll live without her. Holly’s spirit haunts him—he remembers her words when they were newlyweds and he was adrift: “Figure your shit out, Marlowe.”

To put it brutally, is Aiden bringing his shit with him when he moves to Bury, New Hampshire? He found the New Hampshire mansion online, paid cash for it and ignored the house’s troubled history. Troubled as in the previous family sort of disappeared—a rumor or reality? His kids dislike the house on sight. The issues might dissipate if bad things didn’t start happening right away. Aiden receives a hand-delivered letter: it’s a doozer.

We love your home. We’ve been watching it a long time.

Question: Did you know that winning the lottery actually INCREASES your chances of suicide? The numbers must really skyrocket when you also take into account a freshly dead wife. It must be a struggle. We can only imagine the effect it all must be having on your little ones.

But we don’t agree. We think you should stay right in this new house of yours.

In fact, we insist upon it. Don’t think about leaving—this house needs you. We’ll be back in touch soon.

It feels like the beginning of a horror movie. Chief Sike and local police are not helpful. Aiden decides to throw a welcome-to-the-neighbor party and invite lots of townspeople, in the hopes of sussing out the person(s) behind the poison pen letters. In the middle of it, Maggie disappears. Other than Maya, his post-Powerball lawyer, Aiden has no one in his corner he trusts so he asks his da to come for an extended visit.

Petrified in the aftermath of Maggie’s temporary disappearance, Aiden resolves to find out who’s torturing him. Who needs the police? He’s not prepared to be blackmailed or beaten down but it takes a toll on him. His bar owner dad notices how much Aiden is drinking and so do his kids. They don’t like it. Aiden obsesses about who is close enough to “see” him and his family. He is really scared—and the house has a haunted vibe. The escalating threats against him and his family are enough to give anyone the willies.

“The surest way to ruin a man who doesn’t know how to handle money is to give him some.” ― George Bernard Shaw

Should he have turned down the money? How do people in his new community know that he’s a lottery winner? Welcome to the dark web. Aiden learns that for a price no information is unobtainable. He has off-sourced all his decisions which is understandable in the short term but it leaves him and his kids dangerously vulnerable. Readers of The New Neighbor are signing up for a ride on a frenetic and terrifying rollercoaster: it’s a top notch domestic thriller.