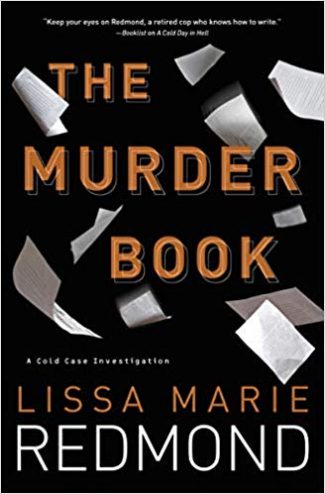 The Murder Book is the second novel in Lissa Marie Redmond’s Cold Case Investigation series. When detective Lauren Riley wakes up in the hospital, she’s certain of two things: she was stabbed and left for dead . . . and the person who did it was a cop.

Buffalo native Lissa Marie Redmond may be a relative newcomer to the crime fiction community, but she’s got the real-life bonafides to make readers take notice. A police officer from the age of twenty-two, she retired after more than two decades on the force—but not before marrying a fellow detective, having two children, and collecting an array of experiences and stories to draw on for her creative endeavors. Redmond has had several short stories published in anthologies, and her debut novel, A Cold Day in Hell, came out in 2018. Her newest, The Murder Book, marks the second entry in the Cold Case Investigation series featuring Detective Lauren Riley.

Read a review of A Cold Day in Hell, the first book in the Cold Case Investigation series.

As the story begins, readers find workaholic Detective Lauren Riley—a divorced, empty-nest mother of two— in her second-floor office at the Buffalo Police Cold Case Homicide Unit, where she’s just finishing up a twelve-hour shift before clocking out for the weekend. It’s after 7 PM, her partner, Shane Reese, has just left, and all is quiet. Then, the office door opens and Lauren is viciously attacked. Only having time to register an obscure figure in a pair of county-issued boots and Murder Book in hand, Lauren quickly drifts into unconsciousness. Two days later, she wakes up in the hospital.

Despite the distractions of family—her parents, daughters, and sister have all descended to keep bedside vigil—and acute pain (compliments of a near-fatal stab wound that punctured her lung), Lauren is not at all hazy on one particular truth: that a cop did this to her. Therefore, she’s positively itching to get discharged so she can find out who and why, and whether or not she was targeted by her assailant—even if she can’t (officially) be an active participant in the investigation. Fortunately, Shane agrees to move in to Lauren’s house until things are resolved, which appeases her family enough to disperse (as does Lauren’s begrudging agreement to join Facebook). But neither is content to stand by idly waiting for answers.

The ensuing police inquiry is delicate business, made more so when a second attack leaves an off-duty cop dead and draws scrutiny to Lauren and Shane. Then, there’s the matter of an anonymous tip that heats up a cold case and could have far-reaching implications if the tipster’s information can be verified. These events may or may not be connected to Lauren’s current predicament, but her determination to find out the truth—and the sundry cast of characters she associates with to do so—puts her firmly in the crosshairs. The resultant procedural aspects of the case are less than routine, given Lauren’s remove from day-to-day operations; though technically permissible in the eyes of the law, some of the more discretionary tactics may strain credulity in readers who hold a more conservative view of justice.

The relationship dynamics, too, are mixed in their effectiveness. For instance, the playful, platonic partnership between Lauren and ladies’ man Shane works largely because it avoids the romantic tension that has become rote in police-driven thrillers. But some of Lauren’s other entanglements, whether personal or professional, come off as superficial and/or studied (regardless of how critical they may actually prove to the plot). This is the risk that an author runs when revisiting characters and circumstances from a previous book that readers may not be familiar with; consequently, those who haven’t read A Cold Day in Hell might find themselves a bit overwhelmed by the influence of Lauren’s past on her present.

Ultimately, though, The Murder Book is a compelling whodunit with a fierce and fiery lead who will stop at nothing, and nobody, for the sake of a cause. This, coupled with Redmond’s uniquely authoritative voice and vision of Buffalo, makes for a memorable if marred read.

Check out a guest post from author Lissa Marie Redmond: “9 Books, Movies, and TV shows that Get Police Work Right.”