December 16, 2021
Emma Holmes and her crew of all women PI's face off against her police chief husband and the Brighton police in an effort to find the killer of Verity Malone's dead husband in Elly Griffith's new mystery The Midnight Hour. 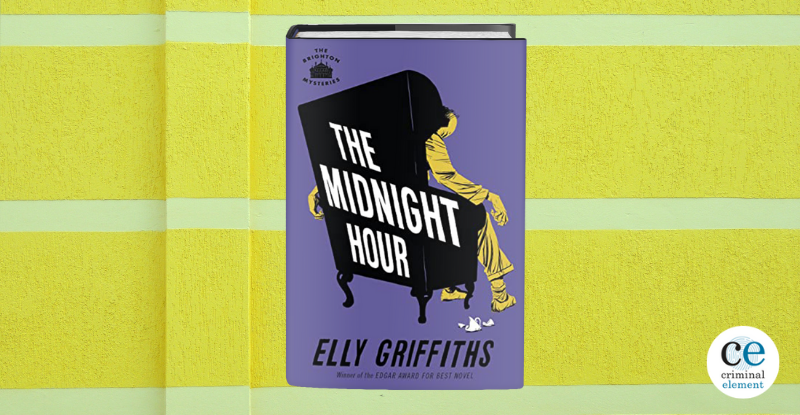 Though this was the sixth book in the Brighton Mysteries series, it was very easy for me as a newcomer—albeit one who has enjoyed other Elly Griffiths novels—to jump straight in. It’s 1965, and the intrepid private detectives of the Holmes And Collins Detective Agency have just picked up an intriguing case. The retired entertainment impresario Bert Billington has died, and his youngest son Aaron has rather publicly accused his own mother, Verity Malone, of the crime. While Aaron doesn’t think Verity killed Bert on purpose, he does find the fact that she’s been reading American books on feminism highly suspicious. An exasperated Verity engages Emma Holmes and Sam Collins to find out the truth even before it’s ascertained that Bert was indeed killed with rat poison.

As former policewoman Emma is married to local police chief Edgar, this sets her to the delicate task of using her connections without stepping on the toes of the cops who’ve been tasked with officially investigating Bert’s death. Luckily, Emma’s old friend Detective Inspector Bob Willis has been assigned the case, with the able assistance of Woman Detective Constable Meg Connolly. Emma and Meg quickly bond over their shared interest in detection, as well as their shared experience of being female police officers, even as Emma tries not to let her envy of the younger woman show. She founded the detective agency because respectable married women of the 1960s did not remain on the police force, and especially not with three young children to rear. She can’t help feeling wistful though, and understandably constrained by her role in life:

But this morning she kept thinking about the case. She envied Sam who was interviewing Aaron and then, possibly, [Aaron’s older brother] Seth. It should be me, she thought. I’m the one who used to be a detective. Why wasn’t Edgar supervising the riding lessons? Because he had to work, of course, and his work always trumped everything. The previous superintendent had spent most of his time on the golf course but Edgar was more conscientious. It was one of the things Emma had loved when he was her boss. It seemed far less lovable now, though.

Emma and Sam’s investigations soon lead them to Max Mephisto, former stage magician turned film actor, and a friend to them both. Max is filming a horror movie in Whitby with Seth Billington, the middle child of the three sons Bert and Verity had together. Max is feeling an existential ennui at his change of career, and almost welcomes the distraction. But his involvement with the case will have life-changing repercussions, even as Bert’s killer seemingly strikes again.

This was another terrific fair play mystery that I guessed the solution to right before the culprit was revealed, making me feel as if I too were a detective on the case. I also empathized greatly with Emma and Meg, who are endearing characters forced to make do in a world of rampant misogyny where women’s rights are still very much curtailed. Ms. Griffiths has a gift for both characterization and setting, really bringing her story to life, with appropriate frissons of humor:

Max watched sourly as the sun set behind Whitby Abbey, the shadows turning the arches into portals to another world. Did Whitby have to go around looking so atmospheric all the time? It was like being trapped in a French art film. The ruins, the cliffs, the houses huddled by the shore, the fishing boats in the bar. The whole town felt like a backdrop. And now, as the cameramen exclaimed about the light, Seth came striding through one of the archways, his black cloak billowing out behind him. The Prince of Darkness, brought to you by Savile Row Tailoring.

While there were several loose ends that I felt could have been tied up more securely, overall this was a highly satisfying mystery that skillfully blends actual historical events with fictional but still plausible murders. Most importantly, it doesn’t whitewash the past, frankly depicting how women—and in certain cases men—were forced to cope with limiting stereotypes and, at least in the case of the characters here, rose above them with aplomb.

Listen to an audiobook excerpt of The Midnight Hour by Elly Griffiths!