May 9, 2022
A delightfully clever new mystery from Robert Thorogood about a group of amateur sleuths who come together to form The Marlow Murder Club after a shocking murder in their quiet town. 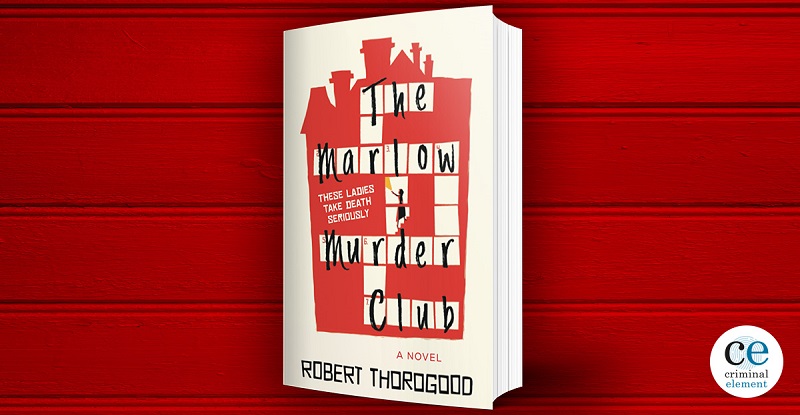 Judith Potts is a bit of an eccentric, living happily alone in the Marlow mansion she inherited from her late Great Aunt Betty, along with a portfolio of investments that keep her well off. Setting crosswords for national newspapers keeps her mind occupied. For physical exercise, she likes to slip nude into the River Thames, accessible via the boathouse at the end of her garden, for an invigorating, semi-private swim. It’s on one of these pleasant jaunts that she hears a shout and a shot ring out from the garden of her neighbor across the river, Stefan Dunwoody.

Unable to breach the reinforcing wall Stefan had placed between his property and the eroding river, Judith hurries home to ring the police, then watches anxiously from her window:

If anyone had been out on the river at that precise moment and had had occasion to look up at Judith’s mansion, they’d have seen a very short and comfortably plump woman in her late seventies with wild gray hair standing entirely naked in her bay window, a cape over her shoulders as if she were some kind of a superhero. Which in many ways she was.

She just didn’t know it yet.

The trouble is, the constable sent over to investigate finds nothing amiss at Stefan’s. His boss, Detective Sergeant Tanika Malik, gives Judith a courtesy ring the next morning that leaves them both dissatisfied, as the detective is sure that there’s a reasonable explanation for what Judith heard. Determined to find out more, Judith heads over to Stefan’s herself, fighting her way into the wildest corners of his river-facing garden to find the worst sort of proof: his corpse with a bullet hole directly in the center of his forehead.

While Tanika has to accept that Judith definitely wasn’t just imagining things, she does warn the older woman against imperiling herself by looking into the matter further. Judith, of course, pays little heed. Already unconvinced of the local police’s competency, she decides to take matters into her own hands when it comes to getting to the bottom of her friend’s death. But then the murderer strikes again, killing a seemingly unrelated taxi driver. Intrigued by this conundrum, Judith applies her considerable brain power to the task of tracking down a serial killer, picking up a small group of women also concerned enough by the murders to get involved with solving them along the way.

Among these women are Suzie Harris, a professional dog walker with empty nest syndrome, and Becks Starling, the prim and proper wife of the local vicar. These crime fighters use their various strengths and resources to track down vital information, forming in the process the Marlow Murder Club. But will their club prove short-lived when a killer decides to snuff out at least one of the pesky investigators who’s coming far too close to the truth?

Robert Thorogood has written a delightful Play Fair puzzler that hearkens back to the classics of the genre while providing fresh new twists. My favorite innovation of his was the formation of the titular club itself, with each of our sleuths being fully fleshed characters and not merely investigating machines. It’s refreshing, too, that each of these women faces her own singular, quite modern, existential challenge:

When Becks’s phone rang, she was in the process of making mayonnaise with a hand whisk. She had a perfectly good food mixer that could have done the job in seconds. In fact, she lived next to any number of shops that would have sold her organic artisanal mayonnaise over the counter. But in the absence of knowing quite what she was doing with her life, Becks clung to the only truth she knew: she was a housewife, and as such, her only sanity was to be the best housewife there’d ever been. Ergo, the hand whisk.

The thoroughly relatable amount of soul-searching that each of the women involved with the Marlow Murder Club has to do over the course of the novel fits perfectly with the cozy vibes of the main plot. I was unsurprised to learn that Mr. Thorogood is also a screenwriter, so easily could I envision every scene in this well-written, entertaining book. It wouldn’t surprise me at all if this was adapted for the screen as a quintessentially British murder mystery in the near future, though you should definitely still snag and read a copy of this delightful novel first.