Book Review: The Man That Got Away by Lynne Truss 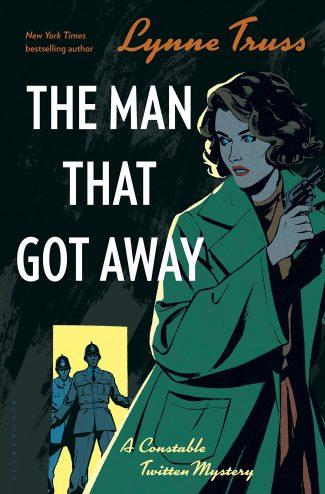 The Man That Got Away

The Man That Got Away by Lynne Truss is the 2nd novel in the Constable Twitten Mystery Series set in 1957 Brighton.

Lynne Truss once again shows off her superb command of the English language and comedy in this follow-up to her terrific debut mystery novel, A Shot In The Dark. The very first page of The Man That Got Away gives away a major plot point of its predecessor, however, so consider yourself warned if you have yet to sample any of this series’ delights. You may also consider the rest of this review a spoiler for Book One, as it’s impossible to discuss the storyline without also acknowledging said plot point, so the short version of this review for those who want to savor the first book spoiler-free: it builds on everything wonderful about the preceding novel for another comic gem firmly anchored in 1950s British culture. Now get out of here and go read that book. The rest of you may carry on here with me.

1957 Brighton, England. It’s only been a few weeks since the disastrous events surrounding the murder of theater critic A. S. Crystal, and our earnest young hero, Constable Twitten, is in an uneasy detente with Mrs Groynes, the criminal mastermind masquerading as the helpful, harmless charlady at the police station. The entirely hopeless Inspector Steine, ranking officer of their precinct, has just been asked to pose for the local Museum of Wax, for both a fee and the donation of a spare uniform. He’s quite puffed up at the idea despite it being an obvious con, but since it’s not technically illegal, Constable Twitten can’t do anything about it. Plus, it’s not like Inspector Steine relies on his opinion overmuch, given their vastly differing views on Mrs Groynes.

When the body of a young man is found on the beach in a deck chair with his throat slit, Inspector Steine is quick to dismiss it as a suicide, in accordance with his long-held belief that he defeated all the crime in Brighton upon his arrival six years ago. Constable Twitten knows this isn’t so, and when the young man’s death is ruled a murder, leaps into action. Trouble is, Mrs Groynes is offering him valuable assistance, and while Constable Twitten knows he shouldn’t accept, circumstances may soon prove that he could use all the help he can get to uncover a shockingly expansive criminal conspiracy.

I loved this book so much, but must admit that it may prove more mystifying than not to people with less of an Anglophilic bent. The cleverly constructed mystery and broad comic strokes possess universal appeal, but I fear that if you don’t share Constable Twitten’s interest in sociolinguistics, you might not appreciate a novel that uses Nancy Mitford’s Noblesse Oblige as its touchstone:

How defensive everyone got on this issue of U and non-U words! It made no sense to him. Why weren’t they fascinated by the revelation that upper-class people said ‘preserve’ instead of ‘jam’, or ‘wireless’ instead of ‘radio’, or ‘mad’ instead of ‘mental’? Wasn’t it worth knowing that an upper-class person would despise you for referring to your fish-knives or your cruet set, or (worst of all) your toilet? Snobbery was a living thing in modern British society! Surely it was important to know how it operated?

I would tend to agree, and if you’re the kind of person who can easily absorb the nuances of the setting, or let them wash over you harmlessly while you enjoy a finely crafted tale of detection, then I would absolutely recommend this book for you. Ms Truss writes in the Fair Play tradition, putting all the clues out there for us readers but, crucially, constantly turning our heads with the many different plot threads that she then deftly gathers at the end to reveal a finely woven tapestry of criminal mischief and worse.

I also very much appreciated how she hearkened back to the book that first shot her to fame, Eats, Shoots & Leaves: The Zero Tolerance Approach To Punctuation (note: like myself, she thinks the Oxford Comma wildly overused, so of course I side with her in the style wars.) Granted, the issue at hand in this book is one of grammar, not style, which aren’t the same thing though are often confused as such. In The Man That Got Away, the topic at hand is the slogan used for the newly formed brigade of Brighton Belles, a cadre of lovely young women acting as goodwill ambassadors and general assistants to the tourist masses who provide much of the town’s revenues:

Incidentally, it had taken a small committee of men in suits around two hours to come up with that slogan. It was the grammar that worried them. Did you enquire of? Or enquire from? Opinion was divided equally, and there was an awkward impasse until the young clerk employed to take the minutes piped up unexpectedly that he couldn’t listen to this any longer, and that ‘enquire from’ was technically illiterate, so at last they had their answer.

One thing to note, however, is that while Ms Truss fondly recreates 1950s Brighton for us, she doesn’t hide her impatience with the less equitable side of the culture, particularly when it comes to the legal rights of women. This attitude informs the creation of Mrs Groynes, whose brilliance and occasionally blatant criminality are constantly overlooked by an Inspector Steine who believes women simply incapable of such matters. In tandem with the snobbery of class and language at the heart of this book, it makes for a surprisingly powerful, if subtle, indictment of the very milieu lovingly showcased here. Not many authors have the skill to write something at once an homage and a critique. That Ms Truss can do so in the form of a comic mystery, and with aplomb, only speaks to her marvelous talent.