January 5, 2022
In Nita Prose's The Maid, Molly Gray, a hotel maid quickly finds herself caught in a web of deception when she is targeted as a suspect of the murder of the infamous and wealthy Charles Black. This locked-room mystery reveals that all mysteries can be solved through connection to the human heart. 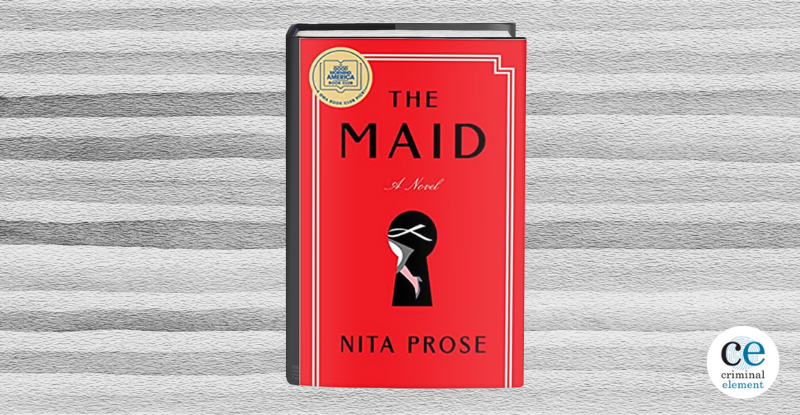 Molly Gray is a maid at the Regency Grand Hotel in addition to being quite an unusual young person, and not just in how much she loves her job. She gains a deep satisfaction from making things tidy and bringing order back to chaos. While seemingly bland and simple on the surface, she has a savant’s understanding of how her job isn’t just about physical cleanliness:

When I’m done with my work, I leave your room pristine. Your bed is made perfectly, with four plump pillows, as though no one had ever lain there. The dust and grime you left behind has been vacuumed into oblivion. Your polished mirror reflects your face of innocence back at you. It’s as though you were never here. It’s as though all of your filth, all of your lies and deceits, have been erased.

As a hotel maid, she’s well aware that she’s often cleaning up after people who are less than honest or upright or kind, even though the Gran who raised her from infancy taught her to always think the best of people until they prove themselves undeserving of such regard. Molly knows that others think her strange and awkward – she doesn’t understand social cues, for instance, and she speaks with an old-fashioned formality that comes from having your grandmother be your best friend – but she believes that everyone she’s in daily contact with nowadays gets along with her as well as she does with them. Until, that is, the day she discovers a dead body in one of the hotel rooms, and quickly falls under suspicion of murder herself.

Mr. Charles Black is a wealthy older man who often stays at the Regency Grand in the company of his young wife Giselle. He’s not a particularly pleasant person, but Giselle takes a shine to Molly, making sure to tip her lavishly and even offering makeup advice and gifts. One morning, after a particularly nasty fight between Charles and Giselle, Molly arrives in the Blacks’ suite to clean only to find Charles dead in his bed. She immediately calls Reception to ask them to contact the authorities, and stands ready to do her civic duty by the dead man by cooperating as fully as she can with any police inquiry.

So imagine her shock when the police, after taking her in for questioning, zero in on her as prime suspect in Charles’ murder. Sure, she and Giselle were closer than most maids and hotel residents might be, and perhaps money has been tight for her ever since Gran passed away nine months ago. But she would never kill for money, as the police detective assigned to her case insinuates, even if Giselle has been kinder to her in her grief than anyone else:

I truly am grateful for her guidance. With Gran gone, much of the time I feel like a blind person in a minefield. I’m constantly stumbling upon social improprieties hidden under the surface of things. But with Giselle around, I feel like I’m wearing a breastplate and am flanked by an armed guard. One of the reasons why I love working at the Regency Grand is that there’s a rule book for conduct. I can rely on Mr. Snow’s training to tell me how to act, what to say when, how, and to whom. I find it relieving to have guidance.

Molly’s neurodivergency would seem to make her the perfect patsy, not only for Charles’ murder but also for the other mysterious criminal machinations that seem to be lurking behind the respectable facade of the Regency Grand. But Molly isn’t just going to allow herself to be framed for the terrible crimes of others. Who can she trust, though, as she seeks to clear her name and bring the real criminals to justice?

For the most part breezy and readable, The Maid is an interesting meditation on the nature of “normalcy” and morality. While I didn’t agree with the underlying vigilante spirit of the denouement, I was thrilled that this book champions the voices of the unheard and ignored. Molly is a delightful, unusual heroine whose good nature is too often abused, but who learns how to turn the tables on her abusers, using their assumptions of her guilelessness to her advantage. If this book helps the neurotypical understand and be kinder to the neurodivergent, then it will have done a wonderful thing indeed, ambiguous viewpoint on murder regardless.