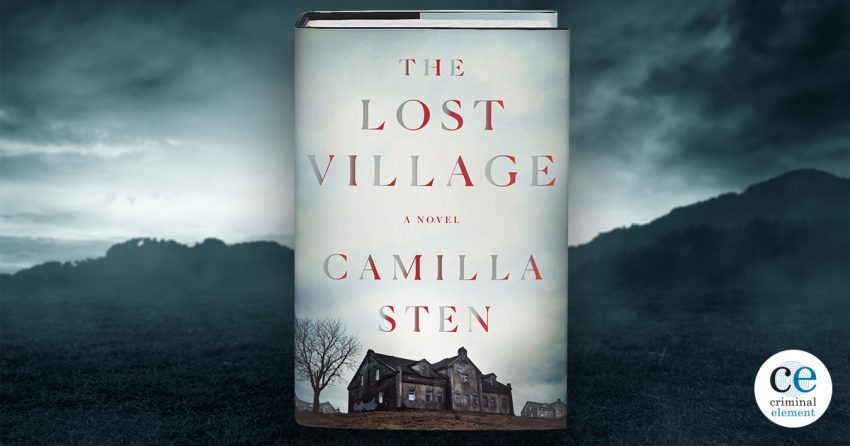 Something was very wrong in the Lost Village, which is immediately apparent to Albin and Gustaf, two policemen who were sent there in August 1959. Silvertjärn (tjärn being Swedish for lake) is a remote backwater, a “pleasant, unassuming place,” However, as Gustaf and his partner arrive on a beautiful afternoon, the community is completely silent. All they find is a dead woman, tied to a pole. She’s been stoned to death and flies are feasting on her swollen corpse.

“What in God’s name has happened here?” Gustaf asked, his tone of voice betrayed a hint of what could only be described as wonder.

Albin had no words. He let the silence of the empty village take over.

But then something cut through that silence—faint, distant, yet unmistakable. Albin had four younger siblings, and he had shared a room with all of them. It was a sound he would have recognized anywhere.

“What the . . .” Gustaf muttered, turning to look at the school on the opposite side of the square. A window was open on the second floor.

Then the stench swam back over him, and he vomited again.

Decades later, Alice Lindstedt, who grew up hearing stories of Silvertjärn from her grandmother Margareta, decides to produce a docuseries on Sweden’s sole ghost town.

I can hear my grandmother’s voice, like an echo in my ears. “The last time I saw my sister, Aina, she was only seventeen.”

Margareta had left the village before the calamity, but her sister and parents were lost, along with nine hundred other residents. Nothing about the story makes sense to Lindstedt—how could a community just fall off the face of the earth?

Lindstedt’s approach to financing the documentary is modern and inviting. Early donors get special access to the production as it unfolds: their reward is behind-the-scenes access. The closer the crew gets to the ruined town, the more uncomfortable they feel. It’s not even on GPS—in pre-production, they rely on government maps from the 1940s to pinpoint their destination. Readers may find it hard to visualize a decayed village and imagine how it might have disintegrated over time. Check out the Abandoned America website, in particular the photo essays on abandoned churches, to conjure up a sense of what the crew beheld. Alice and her crew are completely cut off from civilization, which adds to the sense of isolation.

The silence hangs compact. Not even radio signals make it out of here. They say it has something to do with the iron ore in the bedrock—some sort of magnetic field that jams the signals—but no one seems to know for sure. It doesn’t exactly run the mystique.

Abruptly, the narrative switches to a time when the village was thriving. The scene comes alive through fulsome, endearing letters from Aina to her older sister. There’s a new pastor in town, a replacement for hard-drinking Pastor Einar. Pastor Mattias is young, articulate, and attractive. The letters are woven into the narrative. There are vignettes from Alice’s great-grandmother, Elsa, a brave, warm-hearted woman, who has made it her mission in life to look out for her fellow villagers. In particular, she looks after the village outcast, Birgitta, a mentally-troubled woman.

Someone else on the crew, not just Alice, has a link to the town. Tone is the grand-daughter of the Silvertjärn baby. All told, Alice has a team of two other women and two men, all under thirty. Alice, for all her strength and planning abilities, has had a troubled young womanhood. She was hit by depression so hard in her early twenties that Emmy, her closest friend, turned away from her, perplexed and upset at her inability to help Alice. Why then would Alice invite Emmy to join her select documentary team?

Things do not go smoothly in Silvertjärn. There are inexplicable sounds, creepy shadows, and all-too-frequent intimations that they are not alone. When Emmy confides in Alice, Alice ventures that Emmy suffers from sleep paralysis, but then she sees for herself.

There, on the other side of the square. By the corner of the school. There’s someone standing there.

But the figure doesn’t disappear when I blink.

Things do not improve: Tone is injured climbing rickety stairs in one of the abandoned houses. There’s an explosion, a death, and ultimately, a confrontation. It’s so frightening. Readers will inexorably link The Lost Village to the horrors of Jonestown another mass-murderous gathering that will live in infamy. Welcome to the world of Swedish author Camilla Sten who has written a stark tale that is impossible to forget.