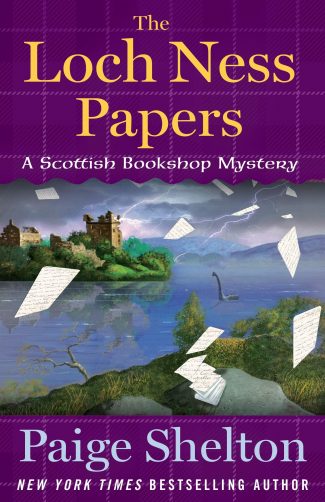 In Paige Shelton’s fourth Scottish Bookshop Mystery, The Loch Ness Papers, bookseller Delaney Nichols befriends a Loch Ness monster enthusiast. When the man stands accused of murder, Delaney will do whatever it takes to learn who the killer is—and whether Nessie herself is really lurking in the Scottish waters.

What a fun and cozy mystery we have with Paige Shelton’s The Loch Ness Papers. This is the fourth book in the Scottish Bookshop Mystery series, and we see the main character, Delaney Nichols, making new friends with intriguing characters, trying to plan her wedding, awaiting her family who is visiting from Kansas, figuring out the mystery of a priceless book and the man who brought it, and, of course, murder.

Delaney works in Edinburgh at the book store, The Cracked Spine, a shop of rare and hard-to-find books and artifacts. She is readying to marry her fiancé, Tom, and is expecting to see her family who she hasn’t seen since she left Kansas a year ago. As she goes to search for a pastor to perform the wedding, she runs into a unique man by the name of Norval Fraser. He’s an elderly fellow who has a very real obsession with the Loch Ness Monster, or Nessie. Another strange character comes by way of a Texan named Angus Murdoch. Angus brings a very rare and priceless book to The Cracked Spine with a crazy tale behind it. In the meantime, Norval’s nephew turns up murdered, and Norval is the number one suspect. Delaney finds herself in the middle of the murder investigation as she has befriended Norval and wants to help to prove his innocence. At the center of it all is the mysterious Nessie. Will Delaney be able to exonerate Norval, pull off her wedding, figure out the Texan, and find out if Nessie is real?

The setting for this story is amazing. I haven’t been to Scotland, but this tale made me feel like I was in the gorgeous and fairy-tale-like Dean Village, along with the inky, cold depths of Loch Ness. The setting was a strong element throughout, and it complimented Delaney’s character nicely. There’s a soothing quality to both, and to The Cracked Spine and the workers there. I also learned a fair amount of Scottish words as I read, which made for a fun experience. Delaney is an endearing character and made me want to keep reading to follow along with her adventures.

One of my favorite characters had to be Norval. He’s eccentric, sweet, and absolutely lives and breathes Nessie. I am a huge cryptid fan (cryptid being animals whose existence hasn’t been proven), so I loved all the parts about the Loch Ness Monster. I found myself wishing there could’ve been pictures to accompany the reports mentioned. Here’s a little bit about Norval:

“Norval Fraser is somewhat famous, locally. He’s long been obsessed with Nessie. There’s a story there, and I suspect he might tell that story if you stopped by his flat—it’s right across the street, along Buckingham Terrace—and let him know you found his cards. His flat is overflowing with his obsession, and frankly, he likes to show it off, to the right people, I guess.”

When Delaney meets Norval she soon finds out that he is looking for someone to carry on his research of the beast because he’s getting too old to be able to do it himself. His sweet and thoughtful disposition really shines through.

“He wanted my papers, all of them, he said. He said I have the grandest collection of all, and if anything could prove that Nessie is real, it’s the work I’ve done.”

“Sounds exactly like something he would do and say.”

“Aye.” His eyebrows came together, and he fell into thought.

“I understand,” I said, working hard to not sound patronizing or confused.

His eyes snapped back to mine. “No, I willnae sell, but I would like tae give them away, tae someone who will continue my work. Ye might be surprised how difficult it is tae find someone tae carry on.”

Norval had a good reason to be obsessed with Nessie.

“And what is the truth? Is there a Loch Ness Monster?”

He looked at me with eyes that verged on fierce. “Oh, lass, of course there is. There might be more than one, mind. And, it’s important tae never forget, never let anyone forget. More proof must always be searched for.”

I opened my mouth, then closed it again, as I silently debated the best route to take. Finally, I said, “Norval, would you mind starting from the beginning? Of course, I’ve heard of Nessie, but I’d like to know what sparked,” I looked around, “all of this. If you have proof that Nessie exists, I’d really like to know the story, your story, from the beginning, if you don’t mind.”

He took a sip from his mug and looked at me over it’s brill. He swallowed and then nodded.

He paused again, purposely prolonging the drama, I thought. Then, surprising me, his eyes clouded and filled with tears. He composed himself before he looked at me again.

I held my breath and hoped he would continue.

I haven’t read any of the previous entries in this series, and I hope to fix this very soon. Delaney is an easy to love character, and the setting is divine. I want to hear more from this heart warming cast of characters and their gorgeous land.