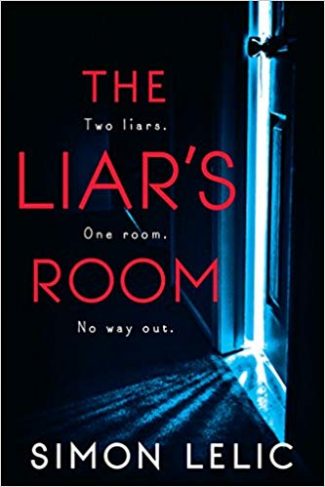 From award-winning author Simon Lelic, The Liar’s Room is a spine-tingling thriller that takes place over the course of a therapy session, in which neither patient nor therapist are who they claim to be. Two liars. One room. No way out.

Susanna Fenton is a woman with a dark secret, one she’s been carrying around for nearly twenty years. Nonetheless, she’s happy with her life now. She’s got her own counseling practice in a building she shares with her friend Ruth, a dentist. Susanna adores her 14-year-old daughter Emily, and if she’s a bit overprotective, well, that’s normal, right? Unfortunately, Susanna’s carefully constructed life is about to come crumbling down, and it all starts with her new client, Adam, who seems strangely familiar to Susanna.

Watching Adam’s reaction, Susanna realizes why she thought she knew him. It’s not his looks. It’s his smile. The way the left side of his mouth pulls higher than his right; the little glimpse he allows the world of his milky teeth. It’s a goofy smile. Innocent. Familiar.

Adam seems hesitant to talk about why he’s come to see Susanna, and she falls into her familiar routine of trying to calm new clients and explain how she can help. It’s all very normal, and in spite of that strange feeling that Susanna knows Adam, there’s nothing setting off warning bells.

“There’s something I want to do,” he says.

“Something you want to do?”

“Something…bad. And the thing is…” He hasn’t moved. Hasn’t once dropped his gaze from hers, but there’s a tiny smile now playing on his lips. And it’s not a goofy smile this time. It’s not a goofy smile at all. “The thing is, Susanna,” Adam goes on, all innocence now drained from his expression, “I don’t know if I can stop myself.”

He goes on to tell Susanna that there’s a girl that he’s worried about hurting. Not emotionally, but physically, and it’s not long before he reveals that the girl he’s talking about is her daughter, Emily. This of course sends Susanna into a panic, but calling for help is out of the question, even though her receptionist is right outside, and Ruth isn’t too far away. If she does, Adam threatens to hurt Emily, and Susanna will do anything to keep that from happening.

It’s about this time that we begin to learn why Susanna isn’t her real name and exactly what she’s been hiding for so long. It’s a doozy. Lelic does quite a lot with this book while keeping much of what makes a good thriller truly good at the forefront. The pacing is fantastic; he intersperses the scenes with Susanna and Adam with those from not only Emily’s viewpoint, but even Ruth’s. Getting a 14-year old’s voice right is hard for any adult, but with Emily, Lelic nails it. She’s naïve and sweet, and she fiercely loves her mother. She’s also ridiculously excited about the handsome boy who sweeps her off her feet and makes her feel special. Susanna and Adam’s scenes are filled with malice, and readers will enjoy their verbal sparring as Susanna tries to use her skills as a therapist to try to work the situation to her advantage. But Adam is a wily adversary, and he has almost 20 years of rage and resentment that he’s more than ready to vent on Susanna and Emily.  As Susanna’s tragic past is revealed, it becomes painfully obvious how high the stakes are.

Lelic expertly tackles the heartache, and joy, that comes with parenthood as well as the aftermath of tragedy and our helplessness in the face of it. This one has the heart of a thriller but a lot of emotional heft, and the claustrophobic feel one gets from imagining Susanna and Adam trapped in that room together only adds to the considerable suspense. Although dark, this tense and layered story isn’t without hope. I’m such a fan of this author and can’t wait to see what he has in store next.

Read a review of The New Neighbors by Simon Lelic.