November 27, 2019
Set in the serene seaside town of Shoreham, Margot Hunt's The Last Affair is a domestic thriller with scandals, heartbreak, and murder. Love may be blind, but obsession’s a real killer... 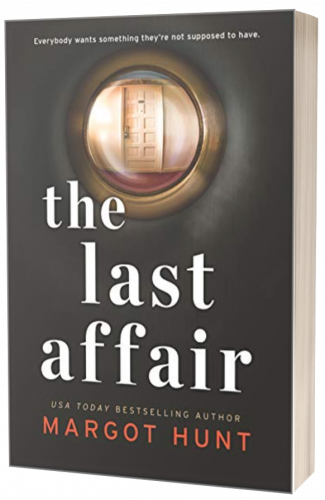 The Last Affair by Margot Hunt opens with a murder but quickly shifts gears to six months prior, as the novel starts its process of parsing through the series of events that ultimately led to the grisly killing. Really, the murder takes a backseat to the interesting intersections between the victim and possible suspects the novel identifies and then complicates. From the adulterous husband, Josh, and his mistress, Nora, to her alcoholic husband and even the dead woman, Gwen—all the characters prove likable even as they find themselves making regrettable decisions in their unhappy marriages. In fact, one could easily suggest that it is the characters’ lackluster experiences of domestic bliss that make this novel of domestic suspense more than your average thriller.

When it comes down to it, The Last Affair is about the choices characters make early in their lives and how these decisions impact their later years. For many of them, marrying too young—in their twenties—led to their eventual unhappiness, led to the affair, and, finally, resulted in Gwen’s murder. Reflecting on her own unhappy marriage, Nora remarks:

Through such moments of insight and many more—“I’ve read that kids don’t reach mental maturity until the age of twenty-five”—a clear theme underwrites the action of the novel: one must really look twice before taking the leap into marriage.

As Josh and Nora eventually wake up to their unhappy marriages, Josh and Gwen’s daughter, Abby, discovers she too has been caught in a love triangle of sorts. And when she returns home from college to find her father cheating, she believes the buck must stop with her: She has to take action and stop her father from hurting her mother the way Abby had been hurt. Thus, the book juxtaposes a younger generation’s response to double-dealing in relationships. Abby, a young woman herself in her early twenties, sees the problem in black-and-white terms, whereas her parents, along with the majority of the other members of that generation, see it as a nebulous, grey area.

Differing generational stances to relationships aside, Abby also acts as a quasi-detective figure, uncovering the comings and goings of her father, and in so doing, she begins to question not only her approach to relationships but also how much she is or unlike her mother, Gwen. This opens up other thought-provoking moments in the text that suggest the novel is more than your common murder mystery, as the reader sees through Abby’s eyes and her meditations on familial heritages. Abby must determine how much she wants to be like her parents, repeat their mistakes, and carry forth their approaches to relationships and marriage into her own adult life.

Readers will take away a lot from this text, and for audiences absorbed in watching series like Big Little Lies, they will feel themselves in familiar territory. For, although uncovering a murder indeed commences the story, the true delight of the novel is peeking behind the curtain of suburban life. What one sees there goes beyond the usual dream of white picket fences, manicured lawns, and the perfect, ideal family.

Michelle Mastro works as a writer and editor. She loves all things horror, suspense, thriller, and mystery. Her favorite detective of all time is Miss Marple.