March 10, 2021
Inspired by a haunting true story, Emma Stonex's The Lamplighters is an atmospheric novel about the mysterious disappearance of three lighthouse keepers from a remote tower miles from the Cornish coast—and about the wives who were left behind. 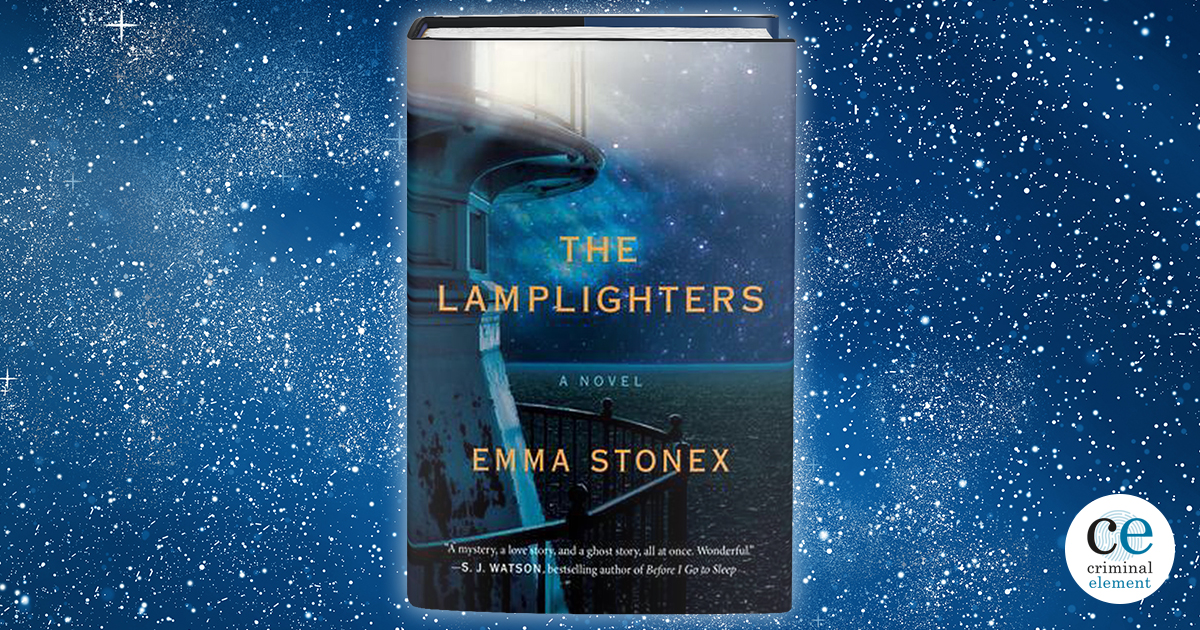 In December of 1972, three men disappeared from a tower lighthouse off the English coast. When the relief team arrived, they found the door barred from the inside. Dishes were set out for two at the kitchen table. Both clocks had stopped at a quarter to nine. And there was absolutely no trace of a struggle—everything had been perfectly polished and cleaned.

Twenty years have passed and the Maiden Rock Mystery remains unsolved. Numerous theories have been posited over the years, some grim but prosaic, others far more outlandish.

Perhaps one man killed the others, then himself, as the Trident company has strongly suggested. Perhaps all three were seized by a suicidal impulse. Maybe a monster attacked, or the sea swept them all away. Some swear they’ve seen a trio of white birds hovering over the light, and believe the men were transformed by some supernatural power.

I’ve heard it all, over the years. Arthur was abducted by aliens. He was murdered by pirates. He was blackmailed by smugglers. He killed the others, or they killed him, and then each other and then themselves—over a woman or a debt, or a washed-up treasure chest. They were haunted by ghosts or kidnapped by the government. Threatened by spies or gobbled by sea serpents. They went lunatic, one or all of them. They had secret lives no one knew about, riches buried on South American plantations you could only find by a cross on a map. They sailed off to Timbuktu and liked it so much they never came back… When that Lord Lucan disappeared two years down the line, there were those who said he’d gone to meet Arthur and the others on a desert island, presumably with the poor beggars who flew through the Bermuda Triangle.

I mean, honestly! I’m sure you’d prefer that, but I’m afraid it’s all ridiculous. We’re not in your world now, we’re in mine; and this isn’t a thriller, it’s my life.

An author long intrigued by the mystery is interviewing the women the lighthouse keepers left behind: Helen, still hopeful for closure and peace; Jenny, a bitter mother consumed equally by grief and guilt; and Michelle, who wishes that her boyfriend’s tarnished name could someday by cleared. Through these interviews, long-buried secrets and personal tragedies are uncovered, filling in some of the gaps in the old story.

At the same time, back in 1972, the men—Arthur, Bill, and Vince—tell their own tales of the days leading up to their disappearances. They’re not just trapped in the tower; they’re also ensnared by past sins, previous mistakes, and growing resentments. Each man has his own heavy burden to carry, burdens that cannot be set aside like their wet coats.

Life ashore feels wrong to me. I’m thrown by the unsteadiness of it all. Telephones ring unexpectedly. Local shops sell two types of milk and I can’t decide which to buy. People tell me their news in detail… knowing it won’t make the slightest bit of difference to me. In that way it’s only ever a halfway house, the land life, in that I’m there but not there, like going to a party full of people I’ve never met, ignorant of the dress code and having to leave before midnight.

When I’m ashore I have to pretend to be a man I’m not, part of something I’m not part of. It’s difficult to explain it to normal people. Lighthouse worlds are small. Slow. That’s what other people can’t do: they can’t do things slowly and with meaning…

So, what actually happened to the Maiden Rock trio? Was it an accident, a twist of fate, a bit of dumb bad luck? Was it the work of a supernatural force, a haunting gone wrong? Or was it an act of murderous malice and greed?

Was it all three?

Emma Stonex has delivered a real puzzle box of a story with The Lamplighters. She tantalizes us with allusions to greater reveals, subtly peppering the many narratives with hints and clues, drawing out each thread until it’s taut enough to snap. The answer to the central mystery—what happened to the lighthouse keepers?—is revealed only when the secrets of each man’s life finally intersect.

The slow yet steady unwrapping of each piece of plot is exceedingly well done; Stonex knows how to pull us in deep, until we feel just as ensnared and claustrophobic as the characters. Her prose is like the sea around the Maiden: beautiful, unpredictable, and substantial. The broody atmosphere is almost tangible at times, often as heavy and foreboding as the inescapable catastrophe.

With a small cast of not entirely likable characters, Stonex successfully makes us invested in what happens (and what happened). We know going in that this is a tragedy, and it turns out to be even more tragic than the initial description would have us believe. But despite the many traumas, the persistent grief, and the injustices we discover, The Lamplighters is not entirely bleak. There’s an elegiac beauty to be found here that brings to mind the poetry of Poe or Dylan Thomas.

And while much of the novel is inspired by history—particularly the Flannan Isles Disappearance of 1900—Stonex has also included just enough otherworldly strangeness to give The Lamplighters an eerie campfire air:

Normally when people come on, they know they’re not part of it. This is our world they’re in, so they have to toe the line… But there’s an unnatural feeling about Sid. I can’t say what. His voice is high-pitched for a bloke and for someone that big; it’s not entirely like a woman’s, but not far off. It doesn’t sit on him, like it doesn’t belong to him…

…Eventually, I get Sid down to the generator. His hair is the strangest color, almost white but not quite, and not the white that comes with age. There’s a tremor of recognition in a dark part of my brain, but it breaks apart when I reach for it.

I don’t like how he looks at me, as if he knows every thought I ever had.

The Lamplighters is a tale with teeth, serrated like a shark’s. Once it’s got a hold of you, it doesn’t let go. This is a haunting mystery where the unsaid words, the unshared emotions, and the unfulfilled lives reverberate across the decades not unlike the ghosts rumored to haunt the tower lighthouse. And whether you prefer an atmospheric sea-set mystery or an unsettling story of madness and the mythic, this is a book that’s sure to satisfy.