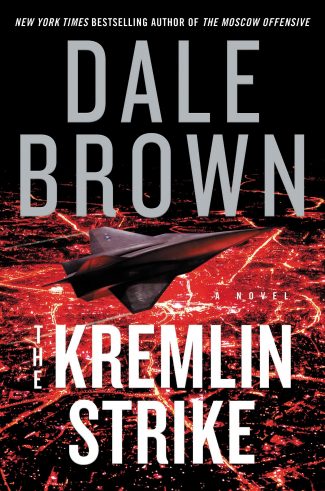 Space is the battlefield in The Kremlin Strike by Dale Brown, the fifth book in the Brad McLanahan series, which shows that obtaining military superiority over Earth’s orbit could give a country frightening power.

Political opinions aside, it’s hard to argue against the United States having a Space Force as an official branch of the military after reading Dale Brown’s The Kremlin Strike. This military thriller is loaded with pulse-racing action as the United States and Russia battle for control of the ultimate high ground: Earth’s orbit.

This is the 22nd book in Brown’s McLanahan series, which started in 1987, and the fifth in the series following lead character Brad McLanahan. Most of the novels highlighted aerial combat, an area that Brown, a former U.S. Air Force captain, knows well. Recent titles, Starfire and Iron Wolf, delved into space and robotic warfare, respectively. The Kremlin Strike ramps those elements up past the stratosphere, yet the technology Brown features seems attainable within decades, if not sooner. So this is more of a futuristic thriller than pure science fiction.

Ruthless Russian President Gennadiy Gryzlov has directed Aerospace Forces commander Mikhail Leonov to build a terrifying space battle station called Mars One. From its orbit high about the Earth, the station can pick off satellites from thousands of miles away with a devastating plasma gun, obliterate targets on Earth with virtually unstoppable missiles at hypersonic speeds, and pick off any attackers with lasers. Mars One swats away rockets like flies, and can level virtually any building on Earth.

Even more worrisome for U.S. President John Farrell, Mars One could easily knock out defense satellites one by one, threatening to blind the country to a Russian attack. By the time they realized the missiles were in the air, it would be too late to intercept them.

And for fans of cell phones, know they won’t work very well without satellites.

In a video conference call with Gryzlov, the Texas-born President finds the U.S. military may no longer command respect:

“You’d better get one thing straight,” Farrell warned flatly. There was a time for polite circumlocutions of ordinary diplomacy and there was a time for plain talking. “There is no goddamned way my government will sit back and let y’all walk all over the United States. Stacy Anne Barbeau’s politics of appeasement and weakness are yesterday’s news. Keep pushing us and you’re liable to end up spitting teeth.”

Gryzlov smiled thinly. “Do not make threats you cannot back up, Mr. President. It is unseemly, even embarrassing. Whether you understand it yet or not, the world has shifted beneath your feet. Now, thanks to powerful weapons and revolutionary technologies about Mars One, Russia dominates space. And we will exercise this power as required to protect our people and our national interests from American aggression.”

Those are chilling words for a U.S. leader who isn’t used to being at the mercy of a foreign power.

The President can lean on a private organization that comes to his aid. Scion, led by former President Kevin Martindale and series hero Patrick McLanahan, employs an intelligence network with agents in Russia, a space plane program called Sky Masters, and a collection of robots capable of fighting in space.

The problem is Mars One could shoot the space planes down before they close within 1,000 miles, as long as the station’s weapons have enough charge.

After the first part of the novel sets up the grave scenario, Brown’s story accelerates into suspenseful aerial combat, both on Earth and in space. The action is given more emotional consequence from the love between two of the key pilots, Brad McLanahan (Patrick’s son) and Nadia Rozek. It’s not easy to watch your love interest strap into a rocket plane headed into space, where parachutes aren’t any help.

Even though this series, and some of the characters, has been around for decades, the dangers they face in The Kremlin Strike are so lethal that there’s real fear for their lives. Once these planes are in the air and the reader is brought into the cockpit, this book is virtually impossible to put down.