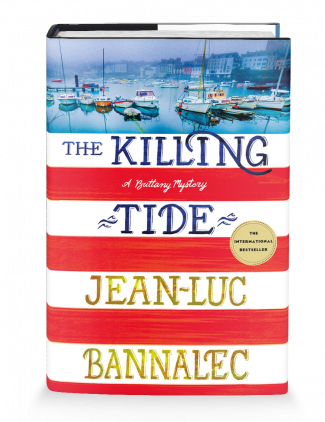 The Killing Tide is Jean-Luc Bannalec’s fifth novel in the Brittany Mystery Series set in the small coastal community of Brittany, France.

Five years ago, I read the first of the series, Death in Brittany, but I haven’t read any of the series since.  In the series opener, Dupin was a recent transplant from Paris to Brittany, having been sent to France’s northwest coast by his superiors because of “certain disputes he was having with those ranked above him on the force.  By now, for his new case, as one would expect, Dupin has settled into his rugged, coastal environment, but the murder that kicks off his investigation takes him as far afield as one can go even in this ancient Celtic landscape.

In the pre-dawn hours just after the summer solstice, a young woman in her mid-thirties is found with her throat slashed. She lies inside a container in the fish auction hall of Douarnez harbor.  Douarnez is a town with a written history dating back to the 12th century, and with its wide harbor a direct gateway to the Atlantic Ocean, it has been at the center of Breton’s fishing history as far back as Gallo-Roman times.  Fishing has a long and complicated history for Bretons, and as the book’s narrator tells us – Bannalec employs the limited third person viewpoint throughout – you cannot underestimate its importance to the region:

Fishing was a huge affair in Brittany. Anyone who regularly read Ouest-France and Le Telegramme – and Dupin did so with particularly strict regularity – came across news from the fishing industry every day. Almost on a par with agriculture and tourism, it was one of the most important branches of the economy, a proud Breton symbol: nearly half of France’s fishing catch came from Brittany.

When a second woman fisherman, acquainted with the first victim, is discovered with her throat cut, Dupin comes to believe that the case must have something to do with what is going on among various players involved in the area’s fishing work. But then the killer murders an old man, a retired professor who has been living alone in Brittany since moving there from Paris. Dupin is thrown for a loss. A difficult case among hardy people disinclined to talk about their own to the police becomes that much more confounding.

Dupin is a quietly dogged investigator. He relies on coffee for fuel and, though he loves to eat, relishing the wonderful seafood dishes Bretons cook, he often goes for long stretches without meals. He is focused and intelligent, if not astonishingly brilliant – a believable detective in every way. He has a small group he commands, and since he remains something of an outsider in Brittany, he relies on his subordinates to provide background on the places they are poking through. For this case, as a matter of fact, he frequently receives more information than he asks to have. His assistant, Riwal, when given an opening, can seldom restrain himself from telling stories about Brittany’s past. Brittany is a region that seems to live in the past as much as it does in the present, and it has myths and folk tales galore. There is the one about the city of Ys, built off Brittany’s coast and ruled by a King until court intrigue led to the ocean flooding and submerging the city. And there is the region’s most famous tale, that of Tristan and Isolde, which takes place on the actual island of Tristan, right off Douarnenez. Both before lighthouses existed and after their construction, shipwrecks have been common in Brittany because of its storms and dangerous reefs, and with shipwrecks have come all the stories about sunken treasure and mysterious finds. Was it true that this deep-sea fisher found a certain priceless item? And if so, what happened to the item? Where did the person hide it? It is through this atmosphere rife with gossip, rumor, and legend that Dupin must negotiate, but he also learns that the region contends with distinctly modern issues — foremost among them environmental concerns.

The second murder victim was a dolphin researcher working in a sanctuary called the Parc Iroise. Dupin listens as a Breton local describes it as “a remarkable maritime park”.  It has one hundred and twenty types of fish living there, both dolphin and seal colonies, and the largest algae field in Europe. It’s designed to be a model for a balance between “human use of the sea – fishing, algae, harvesting, leisure, and tourism” and “a functioning ecology, protection of the sea”, but that model is not one that everybody living in the area supports. Some people value profit above everything else. Dupin understands this, and dry though he can be in his manner, he comprehends the difficulties that people who survive off the sea face.

There were several factors at work causing trouble for the Breton fleet: overfishing, the destruction of the seas by industrial large-scale fishing; the rising temperature and pollution of the oceans – causing serious damage to fish stocks; climate change and the associated quirks in the weather which led to ever-diminishing catch sizes; the brutal, almost lawless international competition; fishing policies that had long been failing, on regional, national, and international levels; fierce arguments, bitter quarrels and conflicts.

Brittany, we see, is a place in flux, at war with itself in some ways.  And The Killing Tide explores a number of ecological and economic questions, but it does so with skill and restraint, never resorting to the type of lecturing that would seem inorganic to the story.

Less stellar is the novel’s pacing. Bannalec does take his time. A pure linear procedural, the novel occurs over two days, and the author spares us virtually nothing that Dupin does over the course of those two days. His every movement, sensation, doubt, assumption, counter-assumption, and imagining is recorded. I found myself reading for extended periods in an odd state somewhere between peak interest and tedium, and perhaps that’s the effect the author is trying to achieve. Maybe this feeling reflects what Dupin feels slogging around on his case. Yet I couldn’t help but think that Bannalec could learn a thing or two about what to leave out, and I kept going back in my mind to George Simenon books I’ve read, and the Martin Beck novels of Wahloo and Sjowall, masters at describing investigative detail while using the art of ellipsis.

Bannalec is effective in how he evokes Brittany, letting you taste its sea-salt air, smell the ocean, and see the myriad colors the coastal light creates. But even here, he could benefit from using the principle that less is more. Not once, but twice, does he inform us that the ancient Romans, coming from the calm of the Mediterranean and its interior sea, referred to Brittany and its exterior sea, the Atlantic, as “the end of the world”.  The “craggy landscape”, “wild beaches”, “deep bright green”, “tossing, whipping winds”, “wide-open Atlantic”, the “sapphire blue, turquoise blue, pale blue, azure blue” – Brittany has an elemental beauty that can be overwhelming, but as description piled on description, I found myself skimming some paragraphs and hoping that the plot would pick up.

Overall, The Killing Tide is a readable mystery set in a fascinating place that the author brings to life, but for the next book in the series, let’s hope that Bannalec tightens things up a bit.