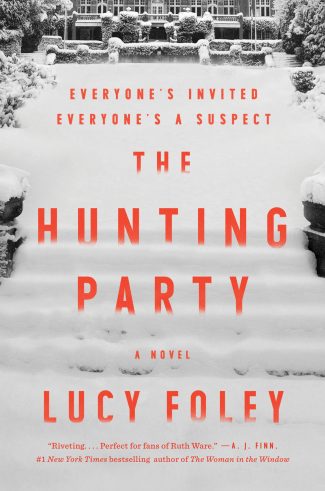 In Lucy Foley’s The Hunting Party, a group of old Oxford friends celebrates their annual reunion at a lodge in the remote Scottish Highlands. With an impending blizzard on the way, the nostalgia ends abruptly when one of them is murdered.

Anyone that’s read Agatha Christie’s And Then There Were None is familiar with the locked room mystery. It can go beyond a room, of course. If you’ve got a set group of people in an isolated setting, you’re good to go. Kill one, and you’re off to the races! It’s an enduring format, and when it’s done right, it’s quite effective. When you drop the beleaguered cast in the middle of an unforgiving landscape, it’s even better, and that’s what Lucy Foley does with the poor folks in The Hunting Party.

Getting together every New Year’s is a tradition for a group of Londoners who became close during their Oxford days. This year, mousy Emma, a later addition to the group of friends, has arranged a stay at a remote hunting lodge in the Scottish Highlands. We’re talking 50,000 acres. It’s cold. It’s dark. And most importantly—it’s isolated. These folks are lucky if they get one bar of service on their cellphones, and to cap it all, there’s a pending threat of a snowstorm.

Emma herself sets the scene:

I take the brochure out of my bag again. A thick card, expensive affair. It shows a fir-lined loch, heather-red peaks rising behind; though they may well be snow-covered now. According to the photographs the Lodge itself—the “New Lodge,” as the brochure describes it—is a big glass construction, uber-modern, designed by a top architect who recently constructed the summer pavilion at the Serpentine Gallery. I think the idea is that it’s meant to blend seamlessly with the still waters of the loch, refelecting the landscape and the uncompromising lines of the big peak, the Munro, rising behind.

Aside from Emma and her boyfriend Mark, along for the ride is the beautiful Miranda and her husband Julien; Nick and his American boyfriend Bo; Samira, her husband Giles, and their baby Priya; and Katie, who came without a significant other. Supposedly, the only other people on the property are Heather, the manager, and Doug, the gamekeeper.

It’s revealed almost immediately that Doug has found a body on the ground, but we don’t know who has died. The narrative then jumps back to three days earlier, when the group first arrived, and then works its way up to the discovery of the body and the aftermath. Switching to Miranda’s perspective, the prose makes it clear that she’s not completely comfortable in such a remote environment:

I’m suddenly very aware of how visible we would be from outside, lit up like insects in a jar…or actors on a stage, blinded by the floodlights to the watching audience. Anyone could be out there, hidden in the blackness, looking in without our knowing.

For a moment the old dark feeling threatens to surface, that sense of being watched. The feeling I have carried with me for a decade, now, since it all began. I remind myself that the whole point is that there is no one out there. That we are pretty much completely alone; save for the gamekeeper and the manager—Heather—who’s come in to welcome us.

Using multiple narrators isn’t easy, but Foley wonderfully juggles all of her characters’ perspectives. Besides Miranda, there are narratives from the viewpoints of Katie, Doug, Heather, and Emma.  We learn that Doug is hiding from a very dark past, and Heather is running from a tragedy. Miranda and Julien are considered the “golden” couple to their friends at the outset, but Miranda has the tendency to be a bully, and it becomes obvious fairly quickly that all is not well in their marriage.  But Emma, who continues to adore Miranda, has gone to great lengths to organize this gathering, and dammit, it’s going to go well. She’s a gifted chef, but I’m fairly sure that murder wasn’t on the menu. Maybe. Aren’t unreliable narrators fun?

If you’re worried about keeping the storylines straight, don’t be. Foley is a gifted storyteller, and she humanizes characters that aren’t at first likable (see Miranda and Mark.) My favorite character is the quiet, brokenhearted Heather, who dutifully tries to cater to a group of people that would test anyone’s patience. You’ll probably recognize a little piece of yourself in just about everyone, whether you want to or not, and although flawed, these characters are very human. To say that their bonds of friendship will be tested is an understatement, and you’ll be on pins and needles in the last act, even if (you think) you’ve figured out the likely culprit. Oh, did I also mention that there’s a serial killer on the loose?

This one is just pure escapist fun.