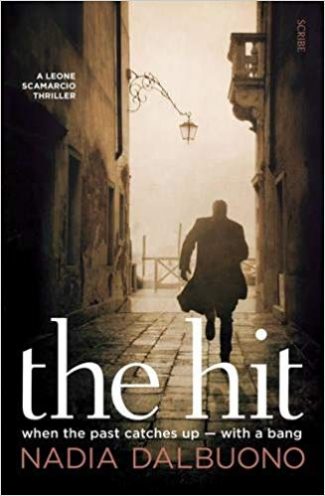 Detective Leone Scamarcio is in a jam. While still a teenager, he left Calabria and the ‘Ndrangheta he grew up in, encouraged by his grieving mother after the violent death of his father, a capo in the local mafia. He finished his education in Rome before joining the police force, in direct rebuke of his origins. Honest and dedicated, he climbed the ranks and made detective in Italy’s famed Flying Squad.

In the course of the events of the first two books of his namesake series, he was forced to turn to someone he thought of almost as family for help. Piero Piocosta was his father’s closest friend and right-hand man, and Scamarcio thought he could ask Piocosta for protection when the life of someone he loved was threatened by a rival gang. Piocosta was only too happy to oblige, but Scamarcio is now learning that any help from the criminal underworld comes with a price. Piocosta wants a favor done, and integrity aside, Scamarcio knows that even a simple favor could cost him everything, as his bosses always have an eye on him due to his family background. Though they’re not the only ones, as Scamarcio is notorious back in his home region too, for all the wrong reasons:

His face was known down there ever since the national papers had run pieces on how he was Italy’s big bright hope. Far from being a beacon of honesty and progress, the way Scamarcio’s cousins and uncles saw it, he was the worst traitor to have ever been born into their locale. That one of their number might actually join the police, rise through the ranks, and make it to detective in the Flying Squad was so far beyond their field of reference that Scamarcio might as well have revealed himself as a Martian, put on Earth to monitor the behavior of humankind. How these cousins and uncles might react to him now, twenty years after he’d left, was difficult to predict. In certain villages, he perhaps risked being shot at first sight.

Fortunately or otherwise, Scamarcio has cases to take his mind off his increasingly sticky situation with Piocosta. Foremost among these is the case of Micky Proietti, a hotshot television producer who, with his family, was the victim of a hit-and-run. So far, so much work for the traffic police, but when the ambulance that took Mickey’s wife and son from the scene disappears en route to the hospital, the case takes a much darker turn.

Micky is cagey at best in his cooperation with the police, and as Scamarcio investigates, he soon finds out why. No one really liked the guy, but the real surprise is the sheer breadth of society from which his detractors are drawn. From fellow producers to ambitious starlets, from star Serie A athletes to cabinet ministers, everyone seems like they have a grudge. One of these producers explains why when Scamarcio comes calling to inquire about Micky:

‘He’s an arsehole; possibly a sociopath. He has no consideration for people or their feelings. Now, if I’m honest, neither do I, but at least I make an attempt to hide it, to play the game. Micky doesn’t bother. Add to that the fact that he’ll pay you as little as he can get away with, and he’ll pay you late. Then add to that that he’s probably slept with your wife, mother, daughter–God knows, maybe your pet poodle…’

‘Has he slept with your wife?’

Scamarcio’s mind went blank for a moment. ‘Your boyfriend?’

‘Not as far as I’m aware. My partner has good taste.’

As the kidnappers’ threats of violence begin to escalate, Scamarcio must race against time to find out who hated Micky enough to abduct his family. His frustration turns to fear when he realizes that this case might be linked to the past he’s been trying so hard to leave behind, and that Piocosta may soon have another reason to sink his hooks deeper into Scamarcio.

Nadia Dalbuono explores the many facets of contemporary Italian life represented by her characters with intelligence and wit, revealing and examining a cross-section of society with the skill of an anthropologist. She layers the twists and turns in her narrative, braiding the story of the Proietti kidnapping with Scamarcio’s own personal torments to create an engrossing thriller that throws up surprises right till the very end. I do wish we’d had a little more time with the masterminds behind the plot at the end of the book, as it would have been interesting to see their motivations fleshed out even further, but overall, it was a satisfying installment that paves the way for more in this series featuring our complex, conflicted investigator.