March 11, 2022
The Heights by Louise Candlish follows the aftermath of Ellen Saint's encounter with a man she was positive was dead... because she killed him. 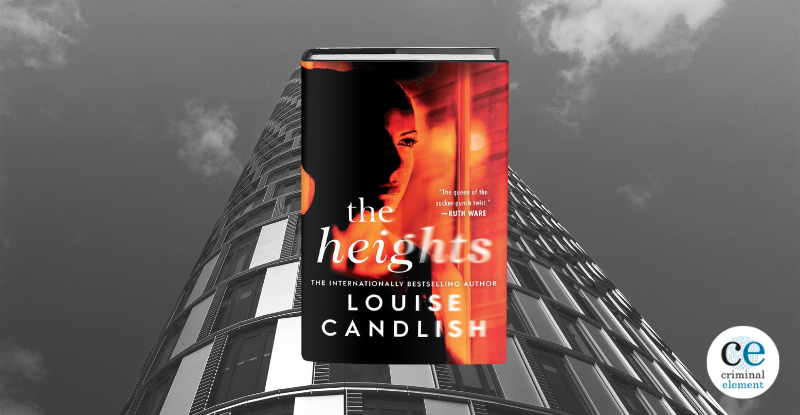 Louise Candlish writes just the smartest, most socially conscious thrillers! Her latest novels go for the gut when navigating real, modern social concerns while also making readers question who really is the bad guy in her narratives. The tension in her books ratchets up with the stakes, as her protagonists almost invariably find themselves careening towards a violence that will change their lives forever.

The Heights is no different, as our main narrator Ellen Saint must make hard and terrible choices in the course of seeking both answers regarding and vengeance for a devastating tragedy. She’s thought she’s moved on from what happened, maintaining healthy relationships with her extended family and pursuing a career she loves, working on interior lighting for primarily private residences. It’s while on one such job in a tiny apartment building that she looks up to see a figure perched on a dizzying rooftop opposite, causing her to muse aloud to her latest client about her own peculiar relationship with heights:

I find that my first thought, as it always is when I witness someone poised inches from a sheer drop like that, is, he’s going to throw himself off. He’s going to lean forward, look down and hear the call of the void, exactly as I would. Then he’ll jump.

I say as much to Selena and she exclaims in horror. “But why would he want to jump?”

“Not him, me. If I were standing where he is. Don’t worry, it’s nothing to do with feeling suicidal. It’s a condition. They call it high place phenomenon.”

“That’s more a sensation of spinning–like in the movie. This is a kind of irrational impulse. But not everyone has it.”

Their casual conversation comes to a screeching halt, however, when Ellen realizes that the stranger she’s discussing with Selena isn’t a stranger at all. As the man on the rooftop moves, she recognizes his gait and his build, even from a distance. Which is impossible, or so she tells herself, because that man is dead, and she’s the one responsible.

Of course, she never actually verified the lifelessness of his corpse for herself, a choice that will continue to haunt her as she begins to stalk this familiar figure, to see if the man she thought she killed has really managed to escape her justice and is walking around South London once more. Her loved ones tell her that she’s losing her grip on reality – the man has been missing, presumed dead, for years – but she knows that if this is really him then he needs to be held accountable, or at least more so than he already has been, for what he’s done.

Years ago, her beloved eldest child Lucas made friends with a rougher sort at school. Kieran Watts was every mother’s nightmare, a bad influence whom Ellen blamed for Lucas’ declining interest in studies and increased interest in partying. While her ex, Lucas’ father Vic, agreed with her about barring Kieran from their lives, her husband Justin thought she was being unfair, asking:

“Not if it gives him a free pass to screw with whoever he likes. This is part of the problem, Jus, he knows the school doesn’t dare punish him, he knows the parents don’t feel they can criticize him. They’re all too scared of looking like heartless rabid right-wingers. Well, I’m not–and nor is Vic.”

There was a flicker of irritation in Justin’s gaze. “You really think Kieran wouldn’t swap his free pass–if that’s really what it is, which I personally doubt–for the kind of life Lucas has had? Come on, you’re usually so kind, El.”

“It’s not my character that’s in question here!” Did I really need to convince my own husband of my decency?

Certain that Kieran is taking advantage of society’s leniency to get away with criminal mischief at best, and straight up moral corruption at worst, Ellen dedicates herself to trying to prove that he’s a bad person, in hopes of getting him out of her son’s life for good. Fast forward half a decade, and Ellen finds herself still consumed by thoughts of the young man who mocked her at every turn, who made her feel powerless and, if she’s guessing correctly, is still making a fool of her. This time, she swears, she’ll get to the truth and make sure the job is finished herself. But what will she sacrifice in order to accomplish her goals? And will her terrible attraction to the void cause her downfall in more ways than one?

I could not stop reading this terrific novel that really pushes on the panic buttons of middle-class parenthood and has readers asking themselves what they might do in similar situations. Especially for people like me who consider ourselves on the bleeding-heart-liberal spectrum of politics, the question of how tolerant we can be of bad influences in our childrens’ lives really resonated. Ms. Candlish works the particular fear of over-reaction with exquisite precision as she shifts back and forth through time and different perspectives in this propulsive thriller, to get to the truth of what really happened all those years ago, and what Ellen will do to make sure justice is served for all.